FITNESS ROCK & ROLL by Miss Amy Is Nominated for A GRAMMY® 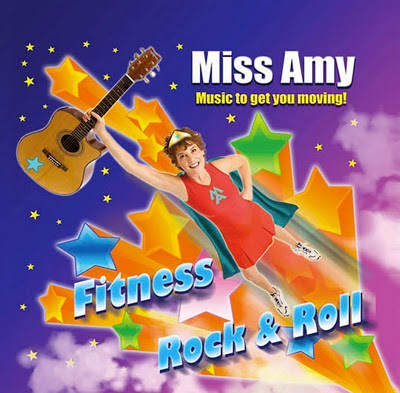 Miss Amy's FITNESS ROCK & ROLL has been nominated for a GRAMMY® Award for the 54th Grammy Celebrations to broadcast on CBS-TV and the internet at http://www.grammy.com on February 12, 2012.


Known as "The First Lady of Musical Fitness" by the National Children's Entertainment Guide, Miss Amy is THE Kids Rocker/Fitness Guru. This GRAMMY Nominated Featured Artist, Miss Amy also serves as an Official Advocate for the President's Challenge Program, and PC All-American in September 2010,  encouraging families to stay physically active through her warm engaging manner and positively enriching original music.

Honored to have performed at The White House Egg Roll 2010, Miss Amy is a singer/songwriter, an accredited music educator and a fitness instructor. She earned her BBA in Strategic Management at University of North Texas and her Certificate of Gerontology at Rutgers University. Additionally Miss Amy has over 20 years of fitness instruction experience being accredited for Kids & Teen Fitness, Yoga I & II, Pilates, Tai-Chi, Strength Training, Primary Aerobics and Pre/Post Natal Fitness, and she is a certified Youth/Adolescent Fitness Trainer.

As an Advocate for the President's Challenge Program (a program of the President's Council on Physical Fitness and Sports), Miss Amy encourages families to work toward earning the Presidential Active Lifestyle Award while inspiring and motivating young people to learn about their bodies and build healthy habits for life through her interactive Fitness Rock & Roll shows.

In addition to Miss Amy's nomination for FITNESS ROCK & ROLL, she's contributed work to the Wildflower CD (2010) in support of Women in Art in Pennsylvania and recorded on the International Baby 101 (English/Japanese/Spanish) project which earned the NAPPA Gold Award in 2004 and the Creative Child Excellence Award of 2006. Her I Wanna Know How It Works! song was included in the award-winning, WXPN Kids Corner, 20th Anniversary Celebration CD and ranked #5 for the Kids Corner top 10 songs of 2009. She has been featured in several books most notably; Singing; A Practical Guide to Pursuing the Art (The Performing Arts) (2009) for young adults by Rebecca Friskin and Shake & Shout: 16 Noisy, Lively Story Programs ( 2008) for children by Rob Reid.

An active member of the Philadelphia NARAS Chapter, Miss Amy also serves on the NJ Partnership For Healthy Kids committee, and volunteers with Musicians On Call at Children's Hospital of Philadelphia.

FITNESS ROCK & ROLL is the third album Miss Amy is on that's been nominated for a GRAMMY. She appears also on HEALTHY FOOD FOR THOUGHT: GOOD ENOUGH TO EAT, as well as on another project this year, ALL ABOUT BULLIES... BIG AND SMALL.