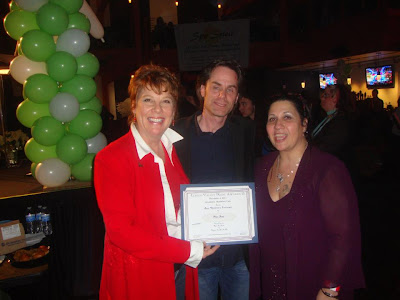 This past Sunday, Dec. 4, Amy won Best Children's performer in the Lehigh Valley Music Awards. She says, "Today Lehigh Valley, tomorrow the Grammys, and next year--all the kids of America will be more fit and rockin'!"

I don't remember what it was we said to each other the moment we met, but in the second moment, we each declared, "I love you!" to each other at the same time!  And by the end of the night, we were dueling splits on the floor together in a bar!

In addition to taking advantage of Amy's well-earned nomination, we're working on Amy's inner city schools' appearances where she performs dynamic work outs and concerts with the kids at the same time. Whether they're in the audience or on stage with her, for them Amy's shows have the same dynamic power we get from going to KISS and Garth Brooks' concerts. She's a 40-something year old Mom, with a sense of humor, inspiration, and wow!
Posted by Anne Leighton at 9:04 PM