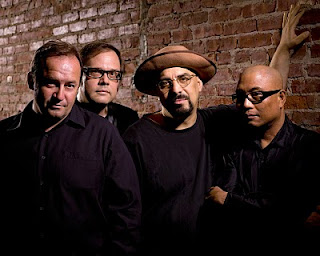 The concert is part of the Children's Charity Carnival & Ethnic Day Festival, which begins at 5 PM with special guest performances. Fireworks will follow The Smithereens. The event is free to the public.

In conjunction with the Festival, the group and their parents--many immigrants--will be honored. Very heartfelt is the story of The Smithereens' guitarist Jim Babjak and his parents who struggled in a Hungarian refugee camp.

Mayor Daniel J. Reiman will present the hometown heroes, The Smithereens with keys to the borough of Carteret. Says Mayor Reiman, “As some of New Jersey’s homegrown rock n’ roll heroes, the Smithereens will provide for a very special highlight to our already popular Ethnic Day festival, and allow for a memorable evening that will join them as a part of our local history." The phone numbers for the Festival are 732-541-3801 and 732-541-3817.

It all started at Carteret Park for the Smithereens 30 years ago with Babjak, drummer Dennis Diken, and original bassist Mike Mesaros (who is now living in San Frncisco and invited to the ceremony). Singer/guitarist Pat DiNizio joined a few weeks later. Bassist Severo "The Thrilla" Jornacion joined the group four years ago.

Recently the group released "The Smithereens Play Tommy," a tribute to the landmark rock opera The Who's Tommy.

The Smithereens has released 7 albums -- and reaching Gold and Platinum status along the way -- during their career, spawned several Top 40 radio hits, including, "A Girl Like You," "Too Much Passion," "Blood and Roses" and more. It's said that Nirvana's Kurt Cobain listened to the Smithereens as he wrote 'NEVERMIND."
Posted by Anne Leighton at 2:38 AM