Anne Leighton's MY BRAIN, THE PARK AND OTHER THINGS 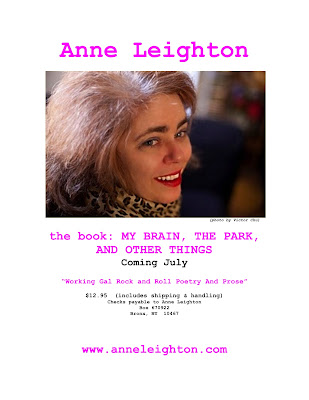 A heads up that my poetry and prose book, MY BRAIN, THE PARK AND OTHER THINGS will be published in July 2011.

The web page for it is up, and includes this downloadable flyer that you can share with friends and art lovers!

Here's the site: http://workinggalrockandroll.blogspot.com.
Posted by Anne Leighton at 12:52 PM

Singer-songwriter Jann Klose is part of a Grammy-nominated album put together and marketed by a coalition of musicians, poets, childrens health experts, entrepreneurs, and-- of course-- album producers. The album, HEALTHY FOOD FOR THOUGHT: GOOD ENOUGH TO EAT is up for a Grammy in the category: "Best Spoken Word Album For Children." http://www.grammy.com/nominees.

Everyone donated their time and talents to create this album, and are assisting the project's publicist Paula Lizzi in spreading the word about the album's release. All the profits from this project will go to the New York Coalition for Healthy School Food; www.healthyschoolfood.org. And the album has already made a profit with Midwest Books picking it up for distribution before the nominations.

There will be a CD release and fundraiser at the New York City studio of famed artist Peter Max on Friday, January 28. Tickets are $25, and available through the web site. http://healthyfoodforthought.com.

Klose's involvement comes from the heart, "I've grown up and traveled a lot in my lifetime already and see that people everywhere struggle with eating right. I think it's something we have to work very hard on. I personally try to cook as much as possible, using fresh and as many unprocessed foods as possible. It makes a big difference in taste alone!"

The Washington Post writes, “Klose wins over the listener with his soaring voice, which may well be a staple of chamber pop for a long time to come.”

A citizen of the world, Jann Klose has lived on three continents, making his home in the melting pot that is New York City. Before coming to the United States as an exchange student in Cleveland, Ohio, he lived in Germany, Kenya, and South Africa. During the course of his career, Klose has worked live or in the studio with artists ranging from pioneers like Pete Seeger and Les Paul to classic rockers like Roger (The Byrds) McGuinn, and Annie (Renaissance) Haslam to major country stars like Rosanne Cash and Marty Stuart, to award winning mentors like voice teacher David Gooding and producers Marlon Graves, and Stewart Lerman. He warranted endorsements from Martin Guitars and L.R. Baggs. WGN Radio's Steve & Johnnie, Rock Hall inductee Joey Reynolds and Jethro Tull's Ian Anderson have all personally lent a helping hand in his career.

In addition to the Grammy-nominated HEALTHY FOOD FOR THOUGHT, Klose's music has been heard on MTV's Cribs, the soundtrack to the Paul Sorvino film Dead Broke, or seen and heard him in touring companies of The Who's Tommy, Jekyll & Hyde, and Jesus Christ Superstar. He also has released three albums and two EPs, which can be heard around the world, on over 130 FM stations and Sirius XM in the U.S., the BBC in England to Prambors Radio in Indonesia. In the past half year, thousands have viewed (and reposted) Jann's remarkable video for DOING TIME, now featured on AOL/Spinner. Watch the video at www.youtube.com/jannklose

Time Out New York succinctly explained, “Jann Klose writes warm, hooky pop music.” The Advance Wire Service states: “The first thing that's totally unmistakable about Jann Klose is that voice - which is just light years beyond that of the typical singer-songwriter … a sound that is classy, distinctive and often irresistible.”

Jann Klose is available for interviews on his music, contribution to the album and ways he's helped his friends fight obesity. 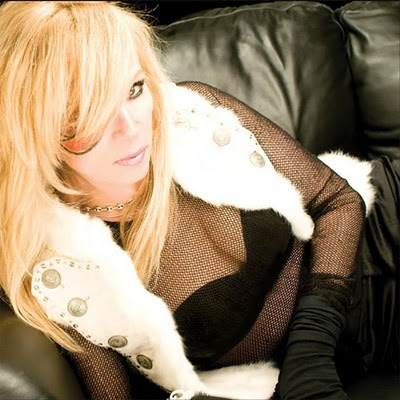 
"It is very sad that Gerry has passed. He had a long hard battle with alcoholism. Gerry was a consummate craftsman and gave a lot to the music world.

He leaves a brilliant legacy as a songwriter, so in his life he achieved
that. Our heartfelt condolences go out to his daughter Martha, his
granddaughter Celia and brother Jim."

Full story about Gerry Rafferty's life and passing at http://www.guardian.co.uk/music/2011/jan/04/gerry-rafferty-obituary
Posted by Anne Leighton at 5:51 PM