Meteorologist Dan Skof, who sometimes raps as MC Cumulus on his weather forecasts on  Northwest Arkansas’ NBC affiliate KNWA, says he "digs" the song, “Love the chorus when the harmony kicks in! Nice play on words too. it really isn't about the weather, but a "fair weathered friend!" I love the feel of the video too, feels very much like New York (obviously since it was shot in New York).”

The “Fair Weather” video was created by DeAngela Napier, who has produced and directed other Gary & Jann videos. The video combines footage of the musicians’ hometown with favorite photos of them in concert. Watch “Fair Weather” at https://www.youtube.com/watch?v=dDe9xLk-q3g.

Gary Lucas & Jann Klose are traveling musicians based in New York City. Gary just came back from Mexico, and Jann from California. In a few weeks, on Monday April 18, Jann will perform in Nashville at the Nashville Film Festival’s “Will Gray Blueprint” after-party for Will’s film, BROKE, sponsored by The Listening Room Cafe. Gary will be in Chicago at City Winery’s Downtown Sedar.

Gary & Jann reconvene later in the month to perform at the CDO (Chief Digital Officers) Conference at the Reuters Building in Times Square, New York City on April 27. On April 30, the two head out to the Hamptons to help kick off new summer concerts happening this year at the Stephen Talkhouse.

Gary received a Grammy nomination for co-writing “Spider Web” with Joan Osborne from her triple platinum album, RELISH. He co-wrote Jeff Buckley’s signature songs “Grace” and “Mojo Pin” from the singer’s double platinum album, GRACE. ROLLING STONE says Gary is “One of the best and most original guitarists in America…a modern guitar miracle.” He just received the Premio Ciampi Lifetime Achievement Award in Italy, named for one of Italy’s most famous songwriters. In 2014, Gary received the Ambassador’s Award for Cultural Diplomacy from the U.S. Consul General in Milan Ambassador Philip T. Reeker. His long-awaited GARY LUCAS’ FLEISCHEREI: MUSIC FROM MAX FLEISCHER CARTOONS will be released on Cuneiform in February 2016. He is currently collaborating with Steve Kilbey (The Church), and Chris Shinn (new lead singer of Live), and was (Fall 2015) Music Director of “State of Grace,” a multi-artist Australian tour that paid tribute to Tim and Jeff Buckley.

Born in Germany and raised in Kenya, South Africa and the United States, Jann Klose is currently collaborating with Ann Hampton Callaway, Renaissance’s Annie Haslam, Hall & Oates’ John Oates and The Yardbirds’ Jim McCarty. ) He appears in the award-winning Australian feature documentary A VENUE FOR THE END OF THE WORLD just released on BrinkVision, USA.  In 2015 Jann and his music appeared in the short film THE BEAUTY OF DISASTER (Glimmer Girl, USA). His most recent album, MOSAIC won three 2014 Independent Music Awards and charted for several months on the AMA and Roots Rock charts.

Posted by Anne Leighton at 3:16 PM 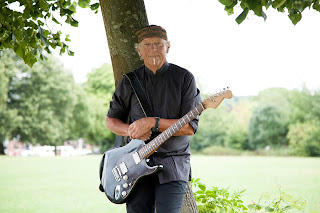 Martin Barre is returning to North America to perform more shows this April. Look for concerts in New Jersey, Maryland, New York, Connecticut, Illinois, Pennsylvania, and Massachusetts. More dates this fall in September and October. Some of them are confirmed below.

For the past five years Martin has toured the world with his own band to play the "classic" music from the Jethro Tull catalogue, and also many new tracks written by Martin from his albums AWAY WITH WORDS and ORDER OF PLAY, plus his latest album, BACK TO STEEL. BACK TO STEEL will be released in North America later this year on 71st Street Music.

For 43 years Martin Barre was the renowned guitarist of Jethro Tull, and his role in the band cannot be overestimated. Bruce Eder wrote on allmusic.com, “His playing has provided much of the energy that allows the band to soar on record and in concert.”

His unique sound and style contributed enormously to their success, which includes several chart topping albums, eleven gold and five platinum albums, a Grammy Award for CREST OF A KNAVE in 1988, and album sales exceeding 60 million units. Tull continues to be played worldwide, representing an important part of classic rock history.

Martin’s band features lead singer/guitarist Dan Crisp, drummer George Lindsay, bass player Alan Thomson. All members are committed to giving the Tull fans and a broader audience the chance to hear tracks not performed for many years with a few surprises along the way, as well as classic covers of a variety of folks, this past fall were songs by Porcupine Tree and Warren Haynes.

Blogcritics’ Jon Sobel caught the Martin Barre Band vibe in the intimate Rockwood Music Hall, and called them a “‘bar band’ in the best possible sense: The musicians were approachable and communicative, and looked and sounded like they were having a blast. Other moments felt like a badass progressive rock concert.“


Live performances including Tull songs, intriguing covers by the Beatles and Robert Johnson

Posted by Anne Leighton at 8:08 PM