Jann Klose’s “Reverie” continues to build in the U.S. and abroad Indie Pop Singer-Songwriter breaking new ground on the road and in the media

Jann Klose's album REVERIE is continuing to build momentum. The record has already become a critical favorite in regional America and is – as the LA Weekly states – becoming “a minor hit,” heard on over 100 radio stations worldwide, including Sirius XM Radio in the U.S., the BBC in the U.K. and most recently, Prambors Radio in Indonesia. George Graham just included REVERIE in his list of Best CDs of 2008 alongside Elvis Costello, Emmylou Harris, Buddy Guy and Peter Gabriel. Mr. Graham produces the longest running “Adult Contemporary” Radio show on WVIA FM in Pennsylvania.

Since the release of the album, Jann has opened for Michael Glabicki of Rusted Root and rising jam band Old School Freight Train. He performed with Renaissance's Annie Haslam and John Tout at the Sellersville Theater as well as with Rosanne Cash, Marty Stuart and Roger McGuinn at the Martin Guitar 175th anniversary concert. This winter and spring, Jann and his band supported Elliott Murphy on tours of the East and West Coast. The two are planning on more shows together later this year. Hits Magazine’s Roy Trakin calls Jann a “promising opening act.” This summer Jann will again be touring in the United Kingdom, Germany and in Ireland for the first time.

In addition to radio airplay and extensive touring – over 100 shows in 2008 alone – Jann and his band have been receiving positive press for REVERIE: The Washington Post writes: “Klose wins over the listener with his soaring voice, which may well be a staple of chamber pop for a long time to come.” Performing Songwriter says: “Born in Germany and raised in Africa, Jann Klose brings an element of world music to his adult-contemporary pop-rock. His latest record Reverie offers songs of thoughtful introspection and longing. Rich arrangements feature orchestral strings, jazzy horns and old-world accordion in addition to the standard bass, drums and guitar. Highlights include the melancholy 'Mother Said, Father Said' and Latin-flavored ‘Clouds.’”

Born in Mannheim, Germany, raised in Nairobi, Kenya and Johannesburg, South Africa, Jann spent his teenage years in Hamburg, Germany before coming to Cleveland, Ohio as an exchange student. He returned to Germany to fulfill mandatory civil service, and then relocated to Northeast Ohio, where he studied voice with Emmy winner David Gooding, sang in the Cleveland Opera Chorus, and released two CDs on local label G21 Records (1997’s ENOUGH SAID and 1999’s THE STRANGEST THING).

In 2000 Jann relocated to New York. He has since performed in Broadway touring companies of JESUS CHRIST SUPERSTAR and JEKYLL & HYDE as well as a regional production of THE WHO’S TOMMY. Songs from his 2003 EP BLACK BOX, produced by Grammy winner Marlon Graves, were licensed to the Warner Bros. DVD “Dead Broke,” featuring Paul Sorvino, car maker SAAB’s 60th Anniversary CD in France and Prambors Hits 3 in Indonesia. Jann now resides in the Bronx, New York.

Acoustic Strawbs-back in the USA, June 21

The Strawbs are touring as an acoustic trio this summer in the United States. Dave Cousins, the group's leader, is bringing his bandmates guitarist Dave Lambert and bassist Chas Cronk for 13 shows (eight with Van Der Graaf Generator, six on its own).

Formed first in 1965 at the Strawberry Hill Boys, the group soon included Sandy Denny who recorded an album's worth of pop-flavored songs written by Cousins, and the first recording of Denny's mesmerizing "Who Knows Where The Time Goes." Before a label could be found, Sandy decided her future lay elsewhere, and the album ALL OUR OWN WORK stayed in the can until PART OF THE UNION charted in 1973.

The Strawbs became the first UK act signed to Herb Alpert's A&M Records in 1969, and then added Rick Wakeman (who went on to join Yes), and Richard Hudson and John Ford on drums and bass respectively.

The 1972 ground-breaking album, GRAVE NEW WORLD brought Dave Lambert, and a harder rock style. The song "Lay Down" became a major hit for the group, and recently appeared on the BBC's TV show, "Life On Mars."

Hudson and Ford left, and former Nashville Teens' keyboardist John Hawken joined, with Stealers Wheel's Rod Coombes, and bassist Cronk. The classic album HERO AND HEROINE and GHOSTS were released. This five-piece lineup has toured the States over the past few years, tho' Hawken retired from touring in 2008.

This summer (2009) the Strawbs will be performing as a three piece, including songs from the Acoustic Strawbs' 2001 album, BAROQUE AND ROLL.

The Voice of America's Doug Levine sums the album up quite nicely, "Followers of the Great American Songbook are familiar with its timeless works of popular music by composers George Gershwin, Irving Berlin and others. Now, there's the Great American Soulbook. Many of Tower of Power's horn-driven hits, some dating back to the early 1970s, are now considered soul classics. But, after a 41-year run, the group decided to take a break from their usual offering of original funk and blues to pay tribute to their own musical heroes with an album called The Great American Soulbook." Read article at www.voanews.com.

Sonic Boomers' Bill Bentley also takes the "Songbook" angle, "It may be a stretch to call these dozen soul standards part of the great American songbook, but by this time in our country's culture when so much is up for grabs, why not? The well-oiled Oakland aggregation has been supplying the bump and jump at countless clubs and concerts for 40 years, building a loyal audience of young and old rockers and boppers. They have a supertight rhythmic attack that so much of rhythm & blues is built on, and a state-of-the-art horn section that should be patented it's so strong," at sonicboomers.com.

Tower of Power fan Jack Silva wrote a discography of the band's horn section, which is online at www.towerofpower.com/discography/hornsection/

As you know, TOP's members are very involved with educating musicians. The horn section runs clinics. Drummer David Garibaldi has made educational videos, Rocco Prestia's been covered in a number of bass publications. In general the band members offer great insight on finding and keeping sanity as performers. In July, TOP's trumpet player Mike Bogart is leaving the road to focus full time on teaching. He's being replaced by original TOP member/and a recent educator Mic Gillette. Mic was in the band 25 years ago, and will join the group at the band's gig at the San Mateo Fair this August. Once again, half the members of TOP are of the original lineup from 41 years ago.

STRATOSPHEERIUS: Less than Six Degrees of Separation with Famous and Little People!

Joe Deninzon & his wild jam band Stratospheerius are back to playing festivals and clubs this summer, and he's started mixing the group's CD, ONE FOOT IN THE NEXT WORLD.

Winter and spring have been busy seasons for Joe and his bandmates, with a variety of amazing projects. You might know that Joe and his wife Yulia Ziskel had a baby named Max this past January. Max enjoys cooing after he listens to people talking to him on the phone. Joe says that it's pretty easy to comprehend what babies and animals say, "it's when the babies start talking that we have problems understanding them!"

In addition to parenthood, sessions, jazz gigs, working with aspiring violinists, Joe's been writing an instructional book on violin improvisation for Mel Bay.

His bandmates have been part of groups with a variety of famous players.

Cevin Soling's THE WAR ON KIDS' documentary won "Best Educational Film" in the New York International Film and Video Festival this past April. The film shows how public schools have been taking away children's civil rights. More info--including a screener-- at www.thewaronkids.com.

When he's not touring with Jethro Tull, drummer Doane Perry has been working on a new album with his own band, Thread. The last one came out in the 1990s.

Jay and the Americans have festivals, fairs, and benefits this summer--visit the "show page" at www.jayandtheamericans.net.

The Fabulous Thunderbirds will be back in the States soon, which shows starting June 12 in Syracuse. Friend Kim Wilson, Randy Bermudes, Mike Keller, Johnny Moeller and Jason Moeller on myspace.com/fabulousthunderbirds. 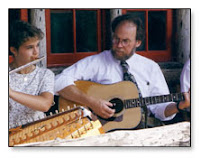 Dan Berggren, my radio teacher from Fredonia State, is coming out with a traditional folk record called NORTH RIVER, NORTH WOODS on Independence Day, July 4. He's made snippets of the album's songs available on his web site,
www.berggrenfolk.com.

Willy Porter, who's opened quite a bit for Jethro Tull, toured with Martin Barre, and has had a number of radio hits including "Angry Words," has a new album, HOW TO ROB A BANK, which is available as of June 2 from iTunes, Amazon, and also as a CD! Be a "Porter supporter" and interview Willy--contact Chris Web at 646-688-5442 and cwebb@weaselrecords.com. Web site: www.willyporter.com


A UK friend of mine named Neil Fishwick has a web site www.stillgigging.com that is looking for upcoming writers. Neil is seeking pieces on artists who are either classic rockers or have a classic rock sound.
Posted by Anne Leighton at 2:07 AM