Kodiak is working on new music, and making new friends.  Today is the release of the band’s new music video, GOODBYE.

A simple video with footage from the studio and the band’s stage show, the video is a great introduction to the band- - the Biggiani brothers—drummer Pete and guitarist Chris, bassist TJ Haefner, lead singer Eric Dalton.

The group is also releasing a new single, ALONE. Carmine calls it a “future classic rock song.” Pete says “it’s one of our favorite songs to play live.  ALONE is a very uplifting song it really lets you know that you’re never truly Alone. No matter how hard life gets or what you’re going through. There will always be someone somewhere to be by your side. I think it’s important for everyone to know that now and then. We will always be there not only for our friends and family but our fans too.”
Listen to ALONE at https://AWAL.lnk.to/AloneKodiak


The New Jersey based Kodiak are signed to WorldSound/AWal Entertainment, and co-managed by legendary drummer Carmine Appice and Warren Wyatt. Warren was responsible for careers of Crimson Glory, Saigon Kick, and Carmine’s “Guitar Zeus” album series!


10 years ago, Carmine began mentoring Pete, when he won a contest to appear in the drum legend’s instructional DVD, Realistic Rock for Kids.


Kodiak is releasing 3 singles this summer as they play festivals and make TV and radio appearances, plus live concerts, and get ready for an album later this year. 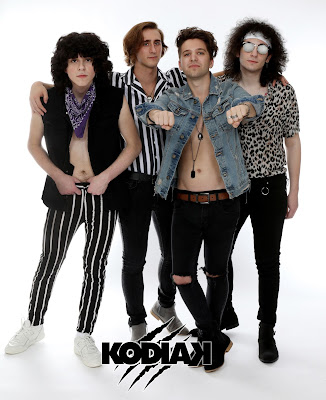 The Ballad of Jethro Tull is the hotly anticipated official illustrated history of the legendary prog rock band, due for publication by Rocket 88 Books in November 2019.


Today, Ian Anderson announced two new recordings have been created especially for the project. The first, The Ballad of Jethro Tull is a narrative poem written and read by Ian Anderson over a unique and original mix of classic Tull music, produced by Anderson himself – and named after the title of the book. The b-side is Ian reading Walter Scott’s 1808 poem, Marmion with musical backing composed for the recording and played by John O’Hara (current Tull keyboard player) on a cathedral organ.


The new 7” single will be exclusive to the 500-copy limited run Signature Edition, each copy signed by Ian, and encased in a hand-made box containing two art prints specially commissioned for the book from renowned artist Peter Klucik, who also created the cover design for the book.


The Classic Edition of the same book will have a higher print run, be available at a lower price point, and include a download code for the two new recordings.


In a specially recorded video for the website www.jethrotullbook.com, posted today, Ian Anderson, who is overseeing the project and has contributed unseen images and materials from his personal archive, said that the book is 'under construction' and available to pre-order now, for shipping in November.


Fans who pre-order now will be able to have their name printed in the finished book.

Posted by Anne Leighton at 9:51 PM

Kodiak Debuts With New Hard Rocker "Goodbye" Out on Worldsound/AWAL

With imagery of rain in the sky and tears, Kodiak’s debut single GOODBYE is a driven and determined single about wanting to get to the root of a breakup based on misunderstanding.  The song makes you believe that love can heal all wounds, thanks to the Biggiani brothers-- slamming drummer Pete and arousing guitarist Chris, along with supportive bassist TJ Haefner, and the passionate lead singer Eric Dalton.

“Everyone goes through this in their lives, including the four of us,” the band says about mending fences with a true love. Pete says all four of the band members wrote the song, starting on the guitar. “First Chris wrote the chorus riff. Then he and I both sit down and pieced the parts together. Then Eric who wrote the lyrics & TJ the bass parts…”
This NJ-based hard rock band is co-managed and produced by Carmine Appice, who chose Pete as the winner in his “Next Drum Prodigy” contest for his Realistic Rock For Kids DVD 10 years ago.  Now signed to WorldSound/AWal Entertainment, the group is releasing 3 singles this summer as they play festivals and make TV and radio appearances, plus live concerts, and get ready for an album later this year.
Kodiak have already turned heads with a number of hard rock/heavy metal legends VH1 / radio host Ed Trunk introduced the group, who played their first gig, opening for The Appice Brothers, at 2019’s Hall of Heavy Metal History Award Show Anaheim, California.  The group was compared to a young Van Halen!

There’s only clouds in our sky
Tears in your eyes
And by the look on your face
There is something you’re not telling
When I say your name
You don’t even look my way
Oh baby hear me out, what is it that you’re feeling?

"Just A Story From America--A Memoir" by Elliott Murphy

Elliott Murphy, legendary rock troubadour and a true pioneer of independent recording artists has finally published his long-awaited memoir, JUST A STORY FROM AMERICA. This rock and roll storyteller, who has been cited by artists as inspirational as Bruce Springsteen, Billy Joel and the late Lou Reed, and whose career now spans nearly five decades, was promoted by Columbia Records in 1977 with a full-page ad in Rolling Stone reading, “He could write a book, but he chose rock and roll instead.” The truth is that he has been doing both for years and in the process achieving international success and acclaim. Finally, his amazing story is told.


In 1973 posters were plastered all over New York City’s subway system proclaiming, “Elliott Murphy is going to be a monster,” when his critically-praised debut album, AQUASHOW, was first released. Perhaps his major label career didn’t take off as predicted, but his unique journey did include him becoming a rock star monster, before ultimately finding redemption in Paris, France with a thriving career, loving family and a trove of rock ‘n roll anecdotes and wisdom to fill this unforgettable and highly readable memoir.


In his honest, gripping and often humorous telling, Elliott describes a childhood of show biz affluence, the tragic loss of a famous father, a European sojourn where he encountered Federico Fellini and a love for the old world, and perhaps most provocatively, his journey through the mine-fields of rock stardom in which he fittingly calls true success in the music business as best measured in terms of survival. From the glam world of 1970’s Manhattan and fabled LA recording studios and on to what was left of swinging London before finally finding his home, love and a faithful public in Europe, Elliott Murphy’s memoir is a valuable addition to a growing essential cultural genre that now includes Bruce Springsteen’s Born to Run, Patti Smith’s Just Kids and Bob Dylan’s Chronicles.


JUST A STORY FROM AMERICA takes the reader on an insightful journey into the daunting world of the music business from the unique perspective of an internationally acclaimed artist you may never have heard of, even while songs such as Last of the Rock Stars, Drive all Night, and A Touch of Kindness travelled on radio-airwaves all around the world for decades. A moving and not often heard story told from the perspective of an artist who has gone from celebrity to anonymity and back again and lived to tell the tale.


Elliott Murphy has released over 35 albums of original music since his debut album AQUASHOW (1973) and continues to perform concerts in Europe, Japan, Canada and the USA. He stars in the upcoming feature film, BROKEN POET based upon his 1980’s short story which includes a rare cameo appearance by Bruce Springsteen and Patti Scialfa. The award winning 2016 documentary, THE SECOND ACT OF ELLIOTT MURPHY was selected for the prestigious Stony Brook Film Festival and his journalism has appeared in Rolling Stone (U.S.), Vanity Fair (France), and other international publications. He is the author of three novels, two poetry books, and numerous short-story collections.


In 2015 Elliott Murphy was awarded the Chevalier de l'Ordre des Arts et des Lettres by the French Minister of Culture and in 2018, Billy Joel inducted Elliott into the Long Island Music Hall of Fame, stating, “His songs are honest and literate and pure, and those songs have attracted audiences far beyond his country. I’ve long envied his bravery and integrity, and I’ve always admired his lyric skill.”

Posted by Anne Leighton at 4:55 AM

The Slambovian Circus of Dreams Tour the UK July


New York City based band The Slambovian Circus of Dreams are touring the UK in the first 2 weeks of July 2019.
Starting off as the almost heavy metal Ancestors in the '90s the band have taken all that is good in folk, country and americana with a twist of Pink Floyd flavouring.
The Slambovians have melded their own unique sound that is at once familiar yet almost impossible to pigeon hole. The Slambovian Circus of Dreams have such an eclectic live stage presence that once seen, always hooked. Rubbing regular shoulders with some of the icons of American music the band have got some serious endorsees.
Garth Hudson of The Band is a committed Slambovian disciple and fan describing frontman Joziah Longo as “An awesome songwriter”. Writers have quoted lyrical similarities to both Bob Dylan and John Prine. A close listen to their many albums and well attended live shows would bear out that comparison.
Well known as a touring band throughout the North Eastern States, the popularity of The Slambovian Circus of Dreams have earned them a virtual residency at many of the larger folk festivals.
Gary Lucas, outstanding guitarist with Jeff Buckley and early member of Captain Beefheart’s Magic Band is quoted saying "It was an honor and a privilege to play with the great psychedelic band The Slambovian Circus of Dreams". Had the stars aligned, Gary Lucas would have toured with the band given half a chance. Maybe next tour?
Dave Pegg, renowned bassist and long time member of Fairport Convention, co-curator of Cropredy Festival met up with Slambovian UK management, Jonti Willis recently and said we could quote him widely, “Love the band and the music (of The Slambovian Circus of Dreams)” – Dave Pegg Fairport Convention. He’s also going to endorse a recommendation for a Cropredy Festival 2020 appearance too.
The New York Times says…. “They Take The Stage By Storm” And so they do!