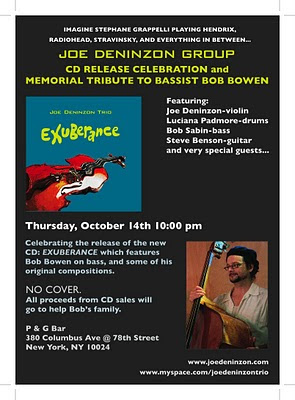 The Joe Deninzon Group will be having a record release celebration for its new album, EXUBERANCE at the P&G Bar, 380 Columbus Avenue (at 78th Street),in New York City, on October 14, at 10 PM. Admission is free. The venue phone is 212-787-5150. The web site is http://pandgbar.com/. This concert marks the Trio's public debut in New York City, although the group has performed at a number of private functions over the years.

"It will be a celebration," says Deninzon, "because we're remembering Bob Bowen," the Trio's bassist, who passed on early September, after being struck by a car while riding his bicycle in New York City.

Deninzon(violin) and Steve Benson (guitar), will have Bob Sabin (a friend of Bowen's) on bass plus drummer Luciana Padmore. There's be three sets--the last a late night jam with guest musicians. Bowen was a fixture on the local jazz scene. While admission is free, the sales of the EXUBERANCE CD at this event, plus donations to the tip jar will go to his two children. There've been a few fundraising concerts since his passing, and WKCR-New York presented a tribute to him.

Bowen played with Clark Terry, Lee Konitz, James Moody, Mark Murphy, Art Lande, Vassar Clemens, Roseanna Vitro, Mike Clark, Jack Wilkins, Eric Person's Metamorphosis, Tony Trischka and Joe Deninzon's rock group, Stratospheerious. He co-led the MOB Trio with drummer Matt Wilson and tenorman Ohad Talmor. Another collaborative project is Slog. Bob graduated Cum Laude with a BA in Music Composition from the University of Dayton, and studied in the classical double bass masters program at the Cincinnati College-Conservatory of Music, and has a Masters degree in Jazz Performance from the Manhattan School of Music. He was the bass instructor and director of the Jazz Combo Workshop at Hofstra University on Long Island NY, and helped develop the jazz prep program at the Center for Preparatory Studies in Music Queens College (CPSM), and the Manhattan-based Creative Music Workshop.

Bowen composed the album's title song "Exuberance In The Face Of Utter Anguish and Despair." The goal of the EXUBERANCE sessions was to capture the essence of three musicians in a room, playing live with no overdubs and a stripped down production. The Trio draws influence from jazz stylists including the gypsy explorations of Django Reinhardt and the hot swing of violinist Stephane Grappelli along with rock and pop standards of the past 50 years including compositions from Steely Dan, Alice in Chains, Radiohead, Jimmy Webb. “Sun Goes Down” (featuring Luba on lead vocals) is an original song by the trio that has been featured in the independent film, “What's Up Scarlet?” and a recent winner in the Jazz category of the Billboard and John Lennon International Songwriting Contests.

RELIX magazine wrote, “If the violin has a future in Jazz and Rock, it is with Joe Deninzon.” Best known for his work on the 7-string electric violin and as lead singer for STRATOSPHEERIUS, Deninzon has been called the "Jimi Hendrix of the elecric violin". He has collaborated with Bruce Springsteen, Sheryl Crow, Phoebe Snow, Everclear, Ritchie Blackmore of Deep Purple, Smokey Robinson, and Les Paul. He has also performed as a solo violinist with the New York City Ballet. His original music has been used on CMT, MTV, VH1, Comedy Central, National Geographic, the Travel Channel and the History Channel.He has taught rock violin at Mark O'Conner's String Camp in New York, and is writing a book about the electric violin for Mel Bay Publications.

Guitarist Steve Benson is one of the most highly demanded Broadway and session guitarists in New York, being comfortable in a variety of musical settings including jazz, classical music, rock, rhythm and blues, Broadway, bluegrass, and Klezmer music. He has performed and/or recorded with Phoebe Snow, John Sebastian, Dee Dee Bridgewater, Natalie Cole , Giora Feidmand, Jackie McLean, Jessica Simpson and Nick Lachey, The Metropolitan Opera Orchestra. The Philadelphia Orchestra, Orchestra of St. Lukes and the American Symphony Orchestra. He currently performs on Broadway in the orchestra pits of The Lion King, Chicago, Mary Poppins and Hair. He is on the jazz faculty at Montclair State University. 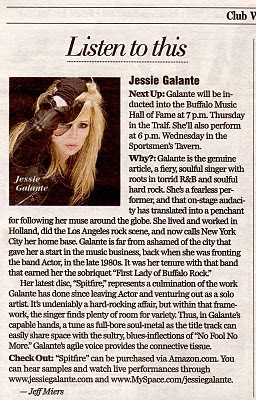