There are two links on the right side of this web page to videos for--if I could twist Casey Kasem's words--Tower of Power’s “short distance” dedication to an American soldier stationed in Iraq, who was able to get a leave to be with his wife at a show in Las Vegas.

This is the rest of the story.... A while ago, Tower of Power received an e-mail from Tim Lorenzen, who is in the army and stationed in Iraq. His request was for the band to possibly dedicate "You're Still A Young Man" to his wife Mona, who would be at the Orleans Casino show in Las Vegas on Saturday, March 7.

He wrote that TOP was their favorite band, and on their last day together they took a ride in his convertible, top down, listing to TOP music, despite the fact that it was raining.

Tim was able to get a leave, and come to the show, and surprise his wife with roses after TOP frontman Larry Braggs called her onto the stage.

Here is a link to the story on the band's message board! 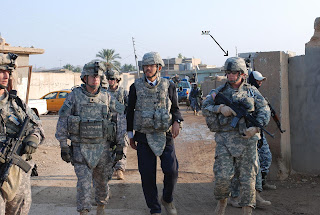 Tim Lorenzen (on the right) and his buddies in Iraq.

Tower of Power is coming out with a new CD April 7. It’s called The Great American Soulbook. I love the album, how it sounds and Tower of Power's signature take of the arrangements. Right now I'm grooving on Larry's interpretations--my favorite covers are “Me and Mrs. Jones” and “Heaven Must Be Missing An Angel.” He sings lead on those; the LP has guest singers who share vocals with him on a few songs: Sir Tom Jones, Joss Stone, Huey Lewis and Sam Moore.
Posted by Anne Leighton at 11:50 PM

I’m just starting to work with a great acoustic songwriting duo, Buskin & Batteau. The two have been working together since the late ‘60s, first in a group called PIerce Arrow, then as members of Tom Rush’s back up group. That’s were David Buskin and Robin Batteau ended up singing and writing songs together. Their most famous song is “Boy With The Violin,” which you can hear on myspace.com/buskinbatteau.

They have a lot of tour dates coming up. The duo have just put the finishing touches on their long-anticipated new CD, RED SHOES AND GOLDEN HEARTS, to be released by Nouveau Retro Media on April 1'st. (No fooling.) In their new album and in their performances, they continue to offer their audiences, in the words of The Washington Post, "an irresistible amalgam of melodic, sensual pop, folkie grit and killer wit."

Ian Anderson, known throughout the world of rock music as the flute and voice behind the legendary Jethro Tull will be touring this October and November in the United States. Ian is inviting a number of guests from the jazz, classical, rock, and world music world to share the stage for this eclectic acoustic tour.

Widely recognized as the man who introduced the flute to rock music, Ian Anderson remains the crowned exponent of the popular and rock genres of flute playing. In addition to classical flute, he also plays ethnic flutes and whistles together with acoustic guitar and the mandolin family of instruments, providing the acoustic textures, which are an integral part of most of the Jethro Tull repertoire.

When not touring with Jethro Tull, Ian Anderson appears more and more frequently in solo concerts with a variety of line-ups from the music world, including orchestral.

For the 2009 Ian Anderson Plays The Acoustic Jethro Tull, his band includes jazz artists: bassist David Goodier (Jethro Tull) and Mark Mondasir (John McLaughlin). Classical musician John O'Hara, who also plays keyboards and accordion with Jethro Tull will be joining the line up, as will German Rock and Flamenco guitarist Florian Opahle. Ian will have a range of other guests on this tour.

As a solo artist, Ian Anderson has recorded four diverse solo albums in his career: Walk into Light (1983), the flute instrumental Divinities (1995) which reached number one on the Billboard Classical chart, and the more recently recorded acoustic collections of songs, The Secret Language of Birds (2000), and Rupi’s Dance (2003).

In 2006, he was awarded a Doctorate in Literature from Heriot Watt University in Edinburgh, the Ivor Award for International Achievement in Music and, in the New Years Honours List 2008, an MBE for services to music. In 2008 he celebrated 40 years as a recording and performing musician. 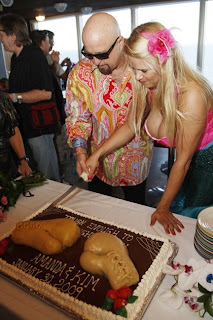 Congrats to Kim Wilson, lead singer and harpist of the Fabulous Thunderbirds. He married Amanda Taylor at sea, this past January 30, when the group had a cruise tour.

Photos of the wedding, including a shot of Dion serenading the couple and Amanda in a mermaid wedding outfit are online at the Thunderbirds site.


Though it’s going to be a while before the upcoming album from the Thunderbirds is released, there are parts of songs online at myspace.com/fabulousthunderbirds.

The group has a lot of international dates, but here are the North American shows this spring.

My American musicians! Grand Funk Railroad, Jay and the Americans

Jay and The Americans have dates online, as well, at the site. But the guys (Jay Reincke, Howie Kane, Marty Saunders, Sandy Deanne)are also encouraging folks to join the http://www.facebook.com/home.php#/pages/Jay-and-the-Americans/63380664448?ref=ts"_blank"> Jay and the Americans’ Facebook fan page.

John Lappen is working a new Keith Reid album, and Terry Reid is on it. Send a note to jlappen@earthlink.net .

In December 2007, I gave the Mark Freeland Award to Art Voice editor Jamie Moses at the Buffalo Backstage Music Awards. Mark was a very popular, dynamic, and super creative and off-the-wall songwriter in the Buffalo scene while I was working in radio back in 1980. He had passed on early that year, and the gentleman who sponsored the award (Ray Roehner) turned out to be in a Jethro Tull tribute band called Living with the Past. In June 2008 Living with the Past played a special show in Buffalo with former Tull bassist Dave Pegg. Living with the Past is releasing a DVD of the event, "Life's a Long Song - 40th Anniversary Tribute to Jethro Tull.” Artist Ed Unitsky is doing the DVD cover. It will be available at the http://www.universerecords.com website for $10 plus shipping. And for more information, here’s the e-mail: ray@universerecords.com
Posted by Anne Leighton at 10:48 PM 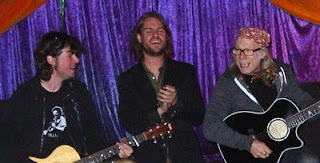 Of course the conclusion is Elliott and Jann’s music encourages the audience to come out of the early spring doldrums that the poet T.S. Eliot writes in the opening lines….

“APRIL is the cruelest month, breeding
Lilacs out of the dead land, mixing
Memory and desire, stirring
Dull roots with spring rain….”

And everyone will remember the show for years to come, including the performers. Desire? Well, everyone desires the best music around. Voila—Elliott Murphy and Jann Klose!

Elliott Murphy first came to prominence 35 years ago with the release of the now-more-relevant-than-ever album, AQUASHOW. That, along with NIGHT LIGHTS, LOST GENERATION, and JUST A STORY FROM AMERICA was played on mainstream radio throughout the United States. These albums were also picked up internationally, especially in Japan and Europe, where Elliott has found international stardom. 19 years ago he moved to Paris, France. Before his recent Northeast/California tour he last played the United States in 2000 at New York City's Bottom Line. Elliott’s full band, the Normandy All Stars will be on this tour—it features guitarist Olivier Durand, drummer Alan Fatras, and bassist Laurent Pardo.

Elliott has released 30 albums; his latest is NOTES FROM THE UNDERGROUND, which has received 5 stars on the prestigious music site, ALLMUSIC.COM. Some of the musicians who've collaborated with Elliott on his recordings are Bruce Springsteen, Billy Joel, Phil Collins, and the Rolling Stones' Mick Taylor. Elliott was also honored with a monumental exposition, LAST OF THE ROCK STARS-RETROSPECTIVE at Paris' Town Hall, and has been cited in literature in the work, SAVAGE DETECTIVES by the late Roberto Bolano, who now has a best-seller book called, 2666.

Elliott’s music is already being played on Sirius-XM's the LOFT, and he was the subject of a story on an upcoming Bob Edwards show on the satellite station. This spring will see the release of the French movie "La Ligne Blanche" in which Elliott appears as an actor.

Opening all dates will be Jann Klose, whose new album REVERIE is an independent release that has been picked up by over 95 radio stations, including Radio Caroline, Bob Harris' show on the BBC-2 and Sirius-XM's The Loft. Born in Germany, raised in Kenya and South Africa, Jann has collaborated on stage with Renaissance's Annie Haslam, songwriters Rosanne Cash, Marty Stuart, and Roger McGuinn. Upright bassist Chris Marolf supports Jann's set.

The tour has received praise in every city it's played so far from Boston, MA to Hollywood, CA.

The Schenectady Gazette's Brian McElhiney says, "Murphy gives hungry cadre of stateside fans what they came for." Indeed the fans are receiving more than their money's worth. One Boston fan blogged, "Murphy sang with the resilience of a survivor who will always continue to grow and change. His performance let us in on a taste of what his journey has been like. I know I felt changed by it. Murphy's show was a true rock 'n' roll baptism." A woman working in Washington, DC media had never heard of either artist, and her boyfriend was curious about the venue they played in. She said, "This was the most memorable night of rock & roll I've ever had. Both artists are great."

THE WAR ON KIDS to make debut, March 25, NYC

see trailer at this link for The War On Kids

THE WAR ON KIDS to make its film debut on March 25th in New York City.

THE WAR ON KIDS will be making its debut at the New York International Independent Film and Video Festival, on Wednesday, March 25, at 6 PM. The film will be shown at Village East Cinema's screen seven. Village East Cinema is located in the heart of the East Village at 181 2nd Avenue off of 12th Street.

THE WAR ON KIDS is a 99 minute documentary that shows how American public schools continue to become more dangerously authoritarian. In addition to failing in their mission to provide education, they erode the country’s democratic foundation and often resemble prisons. School children are interviewed as are high school teachers and administrators, and prison security guards, plus renowned educators and authors including:

Music in the film is performed by The Chumps, Tommy Gardner, John S. Hall, and Laura Mayer with Scott Grinthal.

THE WAR ON KIDS is directed by Cevin Soling who won the NYIIFVF award for best experimental feature film, THE WAR ON THE WAR ON DRUGS, in 2005. Cevin has directed and produced a number of films, including: RELAX IT'S JUST SEX starring Jennifer Tilly, Lori Petty and Cynda Williams; A HOLE IN THE HEAD, which was broadcast on Discovery and The Learning Channel; and URINE: GOOD HEALTH. He also created a number of animated works, including THE BILL JOHNSON SHOW, BORIS THE DOG, CAPTAIN STICKMAN, as well as the short film, DESTRUCTION.

The New York International Independent Film and Video Festival (NYIIFVF) was founded in 1993. NYIIFVF has been recognized by the film and entertainment industry as one of the leading film events on the independent festival circuit. The festival hosts film, music and art events in the two entertainment capitals of the United States: New York and Los Angeles.