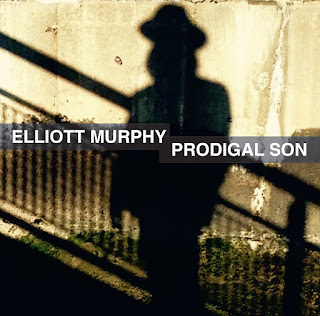 Elliott Murphy’s thirty-fifth album - PRODIGAL SON - is now available in North America on CD and Vinyl LP (Traffic distribution) as well as on Amazon, iTunes, streaming sites and other online stores. PRODIGAL SON is also out in Europe where it has received rave reviews including the prestigious French cultural mag Telerama.


PRODIGAL SON is Elliott’s first album of all new original songs in over three years and marks a daring step forward in both musical and lyrical terms from one of the most original and classic American rock singer-songwriters. Recorded in Paris’ Question de Son Studio (where artists such as Kanye West and Beck have worked while in Paris) Elliott is backed by his long-time backing band The Normandy All Stars (Alan Fatras, Laurent Pardo and guitar virtuoso Olivier Durand). Sadly, Laurent Pardo passed away just after the album was completed - in Elliott’s liner notes there is a heartfelt dedication.


PRODIGAL SON was produced, mixed and arranged by Elliott’s son Gaspard Murphy, an up and coming producer in his own right (Superbus / Warner Music France). The album features “Leon Russell-styled” keyboard work by Leo Cotton and evocative violin playing by Australian Melissa Cox. PRODIGAL SON was conceived and written with the idea of incorporating a gospel choir and the blend of these majestically soaring voices along with Murphy’s own on tracks such as “Wit’s End” is monumental.


Highlights from PRODIGAL SON include the anthem “Chelsea Boots,” the poignant love song “Let Me In,” and the touching story of a young girls coming of age “Hey Little Sister.” The album ends with Elliott Murphy’s longest song to date “Absalom, Davy & Jacky O” – a virtual film noir within a song – that clocks in at just over eleven minutes.


PRODIGAL SON follows the release of the film THE SECOND ACT OF ELLIOTT MURPHY featuring interviews with Bruce Springsteen (who says of Elliott Murphy: I don’t think he’s ever written a bad song” and Billy Joel (who says “I thought he was good as soon as I saw him”). PRODIGAL SON will surely go down as one of the amazing highlights of a storied musical career that began with AQUASHOW. (1973).


Elliott is available for interviews via SKYPE or email and also phoners.  He will be in the States, doing in-person interviews with the media on July 25-August 1. Along with THE SECOND ACT OF ELLIOTT MURPHY director Jorge Arenillas, he will make an appearance at the Stony Brook Film Festival on July 26 where the film will be shown. On Tuesday, August 1, Elliott performs an intimate solo show at New York City’s Rockwood Music Hall.

Posted by Anne Leighton at 6:11 PM