IAN ANDERSON'S OUT OF THIS WORLD FLUTE DUET

Stay tuned for Ian Anderson playing a unique flute duet live with NASA's Colonel Cady, who--AT 14.09 (2:09) EST heads off tonight on mission 26 to the ISS where she will rendezvous with Ian's flute which went up on a Russian supply rocket a few weeks ago. Says Ian, "We plan to play together - a space duet - in the New Year. Maybe Gagarin day - the 50th Anniversary of the first man in space on the 12th April."

The Revolution in Music, Space, and Air will be Televised on NASA TV.

I'm on an album, HEALTHY FOOD FOR THOUGHT: GOOD ENOUGH TO EAT that was nominated for a Grammy in “Best Spoken Word Album for Children.” Also on the album is my artist Jann Klose, and former client Uncle Floyd, plus friends Beatle Bob, Michael O'Keefe, radio host Gene Shay, plus Moby, Sweet Honey in the Rock, Julian Lennon, and Tom Chapin. The album's creators are Kevin Mackie, and producers Jim Cravero, Paula Lizzi & Steve Pullara. It took Kevin and company over two years to put together this album. It is very well done.

On January 28, there'll be a record release party for HEALTHY FOOD FOR THOUGHT at Peter Max Studios, in New York City for The New York Coalition for School Food. I'LL BE PERFORMING AND WILL HAVE JOE DENINZON ON MANDOLIN, ACCOMPANYING ME!!! I am also bringing Jahmane Bright, who is my co-producer for my album, and he would love to meet you. That's my posse. I also understand Jann Klose is bringing his posse as he's performing at this event. Acclaimed-jazz clarinetist Oran Etkin will also be on stage.
Mr. Oran Etkin showing and playing his clarinet for kids! http:www.youtube.com/watch?v=zcmlwSeWko8
Contact for HEALTHY FOOD FOR THOUGHT:
Paula Lizzi at soulcomfort@aol.com
Posted by Anne Leighton at 10:29 PM

Jim McCarty's SITTING ON THE TOP OF TIME 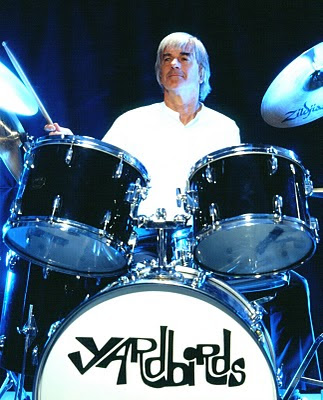 Jim McCarty's SITTING ON THE TOP OF TIME features instruments and a chamber pop influence courtesy of flautist Ron Korb and pianist Donald Quan, guitarist Ray Hickey and bassist George Koller, plus guest guitarists Steve Hackett and Jean-Michel Kajdan (who, in addition to his exhaustive credits, was the Yardbirds guitarist for the 2008 French tour), and pianist Lou Pomanti.

Of course a debate could be made for Jim as one of the bearers of this progressive pop style of music, in addition to co-creating the Yardbirds. This drummer/singer/songwriter also co-founded Renaissance, Illusion and Stairway-- all important orchestral rock and pop bands.

Jim started the album at home, but had limitations in his studio, so he connected with Jason Relf (younger son of the late Keith Relf, who-of course— founded Renaissance with Jim). Jason is a studio wiz and teacher, and came to Jim's home in France to install a “state-of-the art” digital system. “The great thing with the system was that there was no limit to the number of ideas I could record, so I could put every one of them down, without judgment.”

With some basic tracks together, in June 2006, Jim went to Toronto, Canada and recorded in Quan's studio, Q Music. “There seemed to be a good group of session players available, very much like in London in the ‘60s and thanks to Ron, I soon had a good team together: Ron, Donald, Ray, and George.”

“It was a magical day for me, when all of a sudden my ideas from France came to life in a new way, each of the musicians adding their particular influence.” Each time Jim toured the States with the Yardbirds, he would go to Toronto to make more tracks on SITTING ON THE TOP OF TIME.

Online sources: Song Facts' Carl Wiser interviews Jim on his insights of making music through the years and his spirituality. http://www.songfacts.com/blog/interviews/jim_mccarty_of_the_yardbirds/

Music video created by fan of Jim's song, “The Outsider.” Lots of beautiful sites to come into your mind. Enjoy the video. http://www.youtube.com/watch?v=HZ5QrrfRWXQ 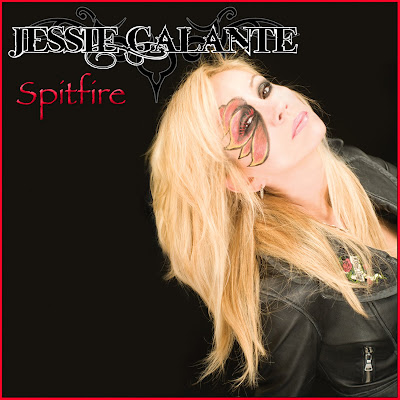 Jessie is a dynamic and gifted singer who I've admired for years. I'm honored to be working with her-we're pals, gals and have a real gung-ho attitude about rock & roll. We're both from Buffalo-Jessie was “the first lady of rock,” and I was the first rock woman on middays in Buffalo radio.

She's a determined singer, and her album, SPITFIRE reflects her energetic and unpredictable personality. It includes a cover of Gladys Knight's “Got to Use My Imagination.”

LET IT ROCK's Dmitry Epstein writes, “ Ms Galante's no slouch when it comes to go flaming… Blame the temper and the love to music on her Sicilian roots, but it's the combustible combination that's hard not to fall for.”

There's a great interview with Jessie in MAXIMUM INK
http://www.maximumink.com/index.php/articles/permalink/jessie_galante

Jessie Galante's powerful, life affirming video “No Fool No More.” What parts of the world are in this video?
http://www.youtube.com/watch?v=VWsF8ru5X_k 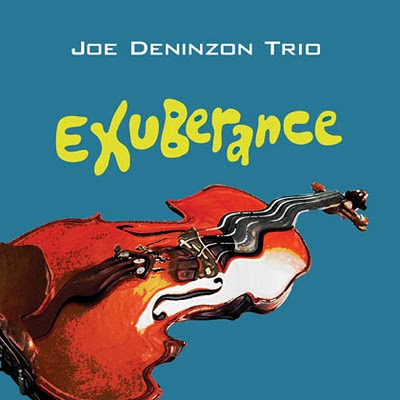 “If the violin has a future in Jazz and Rock, it is with Joe Deninzon.”
-Relix Magazine

Progressive jazz violinist Joe Deninzon, is honored to announce the release of EXUBERANCE. Recorded with bassist Robert Bowen, and guitarist Stephen Benson, EXUBERANCE is the essence of three musicians in a room, playing live with no overdubs or production; a completely raw experience.

The group draws influences from jazz stylists including the gypsy explorations of Django Reinhardt and the hot swing of violinist Stephane Grappelli along with rock and pop standards of the past 40 years including songs by Steely Dan, Alice in Chains, Jimmy Webb and Radiohead. A few choice covers by Radiohead (“The Tourist”), Alice in Chains (“Heaven Beside You”), Steely Dan (“Bodhissatva”) and Fat's Waller's “Jitterbug Waltz” show just how wide the group's range goes.

One of the group's original songs, “Sun Goes Down” (featuring Luba on lead vocals), has been featured in the independent film, “What's Up Scarlet?” and a recent winner in the Jazz category of the Billboard and John Lennon International Songwriting Contests.

The album is also a tribute to Robert Bowen, who was killed when a car struck him as he rode his bike in Manhattan late August. Live, the band performs with bassists who were friends with Robert, plus drummer Luciana Padmore (from Joe's band Stratospheerius). The group has donated some of its earnings and CD sales to Robert's children.

Best known for his work on the 7-string electric violin and lead singing with the rock group Stratospheerius, Joe Deninzon plays acoustic violin in this Trio. Joe has performed as a solo violinist with the New York City Ballet, and on album or in concert with Bruce Springsteen, Sheryl Crow, Jane Monheit, Everclear, Ritchie Blackmore of Deep Purple, Smokey Robinson, and Les Paul. A 10-time BMI Jazz Composer's grant recipient and a winner of the John Lennon Songwriting Contest, his original music has been used on CMT, MTV VH1, Comedy Central, National Geographic, the Travel Channel and the History Channel.

JANN KLOSE ON INVENTING A PERSONAL MUSIC BUSINESS THAT WORKS 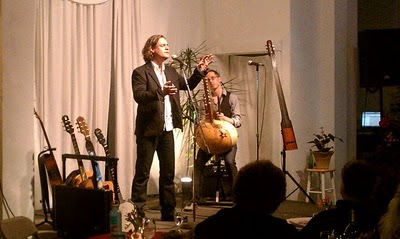 
In an age when most music professionals are seeking to "re-invent" the troubled music industry, Jann Klose has developed a paradigm that works.

In the two years since the 2008 release of Jann's third full-length album, REVERIE, the songwriter has recouped recording costs a bit more than three times over. Beyond that, he has earned the respect of his peers, fans, and critics as a singer, musician, and songwriter. You can hear his work on TV, in movies, online, and via radio worldwide.

Jann's approach to building his career centers on principles of dialogue, cooperation, and commerce. This cooperative attitude includes the fans.

Jann and his team think both inside and outside "the box." They work “traditional” music business avenues, such as contacting the music industry media and venues. He also reaches out to regional and international leads in government, media, corporate, business, educational, and charitable organizations. He follows up with contacts that previously passed on his offerings. Unlike major labels that cease promotions of most releases within three months, his team continues to promote his career, and still campaigns for REVERIE.

He'll reach out to music lovers at conventions like NAMM through his endorsers LR Baggs Pickups and Martin Guitar. These companies have given Jann an enormous amount of support - most notably the opportunity to perform on stage with Rosanne Cash, Marty Stuart, and Roger McGuinn at Martin's 175th Anniversary Concert.

Jann's fans get as involved with his career as they are with his music. Among these fans is Renaissance vocalist Annie Haslam. Along with Renaissance's original keyboardist John Tout, they collaborated with him for a sold out show of the Sellersville Theater, in Pennsylvania. Haslam also invited Jann to open for the group's comeback tour in fall 2009, and he will open for Annie when she again plays Sellersville on December 18 and 19.

REVERIE was funded partly by fan support in a campaign Jann modeled after PBS' fundraising style. He's funding his forthcoming album the same way and calls the method The People Records Project. (http://www.peoplerecordsmusic.com), eschewing the new fan-sourced financing sites like Kickstarter, PledgeMusic, Indiegogo. He proved to be several steps ahead of them! His fan sourcing program includes: for a donation of $40, a fan can get Jann's favorite German recipe, hand-written. A birthday call is $75. Jann and his band will play a private concert in your living room (or any other room you choose, anywhere in the world) for $5000 + travel.

This universal strategy can be applied to all kinds of businesses. It just paid off as an album Jann appears on, HEALTHY FOOD FOR THOUGHT: GOOD ENOUGH TO EAT, was nominated for a Grammy Award for Best Spoken Word Album for Children. Independent record producer Kevin Mackie created the album to help fight childhood obesity. He invited Jann to contribute a song, and also included recordings from Julian Lennon, Moby, Tom Chapin, Sweet Honey in the Rock, Uncle Floyd, and Michael O'Keefe. The CD's Production team developed a personal outreach strategy of awareness to the recording and encouraged music industry peers to listen to the album and consider it's recording qualities.

Jann's business partner is music services person Anne Leighton, publicist for classic rockers including such self-managed acts as The Yardbirds, Grand Funk Railroad, and Jethro Tull and Tull's leader, flautist, and vocalist Ian Anderson. Anderson networked Jann with Saori Jo who opened for Tull in 2008 and 2009. This resulted in Saori Jo and Jann planning to tour Germany in 2011.

Born in Germany, raised in Kenya and South Africa, Jann first came to the States as an exchange student in Cleveland, OH. After finishing his civil service in Germany, he returned to the US to start his career. Jann's music has been featured on MTV's Cribs and the soundtrack to the Paul Sorvino film Dead Broke. He performed in touring companies of Broadway shows such as The Who's Tommy, Jekyll & Hyde, and Jesus Christ Superstar. His three albums and two EPs can be heard around the world, on over 130 FM stations, Sirius XM in the U.S., the BBC in England and Prambors Radio in Indonesia.

Jann is available for interviews on this new means of funding a music career.

CLASSIC ROCK put Bruce Kulick's album, BK3 as one of their top 50 albums of 2010.
http://www.classicrockmagazine.com/news/classic-rocks-top-50-albums-of-2010-so-far-part-one/

I would like to congratulate journalist Will Romano on his progressive rock book, MOUNTAINS COME OUT OF THE SKY; THE ILLUSTRATED HISTORY OF PROG ROCK. He's included some of my artists (Ian Anderson, Martin Barre from Jethro Tull, David Cousins, John Hawken, Oliver Wakeman from the Strawbs. Former clients Tim Bogart from Vanilla Fudge and Dee Palmer, who you remember as David Palmer from Jethro Tull, are also in the book) in it. Publicity is being handled by Aaron Lefkove, marketing and publicity, at alefkove@halleonard.com .
Posted by Anne Leighton at 9:55 PM