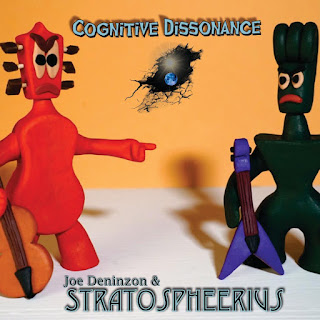 Joe Deninzon & Stratospheerius are releasing “Cognitive Dissonance,” their first song of the year, on January 30th, 2021, with a video to follow in late February. The video is a clay-mation collaboration with Patrick Carmichael, who has subbed on drums for the band through the years.

“Cognitive Dissonance”’s first verse deals with the confusion we go through, when elders and leaders influence us to change our minds with their negative feelings on those we care about. “We are all born innocent, free of prejudice and hatred, but our elders make us carry a heavy burden, which can last our whole lives. Hatred is taught, we are not born with it,” explains Joe. “We all see children that are terrified by friends that are their same ages, because their parents have taught them negative things about other religions, ethnicities, genders, skin colors, political ideologies….” He says prejudicial teachings “can create “cognitive dissonance” in anyone’s mind when they’re told their friends are ‘evil’ because they have different roots.”

The second verse deals with political and ideological intolerance. “There’s rising extremism, and it’s been this way for decades. People are prisoners of fake news, social media echo chamber bubbles, and politicians who reinforce conspiracy theories and retweet them to their followers. The line ‘No one can touch us now’ refers to people hiding behind their screens, spewing the deep-rooted hatred without fear of physical retaliation. Even though I wrote the song a year ago, I think it eerily speaks to recent events.”

“It’s easy to write about our high ideals and our wishes for world peace, but when you have a gun pointed to your head or your business is burning down, it’s a rude awakening about how nasty the world really is. The big collective guitar/electric violin solo at the end represents two sides screaming at each other, full of hatred, fading out screaming, never reaching an understanding or resolving anything.”

Multi-instrumentalist Randy McStine, who has subbed in Stratospheerius on guitar, bass, and drums, has played on a few of the band’s songs: “Soul Food” and “Impostor.” His voice blends with Joe’s, that “we thought it’d be cool to have him sing lead on the second version of ‘Cognitive Dissonance.’”

The group’s influences include Yes, Spock’s Beard, Muse, Frank Zappa, Mahavishnu Orchestra, and King Crimson. Stratospheerius was a winner of the John Lennon International Songwriting Competition the Musicians Atlas Independent Music Awards. They have been featured in Progression, Relix, Downbeat, and Jazziz, among other publications. Their last album on Melodic Revolution Records, “Guilty of Innocence,” has been widely acclaimed by critics and fans. Joe has played violin in orchestras for Bruce Springsteen, the Who, Sheryl Crow, 50 Cent, and Renaissance, for whom he’s their concert master.

I had a childhood friend

Sworn together til the end

Talking about the birds and bees

He asks if I believe in God

And then I tell him what’s my story

Because that’s what his parents told him

All of our lives

We think that we’re so wise

But It cuts you down size

When it’s staring in your eyes

And a blank slate on our souls

Old grudges we are forced to bear

Safely behind our screens

No one can touch us now

All of the lies

We tell to feel so wise

But It cuts you down size

When it’s staring in your eyes

Fran Snyder Pocast: John Hall - Still the One - Rocking on Stage and in ...

House Concert Innovator Fran Snyder a phenomenal interviewer and listener. Great energy between him & Orleans' John Hall as they talk about Joni Mitchell, the Affordable Career Act, and making music. (Yes, John's working on both a new solo album and the band's upcoming album.)