On September 18, 2015, Frontiers Music SRL will release ALL OUR YESTERDAYS, the tenth studio album from Blackmore’s Night.

On September 18, 2015, Frontiers Music SRL will release ALL OUR YESTERDAYS, the tenth studio album from Blackmore’s Night, the world’s number one Renaissance act and one of the most popular folk-rock bands in the world.

ALL OUR YESTERDAYS will be released in the United States on a variety of formats: CD, CD/DVD and Digital versions on September 18 and in LP and Box Set configurations on October 16. Please note these are U.S. release dates.

DETAILS:
* CD/DVD Deluxe edition includes the full album plus a DVD with music videos for "All Our Yesterdays” and “Will O’ The Wisp,” plus an extensive interview with Ritchie Blackmore and Candice Night on the making of the new album.
* 2LP vinyl edition with a gatefold sleeve.
* Box Set Limited Collector’s edition includes CD/DVD deluxe edition, 2LP, tshirt (L size ONLY), poster, lithograph.

Blackmore’s Night vocalist and multi-instrumentalist Candice Night says, “There’s a theme to ALL OUR YESTERDAYS’ chosen songs that focuses on the attitude of living in the present, and looking toward the future, because we are, indeed, enriched by our past. My main theme and inspiration has always been nature and folklore from around the world.”

Candice Night and Ritchie Blackmore’s lives and creative journeys have taken them through different characters and songs from a variety of times in history. That is part of the attitude in the song "Where Are We Going from Here,” about a traveling minstrel’s journey through life and age.

The title track (and also the first single and video), “All Our Yesterdays” echoes the sounds of Candice’s Russian roots, while a new song written by Germany’s George Hesse is an old-style, fiddle-driven instrumental with the Welsh title “Allan yn y Fan” (meaning “Out There”). Ritchie’s heritage includes family from Wales.

The album also includes stunning instrumentals: the acoustic guitar piece, “Queen’s Lament” and the dramatic “The Darker Shade of Black” that spotlights violin and guitar.

Elsewhere on the recording, “Earth Wind and Sky” is a delicate ode to nature. “The Other Side,” a latter-day folk dance joins two jigs that Candice sings: “Coming Home” and the supernatural-themed, “Will o’ the Wisp.”

ALL OUR YESTERDAYS gets further inspiration from Candace and Ritchie’s home town, where they take part in community folk nights during which the neighbors share guitars and songs, and sing melodies that have come from a variety of times in their own history. That’s how they fell in love with songs of various radio formats of years gone by. The album includes the Linda Ronstadt hit “Long Long Time” (penned by Gary White); the Mike Oldfield song, “Moonlight Shadow;” and an inspiring Maypole Dance treatment of Sonny & Cher’s “I Got You Babe.”

Blackmore’s Night is a true musical and spiritual collaboration between vocalist/multi-instrumentalist Candice Night and her husband, legendary guitarist Ritchie Blackmore. The two met in 1989 when Deep Purple challenged Candice’s then radio station to a charity soccer match. In 1993 she sang on Rainbow’s DIFFICULT TO CURE tour. They co-wrote four songs for Rainbow’s STRANGER IN US ALL and in 1997 they formed Blackmore’s Night; they continue to play Faire Festivals all over the world.

Posted by Anne Leighton at 2:08 PM 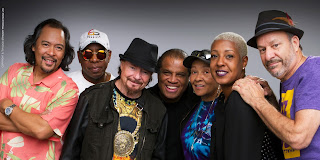 At West Holts Stage (a main stage) at Glastonbury 60,000 fans were in a funky grove listening to The Family Stone that included such classics as “I Want to Take You Higher,” “Everyday People,” “Dance to The Music,” “Family Affair,” and finale “Thank You (Falettinme Be Mice Elf Agin).” Then The Family Stone climbed aboard the Mothership with George Clinton, and supported him on his hits like “One Nation Under A Groove,” a moment France’s website Funk U described as “unprecedented.”

Praise for The Family Stone’s funky two hours at Glastonbury came from the media: THE TELEGRAPH’S Bernadette McNulty writes, “The Family Stone…sound fantastic.” NME praised the group for “getting the crowd dancing to hits including ‘Everyday People’ and ‘Dance To The Music’.” A fan tweeted, “The ‘auld’ dudes are dishing up a masterclass!“

The Family Stone play a few more European festivals: Including The Glasgow Jazz Festival, Worthing Pier, and France’s renown Jazz a’ Vienne. Then the group jets to LAX for Independence Day celebrations: July 3 at Spotlight 29 Showroom in Coachella, and the 4th in Las Cruces, New Mexico.

The tour continues as The Family Stone headlines Hippiefest 2015 from July 9 in Tucson, AZ through October 4 in Waukegan, IL.

Other acts on the Hippiefest 2015 tour are: Rick Derringer, Mitch Ryder and the Detroit Wheels, Badfinger w/ Joey Molland. Some dates will include Felix Cavaliere’s New Rascals, the Lovin’ Spoonful, and Rare Earth’s Peter Rivera.

In addition to taking credit as the first-inter-racial band, with male and female instrumentalists in Rock & Roll history, The Family Stone features a new lead singer—Phunne (pronounced “Fun”), daughter of trumpet player Cynthia Robinson and Sly Stone (founder of Sly and The Family Stone).

Cynthia, along with other founding members saxophonist Jerry Martini and drummer Greg Errico are leading the energetic group that has received major acclaim in rock music history. The group was inducted in the Rock & Roll Hall of Fame in 1993., were 2001 R&B Pioneer Award Winners, and inducted into the Vocal Group Hall of Fame in 2007.

In addition to playing Woodstock in 1969 and being one of the biggest bands in America in the late ‘60s through the ‘mid-‘70s, Sly and the Family Stone pioneered topical and social issues in the 1960s when segregation filled the United States with angst, violence, and headlines. Sly and the Family Stone sang against racism, discrimination and self-hate.