Posted by Anne Leighton at 9:16 PM

Renaissance have secured a distribution deal with Red River Entertainment, which now allows their new music to be heard worldwide.  The new album is called, SYMPHONY OF LIGHT and contains the songs of its 2012 release, GRANDINE IL VENTO, plus three bonus tracks: "Renaissance Man," "Immortal Beloved" and "Tonight.”

“Symphony of Light” is the title track-about and dedicated to Leonardo da Vinci.  Also featured is "Renaissance Man," written by leadsinger Annie Haslam and keyboardist Rave Tesar in honor of the late Michael Dunford.  Michael joined Renaissance in 1970; in January 1971 Annie joined the band.  They continued touring and recording until 1987. In 2009 the band reunited, spearheaded by Annie and Michael for their 40th Anniversary tour, they continued to tour and write new songs.

SYMPHONY OF LIGHT is now regarded as a true testament to the unforgettable melodies and love that Michael Dunford infused into his work. Michael died prematurely in late 2012 after GRANDINE was completed. The album starts off with powerful lyrics by Annie Haslam in the song "Symphony of Light" followed by "Waterfall," a song written about the rainforests in Brazil.  All the songs bathe the listener in flavors from far off countries, with lush orchestral arrangements and unusual lyrical content, with guest performances from Ian Anderson (Jethro Tull) and John Wetton (Asia).

SYMPHONY OF LIGHT's album cover was designed and painted by Annie Haslam, who has a flourishing career as an artist known for her unique, signature style.  Annie calls herself an “Intuitive Visionary Painter,” "I channel other dimensions, planes of existence, deep into space. I can tune into people, animals, situations, places, tangible and intangible, all from a simple thought and intention."

Annie has donated paintings to animal groups that include The Farm Sanctuary and the Humane Society of the United States for their fundraising auctions.  She paints musical instruments and has painted acoustic guitars for C.F. Martin Guitars (one of her guitars hangs in their museum) and electric violins manufactured by Mark Wood. Her work was on display at The Florence Biennale in Florence, ITALY in 2005. Fans have commented that looking at Annie's paintings is like looking at her music, and she displays her work at all her concerts for the fans to enjoy.

Nicholas J. Sands, director of Sands & Company Fine Art in New York City, heralded Annie's paintings as “magical, enigmatic and wondrous for their ability to take us to a far-away place… of fluid forms that are at once alien and familiar, primordial yet recognizable, which dance in an endless array of colors that are as rich and intense as molten lava.” 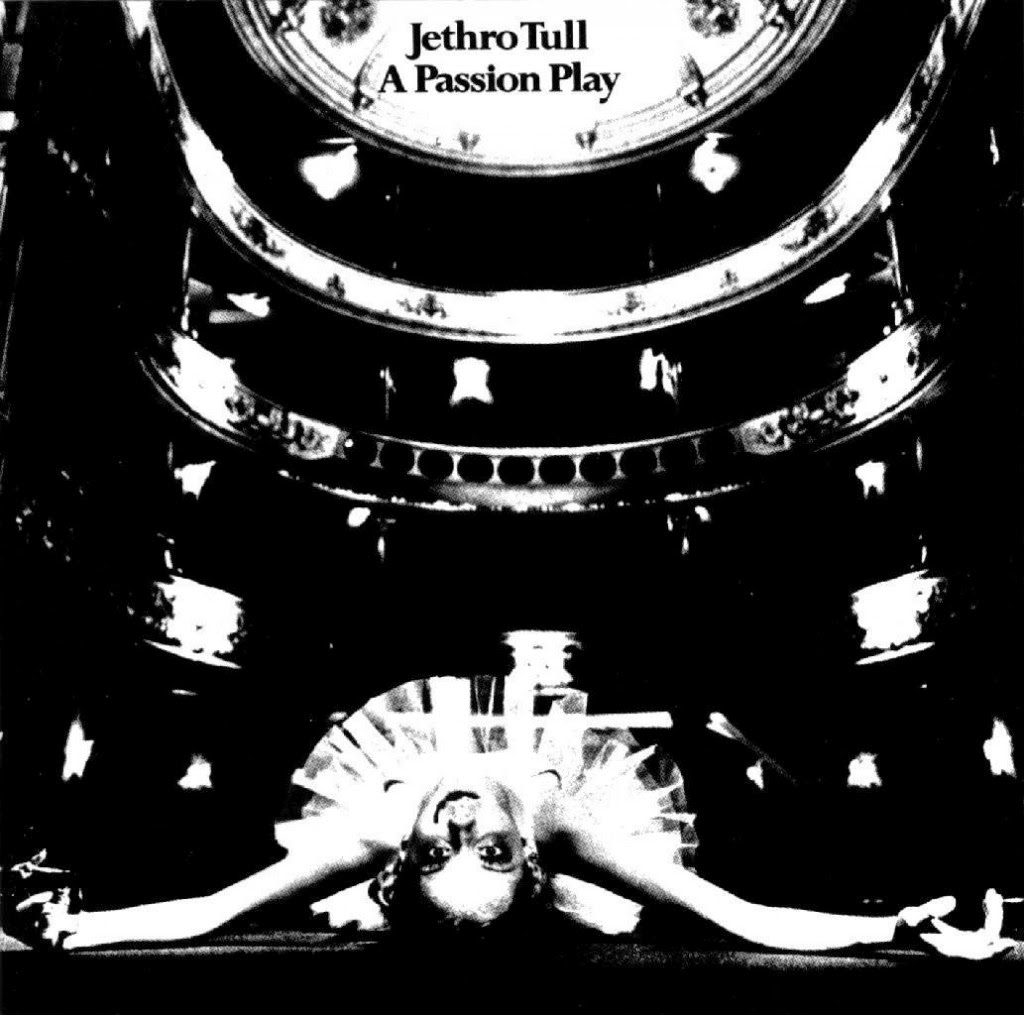 In 1972 Jethro Tull were riding high on the crest of a popularity wave, they sold out huge arenas on the back of their critically acclaimed fifth album Thick As A Brick. The question was:  “How do you follow a concept album comprising a single 44-minute piece of music?” The answer was: “With a double album of separate songs of course.”

For the first time in their five year career, Tull went into the studio with an unchanged line-up. Founder member and undisputed leader Ian Anderson was still writing songs on flute, acoustic guitar and now saxophone, and he was again joined by guitarist Martin Barre, bassist Jeffrey Hammond-Hammond, drummer Barriemore Barlow and keyboard player John Evans. But which studio to use?

The first criterion was that it had to be abroad. The second criterion was that the studio of choice had to have a good reputation.  The 18th century Château d'Hérouville near Paris had previously been used by Elton John to record Honky Château and by Pink Floyd for Obscured By Clouds. It contained living accommodation as well as studio facilities, and so seemed the ideal choice. What could possibly go wrong?

The choice was a disaster. First up, there were technical problems with the studio itself. Then there was the accommodation... the band all slept in a dormitory, it was very basic which might have been tolerable, had they been the sole occupants of the rooms. Unfortunately, they had unwelcome company, of a bed-bug variety. And then to make matters infinitely worse everybody got food poisoning from the in-house catering.

Unsurprisingly the band decided to go home and the decision was made to ditch the hour or so's worth of music recorded in France. They decided to start from scratch and write a whole new album, instead of trying to somehow regenerate everybody's interest and commitment to something that had already struggled.

And so to A PASSION PLAY, an album that evolved into a 45-minute piece of quasi-prog rock, with complex time-signatures, complex lyrics and, well, complex everything, really. With a mere nine days left in the studio before the next tour, the pressure was on to produce something quickly. The concept explored the notion that choices might still be faced in the afterlife. It recognizes that age-old conflict between good and bad, God and the Devil.

This beautifully packaged 2CD/2DVD case-bound book expanded edition of A PASSION PLAY includes the original album and earlier Château d'Hérouville Sessions both of which have been mixed to 5.1 surround sound and new stereo mixes by Steven Wilson.

For more information about A PASSION PLAY, please contact Jason Elzy at jason.elzy@rhino.com or 818-238-6220.

DVD 1 (Audio & Video)
Contains:
ο A Passion Play mixed to 5.1 DTS and AC3 Dolby Digital surround sound and PCM 96/24 PCM stereo.
ο A flat transfer from the original master at PCM 96/24 stereo
ο Video clips of 'The Story Of The Hare Who Lost His Spectacles' an intro and outro film used in the Passion Play tour of 1973.

*An extensive article by Martin Webb on the preparation and recording of the album and the Château sessions that preceded it.
*Steven Wilson's thoughts on mixing the recordings.
*Memories of the cover shoot and Hare filming by dancer Jane Eve (Colthorpe)
*The Rev'd Godfrey Pilchard's recollections.
*1973 tour history
*Recollections of touring and PA systems by sound man Chris Amson.

(and wins other high praise from critics and industry)


A who's who of the international prog rock community has been responding to Druckfarben’s sophomore album, Second Sound, with acclaim and accolades. A&R man Michael Caplan (who discovered Echolyn, Matisyahu, Los Lonely Boys and Keb’ Mo’) says it’s "the best album of the year so far!"

Prog Rock journal Expose's editor Peter Thelen writes "The entire band is a pretty impressive unit... This will definite be of interest to all fans of classic prog, and particularly bands like Gentle Giant, Kansas, vintage Saga and CTTE (Close To the Edge) era Yes."

Pop Culture Classic's Paul Freeman calls Second Sound an "impressive album." Powerline writes that Druckfarben is "truly a band to watch." Michelle Wilson of Ink19 says “If you're a prog rock fan, this one is not to be missed.” The Phantom Tollbooth compares Druckfarben to "Yes, Rush, Gentle Giant and Kansas, all mixed together with some Celtic and residual metal flavors on top." Bass Musician Magazine states, “Though the modern Prog band is usually a by-musicians-for-musicians band, Druckfarben is a fantastic exception to this rule and is not only listenable, but also enjoyable to just about anyone.”

Tyrone Buccione of T-Mak World writes: “What a great album! I give this bad boy 5/5 stars for just being a bold and powerful progressive rock album with track crossfading and killer tones and another 5/5 for having such amazing written parts and melodies. That’s right, 10/5 stars! I thought Druckfarben’s Second Sound really captured the true essence of rock and roll, and I know it will be well received in the rock community.”

In German, the word Druckfarben means "coloured printing ink." As teenagers growing up in suburban Ontario, Ed and Troy stumbled upon those letters stenciled on mysterious black barrels in their rehearsal space. Although at the time they had no idea what "Druckfarben" meant, they decided it would make a great band name. Many years later, as their dream progressive rock band came together, they knew what to call it.

All five members grew up with a shared love of classic progressive rock. They played their first show in 2008, released their self-titled debut in 2011, and put out a live DVD (Artifact) in 2013. Fans include Kim Mitchell, Nick D’Virgilio (Spock’s Beard), and Maurizio Guarini of Italy's Goblin, plus producers Terry Brown (Rush) and David Bendeth (Bruce Hornsby, Paramore).
Songs from Second Sound cited by the media include "Dandelion," "In Disbelief," and the 19-minute epic title track that closes the album.

Posted by Anne Leighton at 8:50 PM