It’s Been 40 Years Since The Kings Closed the Show at Heatwave & To Celebrate,

The Kings: Live at Heatwave is Set to Add to The Kings’ Already 7.3+ Million Streams Across Spotify & YouTube

August 2020 marks not one, not two, but three crown-worthy milestones in the land of Canada’s long-iconic band, The Kings:

1. 40 years ago this month, they released their Bob Ezrin produced debut album, The Kings Are Here on US major label Elektra Records.

2. That same month, their smash hit single “This Beat Goes On / Switchin’ to Glide” first entered the Billboard Hot 100.

It’s that third one — their midnight appearance at the now-storied Toronto-area festival — produced by John Brower--that’s inspired the exclusive release of The Kings: Live at Heatwave, a 30-minute concert movie available on YouTube.

“The Kings and Teenage Head were the only bands that gave permission to be filmed,” recalls founding member Dave Diamond. “As Teenage Head’s audio has disappeared, this is the only surviving, authentic, and original sync footage from that day.”

“We’d worked hard and were ready for a gig like this," says drummer Max Styles.

The Heatwave Festival at Mosport Park turned heads from the onset between its high profile roster, ultimate crowd size, and that it sat at a cultural turning point in the evolution of new wave music. (It was also marred with some scandal, but… Aren’t they all?)

“For some reason, they didn’t film our whole 55 minute set,” Diamond muses. “But there’s almost half an hour here, and we’re very proud of it.”

Speaking of restored and remastered footage, The Kings’ video for “This Beat Goes On / Switchin’ to Glide” holds more than 4.1+ Million views on YouTube for good reason; it’s a digital masterpiece featuring more than 40 sources of live recordings that took upwards of 140 hours to edit together.

The single continues to hold four decades of knockout radio success, has stacked around ~ 2 Million streams on Spotify and counting, was named by the Toronto Star as the “#1 almost official song of Toronto,” and one of the “Top 100 U.S. Radio Programmers Picks of the Decade” by Album Network Magazine.

Also on the required syllabus in study of The Kings is their documentary, The Kings: Anatomy Of A One-Hit Wonder. “This is the film we made about our biggest hit,” the band says. “We felt it was something people who like ‘behind the scenes’ music films would like, and there is a lot of never heard before stories told in it about the writing, recording and performing of our best-known work.”

The documentary delves into the history of the band, the amount of diligent effort put in before getting their big break, and features the original lineup of Max Styles, Sonny Keyes, David Diamond and Mister Zero sharing personal memories with their trademark humor and honesty. “This documentary was over three years in the making. This is our story, told by us.”

That story is of a hard-working band hailing from Vancouver, BC and Oakville, ON that appeared on Dick Clark’s American Bandstand, was nominated for a JUNO Award, named ‘Most Promising Group’ by Cashbox Magazine, hit Platinum-selling status, and has released five studio albums, two live albums, a live DVD, an anthology, a documentary, and numerous hit singles — including “another rocking two-fer,” “Circle of Friends / Man That I Am.”  The 2018 single was somewhat like arriving full circle; it was mixed in Nashville by industry legend Bob Ezrin (Pink Floyd, Alice Cooper, KISS), who also helmed the same role on their 1980’s debut, The Kings Are Here, and sophomore follow-up, Amazon Beach.

“We were originally known as WhistleKing,” Zero recalls. “We rehearsed, did club gigs, and wrote lots of songs for more than three years before we went into Nimbus 9 Studio in Toronto to record our first album.

“While we were there recording, Bob dropped by to visit and liked what he heard,” Diamond continues. “He agreed to mix the tracks we had done, but soon discovered that the whole thing needed to be re-done. He approached Elektra Records in Los Angeles with our tapes, and we were then signed to a worldwide deal.”

The Kings have continued to rock fans around the world through the release of archived footage and current releases and vlogs; their YouTube channel has a total stream stack of more than 4.5+ million.

This year, February 2020 saw the unveiling of The Lost Tapes of a Seventies Bar Band, a 17-track audio LP featuring live recordings from the Flamingo Lounge and an instalment of what has become The Kings’ Live Trilogy — including audio release Party Live in ’85 and DVD release No Covers: Live at O’Tooles Roadhouse.

And now August 2020 both celebrates and continues to cement the band’s 40 years of Canadian music legacy status with the release of The Kings: Live at Heatwave on their YouTube channel.

In All-Star Line-up of Women Saluting Women To Celebrate 100 Years of Women’s Constitutional Right to Vote.

On August 26th, Phoebe and a group of brilliant actresses including Obie winner Crystal Field and Lissa Morra reenact highpoints in women’s battle for equality and elective enfranchisement.

On Wednesday, August 26th, WBAI Radio 99.5FM NYC (wbai.org) will broadcast a day devoted to the history of the Women’s Suffrage Movement featuring contemporary feminist icons.  The cast will re-enact highlights from 100 years of the campaign for equality.

Transdisciplinary artist and renowned feminist Phoebe Legere will play the part of Chairwoman at the historic first women’s rights convention: the Seneca Falls Convention of 1848.

Legere’s interpretation on piano, guitar and accordion, and vocals is a formidable anthem for our time. Legere’s powerhouse interpretation of “GLORY” celebrates the past achievements of women fighting for the freedom to vote, while heralding the need to continue the battle for true equality.

This song, with words by L. May Wheeler sung to the music of “John Brown,” was first performed by Susan B. Anthony and a chorus of women on July 4, 1876 at the Women’s Centennial Celebration of American Independence held at the First Unitarian Church in Philadelphia.

After singing the song, Anthony read the Women’s Declaration of Rights to a cheering crowd.

“Our hearts have felt the glory of the coming of the time,

When Law and Love shall make our land sublime,

When every mountain hill and rock with freedom’s light will shine,

And truth goes marching on.”

Legere says, “The use of ‘John Brown’ as the melody of this song amplifies the strong ties between the Abolitionist Movement and Women’s Suffrage.”

The WBAI program will be broadcast on  August 26th, Wednesday, from 11 am – 5 pm EST on Fran Luck’s “The Joy of Resistance, Multicultural Feminist Radio”,  99.5 FM and streaming live at http://wbai.org

The show will be presented again on August 27th at 7 pm by the Theater for the New City. Watch at Theaterforthenewcity.net.

Phoebe Legere is a pioneer female composer and multi-instrumentalist and a well-known activist and community leader championing women’s causes.

Her work as a playwright has chronicled many women’s issues.  In her musical, “Hello, Mrs. President,” Legere’s book presented the first woman of color to become president of the United States. Legere’s play, starring Laverne Baker debuted at Theater for The New City in 1992 and 2004 playing to sold out crowds.

Phoebe Legere’s “Speed Queen,” presented at Dixon Place in 2018 was based on the Life of Joe Carstairs, the World Champion Speedboat Racer and lesbian action hero.

As a visual artist Legere has created cutting-edge paintings and installations celebrating the beauty and fecundity of the female body. Legere’s art transgresses normative sexuality and gender identity.

Phoebe will make a download of her “GLORY” available at no charge to those who visit her website at www.phoebelegere.com

PHOEBE LEGERE (Abenaki) is the President of the Foundation for New American Art a nonprofit whose mission is to bring free art and music lessons to the children of low-income communities.  She is a composer, playwright, poet, painter and multi-disciplinary performance artist. Legere has received numerous awards including NYSCA, a Pulitzer nomination and a recent YADDO Fellowship. Legere is the Conductor and Music Director of the Lower East Side Children’s Chorus. She is a lecturer at NYU Gallatin School. Vassar graduate and Juilliard-trained composer. Phoebe Legere has collaborated with some of the most creative personalities of modern times: David Bowie, Joni Mitchell, Steve Martin, Billy Joel, Allen Ginsberg, and Crystal Field. Her epic poem “The Waterclown” about water issues and water rights can be heard in the current issue of the Abenaki anthology Dawnland Voices. Legere’s new play will open at TNC in 2021. Her native name is “Songbundle.” 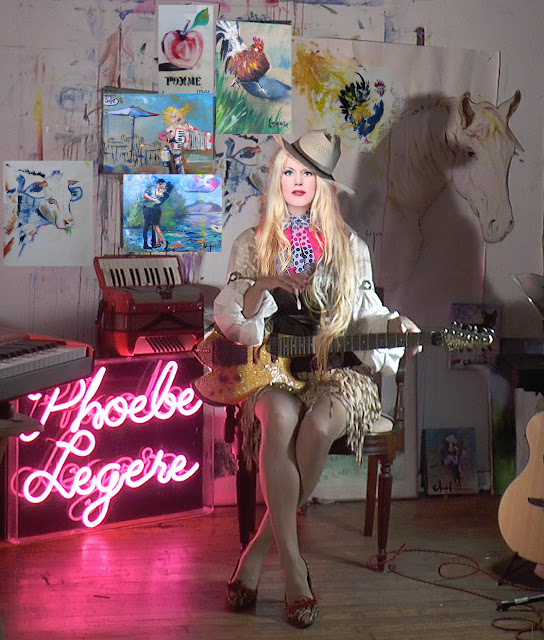 Wake Up by Mandoki Soulmates  Male-fronted version.  Powerful, funky, reconnecting with early rebellious roots.
Note: we also have a version that starts with a female.
Torch  by Mandoki Soulmates a slow and gentle song about idealism and passing our fight on to the next generation. Vocals seem like Peter Gabriel.  Bruce Hornsby influence. Passing on the Torch. Be strong, be brave. Leslie Mandoki says,
" We must stand up for a peaceful, free world and we have to pass on the „The Torch“ to the next generation!!!"

Old Rebels by Mandoki Soulmates lead vocalists have rough voices, like Smokie and Bret Michaels, chime-y keyboards and bongo, Hammond B3, and Udu. Leslie says, :“The explosion of military spending on the scale of the cold war shows a catastrophically wrongheaded development, and we need to be much, much louder against racism!”'

#WeSayThankYou  Thoughtful Piano song about the pandemic virus, paying tribute to the frontline workers, first responders, the doctors, nurses, grocery workers, to anyone who took care of our daily needs and kept the world turning for all of us. Pretty flute parts. Ian stands up to the speculators in the lyrics.

Living In the Gap by Mandoki Soulmates Tower of Power, Blood, Sweat & Tears and Chicago-ish, horns and Quincy Jones style electric Moog bass. A song about how to bridge over the division with music as the greatest unifier, “we need a revenge of analog, we're living in the great divide.” It's a plea for communication and against disunion through the destructive nature of our echo chambers and filter bubbles. Incredible Hammond B3 solo by Cory Henry, bass solo by Richard Bona, guitar solo by Al Di Meola and Saxophone solo by Supertramp´s John Helliwell.

Young Rebels by Mandoki Soulmates Letters to the new kids, 1970s influence, jazz and rock, an old song with a new beat--the young rebels are angry, and don't know how to deal with it.  “Are we old rebels with a new dream, or are we young rebels with an old dream.”
Posted by Anne Leighton at 12:02 AM