He’s a two-time BLUEGRASS ARTIST OF THE YEAR East Coast Music Award winner, and has played with great folk acts including The Band.

Phoebe and Ray connected because a family member Léo-Paul Léger, from Moncton, N.B., President of the Famille Legere, googled “Legere.” to see if he could locate any long-lost Legeres displaced during The 1700s’ Great Acadian Diaspora. Léo-Paul found www.phoebelegere.com and invited Phoebe to the Congrès Mondial Acadien.

She put her accordion on her back, hopped on a Greyhound Bus, and sang a song at the reunion, “After about 8 bars, four handsome Legere cousins jumped up and started playing the spoons with me! Everybody was clapping and cheering! It was the greatest party of all time!”

Léo-Paul told Phoebe, she had a Canadian cousin named Ray, who was “the best fiddler in Nova Scotia.” “Leo showed me Ray’s photo. ‘Goodness gracious!’ I said. ‘Ray looks just like daddy when he was young’ So I googled Ray and found  www.raylegere.com. Ray is just so nice and brilliantly talented as you can hear for yourself when you listen to our EP ACADIAN MOON!”

Congrés 2014 was in Edmundston, N.B., “I wrote a song for our family. It’s called ‘L’Acadie.’ I played the song at the reunion.”  Then Phoebe sent the song to a friend in France, who sent it to a radio programmer in Germany, “He loved it, and he sent it to a radio lady in Canada, and next thing you know she called me up and said, ‘This is so great, won’t you and Ray please do some more songs?!’”
“I called up Ray, ‘May I drive up to Memramcook and play with your band? We’ll record a little album that will be down-to-earth and real, with the flavor of an old-time kitchen party!’”
Well, how could he say no to a cousin!
Songs on the ACADIAN MOON EP are in a mixture of French and English: “Cajun Moon,” and French: “L’Acadie,” “Bel Bel Bel,” and in English: “OK Cupid.”

Please watch “OK CUPID” the first video from Legere at bit.ly/1BUvQ0i . The video is a selfie shot on Phoebe's new Iphone 6.  There were also dance scenes from Phoebe's award winning original musical play Shakespeare and Elizabeth - choreographed by Catherine Turocy.

PHOEBE LEGERE is a songwriter and resident of Maine, and of Acadian and Abenaki (First Nations) descent. She sings, and plays piano, accordion, cello, Native American flute, organ, buffalo drum, synthesizer, guitar and cavaquinjo. She has created the Shamancycle, a giant, 15-person, ride-able Eagle sculpture-vehicle, running on alternative energy. Legere will be performing on the solar stage of the Shamancycle at the San Francisco Makers Fair this May 16th and 17th. At age 16, Phoebe made her Carnegie Hall debut and was signed to Epic Records. Her original song “Marilyn Monroe” was a hit on college radio in 1990, and her accordion song “Amazing Love” was in the Top 40 on Adult Contemporary in 1997. She starred in cult films including Mondo New York and Toxic Avenger 2 and 3. She opened for David Bowie, and was nominated for the Pulitzer Prize in music in 2000. Phoebe has released 15 CDs of original music, and has appeared on National Public Radio, CBS Sunday Morning, PBS City Arts, and Charlie Rose. She has sung at Carnegie Hall, Lincoln Center and at the Congres Mondial Acadien. Recently Phoebe appeared on HBO, singing her original song about the environment, “Hip Hop Frog” (now available on iTunes).

Based in New Brunswick, Canada RAY LEGERE is the 2003 and 1996 ECMA (East Coast Music Award) Winner for "Bluegrass Artist Of The Year.” One of Canada’s premiere fiddle/mandolin players, the Amherst, Nova Scotia native is a five-time winner of the Eastern Division Bluegrass Awards for both Mandolin and Fiddle, plus the Canadian Bluegrass Awards, Woodstock, Ontario’s Open Mandolin Championship, and the Old Time Fiddle Championship in Sackville, New Brunswick. He has shared the stage or played on recordings by many favorites including David Grisman, Sam Bush, Tony Rice, Jerry Douglas, The Band, Tony Trischka, Doc Watson, Bela Fleck. Ray has recorded on hundreds of sessions, TV SHOWS, and has five solo albums to his credit.

Posted by Anne Leighton at 8:20 PM

It is with great sadness that we report the passing away of the great Daevid Allen, for many years the leading light in the anarchic collective Gong. Daevid lost his long battle with cancer, and the world is a little less sunlit as a result.

Daevid Allen was the kind of mercurial, inspiring individual whose free-thinking nature positively touched the lives of all who came into his orbit. When the Australian-born Allen first arrived in England in late 1960, he ended up as a lodger in the home of Robert Wyatt’s parents; the first Beatnik to be seen in the Kent countryside. Allen brought a glimpse of a different world and way of living to Wyatt and his friends, and later, as a founder-member of British psychedelic pioneers Soft Machine, added his unique vision to British rock music at the time.

It is as a founder-member of the sprawling collective Gong that Allen will be most closely associated; born out of the Paris Spring Commune of 1968, their debut album Camembert Electrique was memorably released in the UK in 1974 on the nascent Virgin Records label for the price of a vinyl single. Gong were never blessed with a stable line-up; Allen left the band in the mid-seventies, but reformed Gong in the early nineties. The latest Gong album – I See You – was released late in 2014, and was greeted with universally glowing reviews, a brilliant restatement of Allen and the band’s enduring musical and lyrical values.

Although Daevid Allen’s death at the age of seventy-seven is a sad loss, his lasting legacy – an unapologetic desire to live, explore, entertain and inform through his remarkable body of work, outside of the world of the everyday – will live on.

This is a February 27 video of Daevid performing a piece from Khalil Gibran's The Prophet in Bryon Bay, Australia where poets and artists gathered to help celebrate his life and work.   daevid allen - poet first and last - Pizza Paradiso - 27 Feb 2015 from Planet Gong on Vimeo.

"For what is it to die but to stand naked in the wind and to melt into the sun?
And what is it to cease breathing but to free the breath from its restless tides, that it may rise and expand and seek God unencumbered?
Only when you drink from the river of silence shall you indeed sing.
And when you have reached the mountaintop, then you shall begin to climb.
And when the earth shall claim your limbs, then shall you truly dance."

Posted by Anne Leighton at 2:52 PM 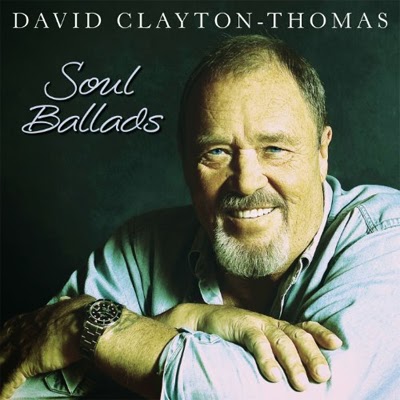 available in the U.S. on Airline Records after its initial release in Canada (where the singer resides), consists of 10 seminal soul ballads, every one of them expertly interpreted by Clayton-Thomas. If you didn’t know better, you might think these timeless anthems were created specifically for David to wrap his warm, expressive pipes around.

“The keyboard player for Blood, Sweat & Tears for many years during the ‘80s was Lou Pomanti. And he’d been bugging me for the longest time to do an album of all those great songs that we used to do together back in the old bar days, when we played five shows a night on what they called the Yonge Street strip here in Toronto,” says David, who was in the midst of completing his autobiography and about to receive his star on Canada’s Walk of Fame when he decided to make this album. “I didn’t have much new original material. But I called Lou up and I said, ‘Lou, I think the time has come. Let’s do it!’”

In addition to playing piano throughout, Pomanti produced the set in Toronto. “We didn’t go looking for obscure songs that nobody had ever done before. We went looking for those great iconic tunes,” Clayton-Thomas continues. “We decided to do them with a full orchestra: 15 strings, eight horns, rhythm, percussion, the whole bit. And of course, utilizing modern recording studios.”

Assembling the set list was a labor of love. “They’re just basically songs I’ve always wanted to sing,” David says. “A very challenging album too, because if you’re going to go and put vocal performances up against Otis Redding and Sam Cooke and Ray Charles, you’d better be on your game, you know? Pretty tough competition. But we just set out to basically pay tribute to all those artists and those great songs.”

The set opens with David’s distinctive rendition of Gladys Knight & the Pips’ “Midnight Train To Georgia.” We stuck very close to a lot of the arrangements, but I didn’t want to just clone the arrangements and make it like a cover album,” he says. “We wanted to bring our own thing to it. So since I don’t have the Pips, and I’m a huge Gladys Knight fan--I think she’s one of the greatest singers ever--we decided to do the background parts with the horn section instead.”

Few 1960s soul anthems pack a more powerful punch than Sam Cooke’s hopeful “A Change Is Gonna Come,” its message resonating strongly with David. “I idolize Sam Cooke, and I had sung ‘A Change Is Gonna Come’ a thousand times in the old days,” he says. “So it just fell right back into place very, very easily.” Curtis Mayfield and the Impressions’ similarly inspirational “People Get Ready” receives a welcome revival on the set as well.

David underscores his love for Otis Redding by revisiting two of his Stax/Volt classics: the tender “I’ve Been Loving You Too Long” (which Otis wrote with Chicago soul great Jerry Butler) and Redding’s contemplative posthumous smash, “(Sittin’ On) The Dock Of The Bay.” “Otis Redding was one of my idols, along with Bobby ‘Blue’ Bland and Ray Charles,” he says. Roly Platt’s harmonica winds plaintively through Clayton-Thomas’ remake of “Dock Of The Bay.” “That’s because I can’t whistle!” David laughs.

That enduring allegiance to Brother Ray’s catalog is immediately apparent on lavishly arranged treatments of Charles’ versions of “Ruby” and “You Don’t Know Me.” David does a splendid job on Harold Melvin & the Blue Notes’ lush “If You Don’t Know Me By Now” (the original featured Teddy Pendergrass, another timeless soul voice), and really brings the heat on an intense rendition of Sam & Dave’s uplifting Stax classic “When Something Is Wrong With My Baby,” complete with a punchy horn section.

Transforming Bobby Hebb’s catchy “Sunny” into an after-hours torch number works like a charm. “The song I’m really intrigued with on the album that I like the most and has been getting the most airplay up here in Canada is ‘Sunny,’” he reports. “And that’s a song we did totally different. We did it as a slow ballad, as opposed to the up-tempo version that I had heard.”

Throughout Soul Ballads, Clayton-Thomas’ longtime love affair with each song shines through bright and bold. “I’m a fan of every single artist on that album,” he says. “That’s why I chose the songs. And those are all artists that basically informed my style when I was growing up. One week I’d sound like Ray Charles, the next week I’d try to sound like Sam Cooke!”

Here Clayton-Thomas sounds like no one but himself—the same mighty vocalist whose unforgettable front work on Blood, Sweat & Tears’ “You’ve Made Me So Very Happy,” “And When I Die,” and his self-penned “Spinning Wheel” made the expansive group a full-fledged 1969 juggernaut.

Soul Ballads and David Clayton-Thomas: what a perfect combination!