Got My Eye On You, Santa: Jody Quine & the Big Mr. C  (Optimistic Kitty)

“Got My Eye on You, Santa” was created in the magical workshops of Jody, Mr. C (aka Dan Berggren, who worked in American Forces Radio in the late 1960s). The song GOT MY EYE ON YOU, SANTA was written by Anne Leighton, music director/songwriter Roberta Piket, and songwriter Priscilla Harriett. The song’s message transcends all barriers, “Santa, I love you, and I’ve got magical presence and presents for you, created in MY workshop.” “Santa” appears on the compilation “Let's Have a Rockin Christmas Volume 2” by Bongo Boy Records.
Got my Eye On You Santa: ©Leighton/Hairriett/Piket

Ring Out These Bells (Ring Out, Solstice Bells): Ian Anderson & the Carducci Quartet (The End/BMG)

Posted by Anne Leighton at 2:00 AM

We need a little kindness, and music brings it.

Free flowing, jazz-influenced, slow.  Allan's synthaxe and a celestial tenor play slow and enchanting:  "there was a time."
The lyrics are about unfinished business—words never said to a love.


TOO GONE, TOO YOUNG by Hank Wedel

Hank wrote "Listen" for Christy Moore, and lives in County Cork. TOO GONE, TOO YOUNG is about a late, great friend who “always had the best boots, he really knew his leather.”  hook: “Living in the land of love.” Tempo will remind you of John Stewart’s “GOLD.”

PARALLEL REALITY  Joe Deninzon & Stratospheerius About parenting, and missing his son while he's on the road. Like a faster and heavier “High Fly” (John Miles hit). Bad ass drums. It's about how tour life is a fantasy world; a parallel existence that is fleeting. Hence the line "a fleeting kiss is all this is."   (P.S. Yes, that is Joe's son Max Deninzon that did the art work for the album!)

BEHIND THE CURTAIN  Joe Deninzon Stratospheerius

Joe is asking for an honest world, and not getting answers from public figures, corporations, politicians!  Electric violin-fueled progressive hard rock! A song that talks about the masks we all wear in public. Conspiracies! The song uses lots of “Wizard Oz” keywords: “Pay No Attention to the Man Behind The Curtain.” “Click your heels 3 times.” Similar tempo to Black Sabbath’s PARANOID.

Imagine if all the women agreed to dialogue with one another as opposed to about one another. Keyword: "I will stay with you... I will keep you company... that's what sisters do."  A fan posts, "I used to think Ani DiFranco or Tori Amos wrote this song..."

Both Gary and Jann sing on this acoustic “zombies on cell-phones that short-circuit meaningful dialogue” song. Saxophone included. “J-sweet” is a technical term related to hacking using Java. P.S. How many years have we been asking our friends in the same room to talk to us, not their cellphones?

Rebuilding self-esteem through kindness.  jangly guitar.  TOUCH OF KINDNESS was number one in Belgium! 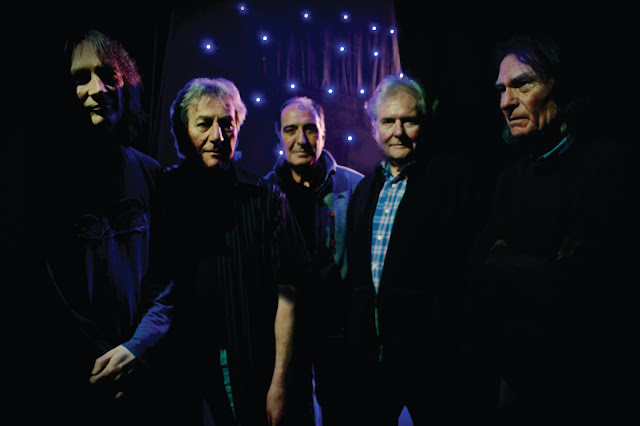 With five decades of colorful history behind them, Strawbs evolved from 1960s British Folk Movement roots to a powerful and enduring force in progressive rock music. Led by the charismatic David Cousins, who has been called the most talented Dylan-influenced songwriter to come out of England, Strawbs dynamic performances, marked by impassioned vocals, tight harmonies, and precise instrumentation are exciting, lush and timeless.

With Cousins at the forefront (vocals, guitar, dulcimer and banjo), Chas Cronk on bass, Dave Lambert (lead guitar and vocals), and Tony Fernandez on drums, today’s Strawbs look very similar to those who brought us some of our favorite classic rock albums, including the iconic "Hero & Heroine,” ranked by Rolling Stone Magazine in 2015 as one of the top 50 progressive rock albums of all time).   New to this veteran Strawbs line-up (a line-up that has through the band’s existence included music legends Sandy Denny, Rick Wakeman and Blue Weaver), is Dave Bainbridge, a keyboard virtuoso who has mesmerized audiences across Europe and North America while performing with his Celtic folk/rock band Iona.

Strawbs return to the USA  with  “Chapter & Verse,” a very special tour that will include a live performance of the extraordinary "Hero & Heroine" along with a generous sampling of  "The Ferryman's Curse." Strawbs' first all-new album since 2008, and the secrets and stories that have seduced prog rockers for a half century.  Join us! 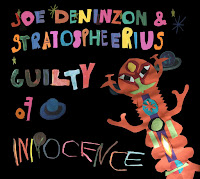 Joe Deninzon & Stratospheerius’ new album, GUILTY OF INNOCENCE (Melodic Revolution Records) is now in stores, both online and in the real world.

Along with the album’s release, Deninzon is touring actively this fall with Stratospheerius, as well as his Latin jazz String Quartet Sweet Plantain (who also will be part of classic rock group Renaissance’s concerts for the recording of their upcoming Symphonic Album. Joe is soloing on electric violin for the performances, as well).

Joe & Stratospheerius are rocking PROGTOBERFEST, in Chicago, on Saturday night October 22. They are having record release shows in favorite towns in the Midwest and the New York area, including the PROG HOUSE (Roxy & Duke’s in Dunellen, NJ) and on three SonicVoyage Fest dates this fall. See tour dates below.

Released on Melodic Revolution Records, a leading progressive rock label based in the U.S., GUILTY OF INNOCENCE features 10 tracks. Most of the album’s songs fuse lyrical and sonic elements heard in Tool, Tom Morello, Jack Bruce, and Jean-Luc Ponty. "Dream Diary Cadenza” is an instrumental solo piece from Joe's "DREAM DIARY" Concerto for Orchestra and Electric Violin, which he debuted with the Muncie Symphony Orchestra in 2015.  The album’s closing song is an epic 12 -minute piece which has Joe singing, “If music be the food of love, play on." The song features Testament/TSO/Metal Allegiance guitarist Alex Skolnick, Renaissance’s keyboardist Rave Tesar, and the Fringe’s Randy McStine.

Stratospheerius' members include French guitarist Aurelien Budynek (Cindy Blackman, Vernon Reid), bassist Jamie Bishop (The Syn, Francis Dunnery), and drummer Lucianna Padmore, praised by Modern Drummer Magazine for her “Deep grooves and serious fusion chops.” Lucianna wrote “Affluenza,” on the album, and Joe wrote everything else except for “Hysteria,” a reimagined, Queen-esque version of the hit by the UK band Muse.

Reviews of GUILTY OF INNOCENCE have been exciting. Zachary Nathanson’s MUSIC FROM THE OTHER SIDE OF THE ROOM blog states, “While Joe’s vocal arrangements are brilliant, alongside his electric violin comparing to Curved Air’s Darryl Way, Mahavishnu Orchestra’s Jerry Goodman, and Frank Zappa alumni Jean-Luc Ponty, they take inspirations between Zappa, King Crimson, Yes, and Muse…Guilty of Innocence is not only great, but one of the most hectic and heart-stopping albums I’ve listened to.”

Writes Haydn Seek at SkeletonPete.com: “Deninzon and company’s virtuosity is undeniable, but their arrangements smartly favor the integrity of the song. Like the best heavy rock tunes of the past, soloing is integral to structure rather than presented for the sake of blowing. It’s progressive music that’s not afraid of a catchy chorus. Even the 12 minute closing track “Soul Food” is a well crafted multi-tempo road trip. It ventures into magnum opus territory where ’70s rockers Kansas were at home, and features guest artist guitarist Alex Skolnick.”

Warlock Asylum International News loves Joe’s cover of Muse’s “Hysteria.” “Deninzon’s perfect vocal delivery and skills as a violinist. Stratospheerius is as tight as ever and really create a strong organic melody comparable to the original. Bravo! This is music!”

Joe Deninzon & Stratospheerius has showcased their “frenzied melange of progressive rock, jazz fusion and funkabilly” at colleges, festivals, and clubs throughout the US and has opened for Tim Reynolds, Mickey Hart (Grateful Dead), Martin Barre (Jethro Tull), Mike Stern, Project Object, and John Scofield. The group was a winner of the John Lennon International Songwriting Competition and the Musicians Atlas Independent Music Awards, and Joe is a repeat recipient of a BMI Jazz composers award. A favorite among violinists everywhere and an active clinician, Joe is the author of the Mel Bay-published book, ”Plugging In: A Guide to Gear and New Techniques for the 21st Century.”

GUILTY OF INNOCENCE on Spotify:
http://bit.ly/GuiltyOfInnocence

Posted by Anne Leighton at 2:40 AM