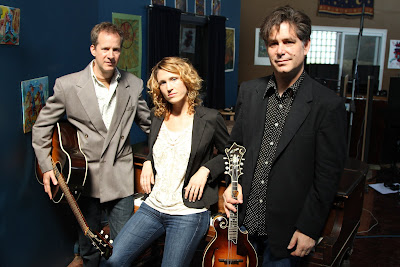 Emily Hurd introduces her new band, Stone Blind Valentine (also known as SBV), with the independent release of the album BURN LIKE A FIELD.  The album will be available through iTunes, the band’s website (http://www.stoneblindvalentine.com ), and live shows.

SBV is the acoustic project of longtime Chicago musicians Emily Hurd, Colby Maddox, and Gregg Ostrom.  Gritty lyrics and unruly guitar get a layer of polish from bright mandolin and sharp fiddle licks. The group treads on bluegrass while digging into rock and early American country. BURN LIKE A FIELD was recorded live at Chicago's King Size Sound Labs.

Like all good mountain music, SBV builds their tunes with strong singing, nature imagery, and a lot of twang, but their Chicago roots are unmistakable in BURN LIKE A FIELD.   The bluesy guitar and industrial groove in "Extra Extra" thump defiantly as Hurd belts out "Honey, I can read you like the Sunday Morning Times; I can see you're lying by the headlines in your eyes."  The group sings in three-part harmony about simple city days in "Crown The Kings," and "Whiskey Neat" sounds like late-night Bourbon Street in the July.

The songs on BURN LIKE A FIELD were penned by Emily, the lead vocalist, piano and banjo player.  A critically acclaimed songwriter, her music has appeared on NPR and TV’s NCIS.  The tunes were then brought to life by Gregg Ostrom (guitar, vocals) and Colby Maddox (mandolin, fiddle, guitar, and vocals).  SBV called on close friend and producer John Abbey to play upright bass on the album.

The BURN LIKE A FIELD recording sessions were filmed and photographed by the crew of Carla Englof Productions.  When the album is released, the video "Extra Extra" can be seen on Youtube and the band's web site: http://stoneblindvalentine.com 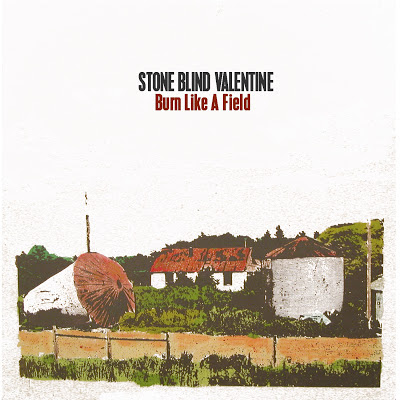 BURN LIKE A FIELD will be released to the public at two shows.  On February 16th, 2013, SBV will play at 7:30 pm at The Mendelssohn Performing Arts Center in Rockford, IL.  On February 17th, SBV performs at 2:00 pm at S.P.A.C.E. in Evanston, IL.  Tickets are available on the band’s website.

Posted by Anne Leighton at 3:12 PM 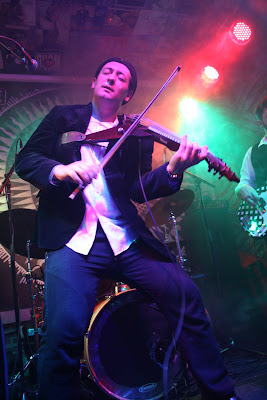 Joe Deninzon will be playing electric violin when he joins the best young orchestra (violin, viola, cello, bass) students in Oklahoma as they include orchestral versions of his compositions, most of which appear as rock songs on THE NEXT WORLD (Joe's most recent album with his rock band Stratospheerius). Joe and the OSU Honors Orchestra perform this January 26, at 7:30 pm, in the Seretean Center Concert Hall, at the University of Oklahoma Stillwell under the direction of OSU symphony orchestra conductor Douglas Droste. Professor Droste will also conduct "Perseus" by Soon Hee Newbold.

Joe will be rehearsing with the students on January 25 and during the day on the 26.

Joe Deninzon & Stratospheerius call themselves a "Rock group," with a musical range that combines jam, fusion, rock, progressive, virtuoso, singer-songwriter, jazz and hard rock. The band is on the soundtrack of the recent Will Ferrell/Adam McKay-produced movie, VIRGINITY HIT. Stratospheerius was a winner in the John Lennon Songwriting Competition, won the Online People's Choice Awards in the Cornucopia Festival, and was named "Best Jam Band" in Musician's Atlas Independent Music Awards. The band will be a subject of a feature in an upcoming issue of PROGRESSION magazine, in 2013.

Stratospheerius' new album THE NEXT WORLD is on Steve Vai's Digital Nations and Joe's imprint D-Zone Entertainment. The album was featured on over 80 radio stations and entered at #10 on the Jam Band charts, and stayed there for two months. BLOGCRITICS writes, "If Jeff Beck had been a fiddlemaster with a streak of humor." Binghamton's PRESS & SUN BULLETIN calls the group "innovative."

Joe Deninzon has written the book on Electric Violin--literally; Mel Bay books has released his "PLUGGING IN: A Guide To Gear and New Techniques for the 21st Century Violinist" at NAMM. Often called "The Jimi Hendrix of the Electric Violin," his innovative performances on the electric seven-string violin and his compositions blend rock, funk, jazz, classical, and Eastern European Gypsy influences. While leading Stratospheerius since 2001, Joe has worked with Bruce Springsteen, Sheryl Crow, Les Paul, Phoebe Snow, and Ritchie Blackmore, and President Clinton. He can be heard on over 100 recordings and jingles as a violinist and string arranger, including the new NIKE commercial which was repeatedly broadcast during the London Olympics.

Posted by Anne Leighton at 8:17 PM