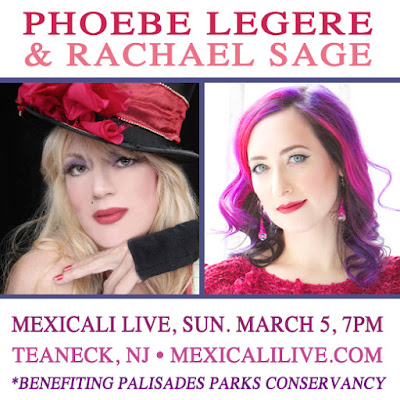 Singer-songwriters Phoebe Legere and Rachael Sage will be performing in support of the Palisades Conservancy at Mexicali Live, in Teaneck, on Sunday, March 5, 2017, at 7:00 PM.
Mexicali Live is at 1409 Queen Anne Road, in Teaneck, NJ.
Admission is $15.
The venue phone is 201-833-0011.
Website is mexicalilive.com.
Dinner seating begins at 6:00 PM.  For dinner reservations: Email us at reservation@MexiCaliLive.com or call 201-833-0011.

A percentage of the door’s proceeds will help support the  Palisades Parks Conservancy, which works throughout the Hudson Valley and Northern NJ to improve, protect, and conserve the 29 parks and historic sites owned and operated by the Palisades Interstate Park Commission which serve more than 6 million annual visitors.

Together Rachael and Phoebe’s teams, and the Palisades are creating an online auction on EBay with contributions from a variety of New Jersey musicians. Already contributing autographed items are Tony Bennett, Richard Barone and the Bongos, Metropolitan Entertainment, Matador Records with special vinyl releases from Yo La Tengo, alternative violinist Joe Deninzon, and Glen Burtnik’s band the Weeklings.

Phoebe and Rachael say that one of the first things they notice when entering New Jersey, and driving along the Hudson for work and pleasure are the Palisades.

The New York Post raved: “Phoebe Legere is magnificent!” Her "virtuoso piano playing" her "huge natural voice that moves easily from winsome sweetness to a sultry blues growl” and “brilliant, masterful songwriting” have made Phoebe Legere a legend. She has played with Joni Mitchell, David Bowie, Billy Joel, Steve Martin and John Hartford. Legere has performed thousands of shows from Country Fairs to NPR, from Folk Festivals to the Pow Wow circuit, from Songwriter Circles to a CBS Sunday Morning feature when she won First Runner-Up in “America’s Hottest Accordionist Contest” in Branson, MO.

Legere’s spectacular physical appearance has lead to numerous musical movie and TV shows including her starring role in one of the top 10 cult movies of all time: “Toxic Avenger” 2 and 3 in which Legere plays a blind accordionist married to New Jersey’s most famous environmental superhero. Phoebe Legere’s new  Americana CD “Heart of Love” is out on Valentine’s Day.

A soulful vocalist and innovative multi-instrumentalist, award-winning singer/songwriter and producer Rachael Sage is one of the busiest touring artists in independent music, performing 100+ dates a year with her band The Sequins throughout the US, UK, & Europe. She has earned a loyal following for her dynamic piano playing, delicate guitar work, soulful vocals and improvisational audience interaction. Sage has shared stages with Sarah McLachlan, A Great Big World, Judy Collins, Shawn Colvin, Marc Cohn, Jamie Cullum, The Animals and Ani DiFranco.  She has performed at the Edinburgh Fringe Festival and received numerous songwriting awards including The John Lennon Songwriting Contest (Grand Prize) and several Independent Music Awards. Her songs have appeared on MTV, HBO, the “Fame” soundtrack, and in the last 3 seasons of Lifetime’s controversial reality series,"Dance Moms.”

Posted by Anne Leighton at 2:46 AM

THE MAN WHO CHANGED GUITAR FOREVER Box Set and EIDOLON-a 2-CD Best Of To Be Released on Manifesto Records on April 7th. 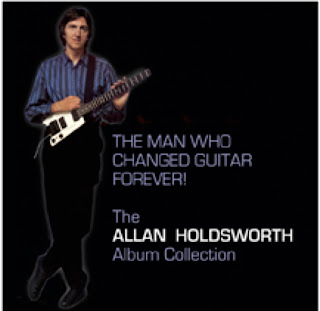 Manifesto Records referenced the box set’s seemingly portentous title from the cover story title featuring Holdsworth in Guitar Player magazine’s April 2008 edition.  Given his humble nature, Holdsworth is a bit embarrassed by the title and finds the notion that he changed “guitar forever,” somewhat overblown—more befitting of names like Orville Gibson, Leo Fender, or Ned Steinberger.

Holdsworth, born in Bradford England in 1946, embarked on a solo career as composer and bandleader exclusively in 1979.  Holdsworth’s career as producer, bandleader, and lead composer is documented in this box set, and with the artist’s 28-track selection of favorites in Eidolon. Both packages include extensive liner notes, and an updated 2016 interview with Holdsworth discussing each release, his history, and approach to the instrument.

From 1982 through 2003, Holdsworth recorded a dozen albums that have been lovingly put together for The Man Who Changed Guitar Forever collection. Featured on the box set are eleven remastered studio albums, starting with the 1982 studio release, Allan Holdsworth, I.O.U., and the archival 2003 live release, Then!, recorded live in Tokyo in 1990.  All feature additional bonus tracks added for special editions or the original Japan releases, along with the original artwork and studio credits.  Also included are the Grammy-nominated Road Games, (1983), Metal Fatigue (1985), Sand (1987), Secrets (1989), Wardenclyffe Tower (1992), Hard Hat Area (1993), None Too Soon (1996), The Sixteen Men of Tain (2000), and Flat Tire: Music for a Non-Existent Movie (2001).

He further expanded the guitar’s orchestral potential with a range of electronic effects, then moved on to become one of the early innovators of guitar-based synthesizer controllers. In the nearly five decades Holdsworth has been touring, collaborating, and recording, he has created an immense sonic and musical legacy.

In the ‘70s he played with legendary Miles Davis drummer, Tony Williams and Cream bassist Jack Bruce as the band Lifetime, and toured with Soft Machine. He worked with former Yes and King Crimson drummer, Bill Bruford’s first solo project, Feels Good To Me, and subsequent recordings with Jean-Luc Ponty, and Gong. Bruford suggested Allan for the progressive-rock “supergroup,” U.K., which, along with Bruford, also featured John Wetton and Eddie Jobson.

Both The Man Who Changed Guitar Forever and Eidolon will become precious to those who love the world’s great guitarists. Fans of deeply unique, sonically rich and pristine recordings of great musicians taking their music to the next level and beyond, will also be in awe of these collections. Posted by Anne Leighton at 4:47 PM