One of the things I'm finding in my fan power artist development work with my future classic rockers is that our long-time music industry colleagues, who've moved on to other things, are still fans, and still got the chops. The last half of 2010, I had a serious amount of work with all my artists, and asked a few folks to help me out in different capacities with some of my projects.

One was Veronique Cordier of V Entertainment, who kicked butt, collaborating with me on Ian Anderson's tour. She got lesser selling venues way UP. Her approach really is marketing oriented, and multi-faceted engaging everyone from talk and sports radio to bloggers. She has been expanding her PR firm in the last few years to include clients such as Unicef  (Wiggles song to raise awareness) and Boys & Girls Clubs (benefit concert marketing), where she integrates her experience in entertainment with her passion for social change. Think partnerships.

The other is Hank Bordowitz.  Many know him as the guy who has written significant books that detailed the whys of the ups and downs in the music biz, including DIRTY LITTLE SECRETS OF THE RECORD BUSINESS.  He's done a lot through the years in the music biz.  He has a great sensitivity, as well, to all genres, all music, and understands what it's like to be an artist.  He is a darn good A&R Consultant, and can do hands on work with acts.

If you're in a co-management/artist development and long-term growth relationship with artists and need help with that, while writing bios, press releases, Hank is great as a long-distance development person.  He's on SKYPE--most of the developing artists are, as well.

And a reminder, he is available for writing work.  He does a good job.  Think versatility and team players.

E-mails for both these terrific talents:
Veronique: ventnet@aol.com
Hank: Hank@bordowitz.com
Posted by Anne Leighton at 5:05 PM 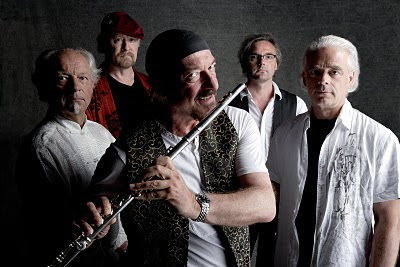 In celebration of the park bench, dribbly-nosed voyeur's 40th Anniversary, Ian Anderson returns to the USA with his band Jethro Tull, starting June 8 in Denver, CO and ending on the 27 in Chicago, IL.

The group features longtime members Ian Anderson (flute, vocals, acoustic guitar) and Martin Barre (guitars), Doane Perry (drums), as well as David Goodier (bass) and pianist John O'Hara. The latter two joined in 2006 after working with Ian on some of his solo projects.

The group will be performing the Aqualung album in its entirety plus a range of their other favorites from the lat 42 years. Critics dubbed AQUALUNG “a concept album,” particularly for Ian's critical, skeptical views of organized religion, mostly on side B ("My God," "Hymn 43"). Anderson has disputed - almost resented - the assessment seeing the record as "just a bunch of songs." This led the band to give the critics a full-blown concept album with the following studio release THICK AS A BRICK which topped the Billboard charts in 1972.

On AQUALUNG, the group explores the struggles of the less fortunate in our society (e.g., "Aqualung," "Cross-Eyed Mary," "Up to Me"). Teenage angst and formal education difficulties (e.g., "Wind Up") are explored, and Ian returns to his parental themes with "Cheap Day Return," a tune encompassing Anderson's feelings while traveling North on the train to visit his sick father. "Locomotive Breath" touches on the issues of globalization, population expansion and runaway economics. Sound familiar?

Formed in 1968, Jethro Tull released its first album THIS WAS late in that year and followed up in 1969 with STAND UP. In the 1970s, the group was one of the most successful live performing acts on the world stage, rivaling Zeppelin, Elton John and even the Rolling Stones. Surprising, really, for a group whose more sophisticated and evolved stylistic extravagance was far from the Pop and Rock norm of that era.

With now some 30-odd albums to their credit and sales totaling more than 50 million, the apparently un-commercial Tull continues to perform over a 100 concerts per year with its rich variety and depth of expression, wherever fans, young and old, want to hear Rock, Folk, Jazz and Classical-inspired music. Music for boys in long trousers and girls with brains.

In 2006, Ian was awarded a Doctorate in Literature from Heriot-Watt University in Edinburgh, the Ivor Novello Award for International Achievement in Music and, in the New Years Honours List 2008, an MBE for services to music. In 2012, he expects to be awarded the Smithsonian Medal of Honor for smelling OK for someone his age and having ears still in proportion to the rest of his head. His bladder remains elastic and his prostate the size of a pinhead.

TOWER OF POWER CELEBRATE ITS 40TH ANNIVERSARY WITH ALBUM, DVD AND REUNION

It’s spring! As we celebrate the start of the baseball season, the end of the basketball season and the release of Tower of Power’s 40th Anniversary album, the operative phrase in everyone’s ears is “We Came To Play.”
But then, Tower of Power has “come to play,” every single time they take to the stage over the last 42 years. The horn driven soul and funk machine has toured consistently playing to so(u)ld out crowds around the world. And after 40 years, four of the original musicians still play with the band.
Similar to sports teams, however, Tower of Power has had numerous players take free agency with other musical prospects. So the 40th Anniversary show gave the band an opportunity to stage their version of “Old Timer’s Day,” bringing 20 former members to work with the ongoing ten player line-up.
“When we were young and we’d lose somebody, it seemed like the end of the world,” TOP founder Emilio Castillo told Gary Graff. “But it started happening at such an early age in our career, and we always overcame it and always got great people to come in.”
Captured live at the Legendary Fillmore Auditorium in San Francisco in 2008, this extraordinary show welcomed such former members as Greg Adams, TOP’s trumpeter and arranger for 20 years and subsequently one of the architects of the “smooth Jazz” sound; Chester Thompson, who moved on to play keys for Santana and Elton John; and chart topping “smooth jazz” sax player and first call session guy Richard Elliott.
At a show recorded on the band’s actual anniversary, former TOP member Lenny Pickett, long time sax player for the Saturday Night Live band, joined in. He’s in the bonus footage and is interviewed. Legendary vocalist Sam Moore, of Sam and Dave, added to the funkified festivities with “I Thank You,” and Otis Redding’s “Mr. Pitiful.” The DVD is dedicated to Steve “Skip” Mesquite, long time alto player for TOP, who made the show and passed on shortly afterward.
The CD and DVD package is a slam dunk of soulful funk, with such great Tower of Power hits as “What is Hip?” “You’re Still A Young Man,” the ever timely “Only So Much Oil In The Ground,” and “This Time It’s Real.” After 40 years, this band can clearly still hit it out of the ballpark.
“It was probably the most special night of our entire career,” said Castillo. “Getting together and playing again with those guys we’d spent so much time with on the road. It was magic.”
#030111#
Posted by Anne Leighton at 8:26 PM 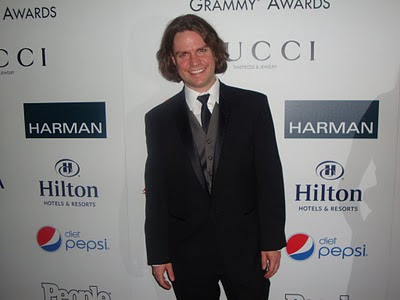 FUNDRAISING:
Jann Klose's fundraiser for his next album will be celebrating in the form of a fundraising concert at the Rockwood Music Hall Stage 2, 196 Allen Street, New York, New York, at 7:30 PM, on April 29, 2011.  Admission TBA, there will be very special guests. The venue phone is 212-477-4155.


(Jann Klose on the Red Carpet for the Grammy Awards)

Unaffiliated with overpopulated crowd-funding sites, Jann is funding his new album on his own site, http://www.peoplerecordsmusic.com.

Fans can choose from over 40 exclusive items, including: download of new album: $10, Jann's favorite German recipe (hand-written) for $40, Skype video chat with Jann singing a song of your choice for $40, a music career consultation on Skype with Jann and me for $250, and "Executive Producer" and "Patron" credits for $10,000 and $25,000.  Details of the fundraising campaign are at Jann's site, http://www.peoplerecordsmusic.com.

REVERIE recouped three times over, received airplay on over 140 radio stations, praise from the media including this Washington Post quote, “Klose wins over the listener with soaring voice, which may well be a staple of chamber pop for a long time to come."  Later this year, Jann will be releasing a speciahis sol REVERIE collectors edition with two extra songs from the sessions and the music video "Doing Time."

TEACHING:
On March 2, 2012, Jann will be presenting a Master Class on DIY TOURING AND CAREER BUILDING at The Liverpool Institute For Performing Arts.  The school was founded by Sir Paul McCartney and Mark Faetherstone-Witty, in 1996. Jann is excited to be returning to one of his favorite UK cities for his fourth UK tour, which will include a few more classes and even more shows.  He will also be touring his native Germany again, where he gained representation with Nic Events late 2010.

At Liverpool Institute, Jann will his explain his approach to building and sustaining his music business on principles of dialogue, cooperation, and commerce. This cooperative attitude includes collaborations with regional and international leads in government, media, corporate, business, educational, charitable organizations, and the fans.

Jann is available for interviews on this new means of building, sustaining, and funding a music business.