Here is a media release on Howard Bloom's new book, THE GOD PROBLEM: HOW A GODLESS COSMOS CREATES. 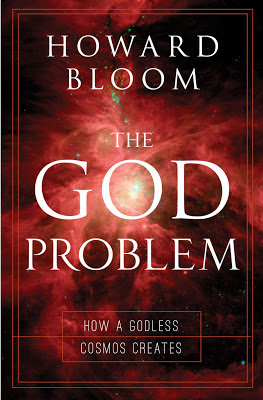 THE BIG BAGEL THEORY: THE END OF THE UNIVERSE IS SOONER THAN YOU THINK
(Scientific Thinker Howard Bloom Doing Interviews For New Book, THE GOD PROBLEM: HOW A GODLESS COSMOS CREATES)

Watch out. The end is coming.

Howard Bloom is available for interviews for his new book, THE GOD PROBLEM: HOW A GODLESS COSMOS CREATES on Prometheus books.

Most cosmologists feel the end of the cosmos will not arrive for hundreds of trillions of years. But Bloom's "Big Bagel Theory--The Bloom Toroidal Model of the Uiverse" predicts the end of the universe may be as little as 1.68 billion years away.

The Big Bagel Theory has already proved its predictive powers. Bloom, the author of THE GOOD PROBLEM, THE LUCIFER PRINCIPLE, GLOBAL BRAIN, and THE GENIUS OF THE BEAST, pieced together his bagel theory in 1959. Bloom has been involved in theoretical physics and cosmology since he was ten years old. In 1959, at the age of sixteen, he was working for the summer at the world’s largest cancer research facility, The Roswell Park Cancer Institute in Buffalo, NY. Bloom conceived his toroidal model of the universe in a two and a half month period of brainstorming with other Roswell Parkers on the implications of CPT (charge, parity, and time) symmetry. At the end of the summer, Bloom finished his Big Bagel Theory, then threw it away, convinced that it was comic book science.

But then other experts noted two of the Big Bagel Theories' predictions were--indeed--on target: 1) the cosmos had apparently expanded at unbelievable speed in the first flash after the big bang; 2) and the Cosmos’ expansion had slowed down, then accelerated again.

In 1980, Alan Guth confirmed prediction number one--the extraordinary speed of expansion in the newborn universe--with his theory of inflation, a theory that is now standard in cosmology. Then, in 1998, Adam Reiss and nineteen collaborators measured type 1a supernovas, standard candles, and discovered that the cosmos’ expansion had begun to pick up speed 6.02 billion years ago. Which left a question: where did the energy for that acceleration come from? Big Bagel Theory answers that question brilliantly.

So Bloom resurrected his 52-year-old Big Bagel Theory and made it the maraschino cherry on the cake, the ending concept, in his newest book, THE GOD PROBLEM: HOW A GODLESS COSMOS CREATES. Penn State loop quantum gravity cosmologist Martin Bojowald calls THE GOD PROBLEM, "Rigorous, and thoroughly mathematical." Harvard's Dudley Herschbach, a 1986 Nobel Prize winner in chemistry, says THE GOD PROBLEM is, "Truly awesome. Terrific." “I like the model," states NASA Goddard Space Flight Center systems engineer Mark Lupisella, "I’ll never look at bagels the same way again.” And National Magazine Award winner and science-junkie Barbara Ehrenreich says, "If Howard Bloom is only 10 percent right, we'll have to drastically revise our notions of the universe… Bloom’s argument will rock your world.”

The Big Bagel theory is explained in a new YouTube animation (see http://www.youtube.com/watch?v=wdJyafSBCb0), a video that pulled in over half a million hits in its first thirteen days online. Says Bloom, "the public appears to be hungry for a simple explanation of dark energy."

Concludes Brian Smith McCallum in Library Journal, "Bloom, an iconoclastic and seminal thinker, has been mentioned in the same breath as Stephen Hawking, Sigmund Freud, and Charles Darwin; this contribution is paradigm-shifting.”

Posted by Anne Leighton at 7:43 PM 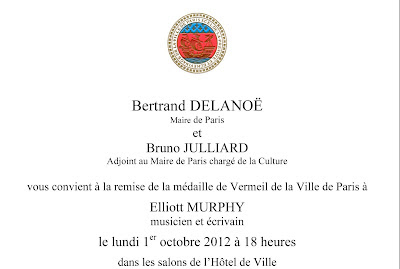 Internationally acclaimed singer-songwriter and author Elliott Murphy, who has been living in Paris, France for 22 years, was awarded the prestigious Medaille de Vermeil de la Ville de Paris in recognition of his career achievements in a formal ceremony on October 1 at the Hotel de Ville (City Hall) presided over by Paris Mayor Bertrand Delanoë.

Elliott began his career with the classic album “Aquashow” in 1973 and has released over 30 albums as well as being the author of two novels and numerous short story collections. He has often joined his long time friend Bruce Springsteen on stage in Paris.

Elliott will make his yearly East Coast tour in December 2012.