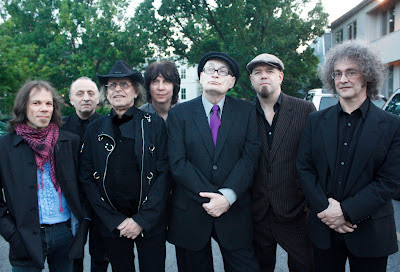 Five-part vocal harmony, violin, cello, bass, drums and percussion, guitars, keyboards is the 10-piece band The Left Banke. Acknowledged as the forerunners of the Baroque Pop genre, which is finding its way into popularity through musicians including the Decemberists, the Shins, Fleet Foxes, and Regina Spektor, The Left Banke is experiencing a renaissance as two of the orignal members Tom Finn and George Cameron are leading the band these days.

The Left Banke finds support from the music world, including contemporaries The Zombies, who the band is sharing bills with this summer in New York City and Washington, DC. Sundazed Records has re-mastered PRETTY BALLERINA and THE LEFT BANKE TOO on CD and 180gr vinyl; the collection has never-before-seen pictures and extensive recording information. HUFFINGTON POST praises The Left Banke's live shows, "Each song sounded as fresh as the last time it was played onstage, and if you squinted and didn't look too clearly at the stage or register the drink prices it could have been 1968 again."

Since 2011, when the group sold out shows in New York City's DROM and Joe's Pub, and collaborated on a Christmas program with WNYU's Choir, Finn and Cameron have been honing their touring chops, adding shows in the Mid-Altantic and New England, and rehearsing a band with musicians of several generations.

Finn and Cameron have received MORE than just the blessings of original members Michael Brown and Steve Martin as both have been writing new songs with the band. Brown also joined the group on stage to play piano when the group played at BB King Blues Club.

Originally formed in New York City in 1965, The Left Banke came to prominence with the orchestral and melodic "Walk Away Renee," which featured a harpsichord and a string quartet. “Walk Away Renee” was shopped to every major label, and turned down by all except Smash, a subsidiary label of Mercury Records. It charted in 1966, reaching #5 on the Billboard charts.

Leonard Bernstein (Conductor of the New York Philharmonic Orchestra and brilliant composer of many musicals including WEST SIDE STORY and CANDIDE), stated"The Left Banke and 'Pretty Ballerina' are an example of what good pop music can be" on his CBS-TV special, INSIDE POP - THE ROCK REVOLUTION. Two albums were released: WALK AWAY RENEE/PRETTY BALLERINA and THE LEFT BANKE TOO. Bad management and poorly-planned tours broke up the group in 1968.

Through the years, the music of The Left Banke has gained legions of new fans and a lot of newfound credibility, as evident by Oasis' front man Noel Gallagher's recent comments in the press, where he praises The Left Banke, as "the best f*****g record I've heard in my life!" A wide range of artists have covered "Renee," including the Four Tops, Tori Amos, Frankie Valli, Vonda Shepard, Billy Bragg, The Association, Linda Ronstadt, Marshall Crenshaw, Southside Johnny, Badly Drawn Boy, Bon Jovi, and Rickie Lee Jones. It's performed in the Dolly Parton/Queen Latifah movie, JOYFUL NOISE.

In 2008, Rolling Stone Magazine ranked it #220 in their list of The 500 Greatest Songs of All Time. The song is in the movie THE BODYGUARD and on the soundtrack of ADDICTED TO LOVE. "Pretty Ballerina" appears in APOCALYPSE NOW, while Alice Cooper, John Mellencamp, and the Dickies kept the beauty and mystique in their covers of the song in their versions. The Bangles Susanna Hoffs and Matthew Sweet (as Sid 'n' Susie) and also Anne Murray covered "She May Call You Up Tonight."

So many artists have been part of the Left Banke's history. In addition to "Martin," there was a Steven Tallarico who sang back up on the album LEFT BANKE TOO. The other Michael than Brown, who sang with the band was "McKean," who we now know as a great actor. So as The Left Banke continues to create music, we'll see discover new stories of this growing group.

THE LEFT BANKE ON TOUR

Posted by Anne Leighton at 4:31 PM 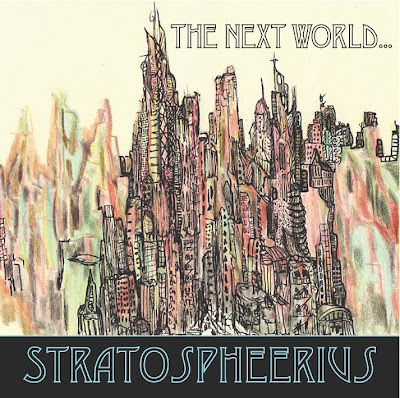 Powderfinger Promotions, who is promoting Stratospheerius' new album, THE NEXT WORLD to AAA Radio, Jam Band and College Radio, is getting adds out-of-the-box from many stations, including heavy rotation on WNSU-Ft. Lauderdale and KPFK-Los Angeles, and other indicators KUMD-Duluth, WERS-Boston, WAER-Syracuse.

Powderfinger Promotions, helmed by David Avery, has worked a number of charting campaigns including releases from: Medeski Martin & Wood, Esperanza Spalding, Gov't Mule (w/ Ben Harper), String Cheese Incident, Victor Wooten... David says Powderfinger's slogan is "nurture the urge," and he was compelled to work with Stratospheerius' album THE NEXT WORLD because of its variety, "It's a great pleasure to be promoting a group as talented and exciting as Stratospheerius. I see great things for them and am thrilled to be part of the team that's bringing their music to the public."

The album is being worked to college, AAA, and jam band radio. Plug songs to jam band radio from the album are:
the glorious RELEASE, the genre bending--electronic/ska-inspired TECH SUPPORT, and, the whiplash-inducing ROAD RAGE. Other songs receiving attention from radio programmers are: "The Prism," "One Foot In The Next World," "The House Always Wins," "Climbing," and "The Missing Link.

Critics continue to weigh in on the album, Progressive Ears' Angel Romero says THE NEXT WORLD is “A leading contender for the best rock album of 2012… Joe Deninzon’s dazzling violin solos, creative loops and effects are clearly spectacular and demonstrate that he is one of the most talented instrumentalists in the current rock scene.” MUSIC STREET JOURNAL's G.W. Hill writes, “You just can’t go wrong with this outfit. Nor can you assume what you are going to hear when they release a new disc. While the fusion elements of previous releases are still present, this one has more pure rock in it, too. Frankly, this might be the best Stratospheerius disc yet!”BLOGCRITICS writes, "If Jeff Beck had been a fiddlemaster with a streak of humor." Binghamton's PRESS & SUN BULLETIN calls the group "innovative."

Stratospheerius members are: Joe Deninzon-electric violin/mandolin/vocals, French guitarist Aurelien Budynek (Cindy Blackman, Vernon Reid), bassist Jamie Bishop (The Syn, Francis Dunnery), and drummer Lucianna Padmore (praised by Modern Drummer Magazine for her “Deep grooves and serious fusion chops.” The group's leader Joe Deninzon has written the book on Electric Violin--literally; Mel Bay books has released his "PLUGGING IN: A Guide To Gear and New Techniques for the 21st Century Violinist." Often called "The Jimi Hendrix of the Electric Violin," his innovative performances on the electric seven-string violin and his compositions blend rock, funk, jazz, classical, and Eastern European Gypsy influences. While leading Stratospheerius since 2001, Joe has worked with Bruce Springsteen, Sheryl Crow, Les Paul, Aretha Franklin, Ritchie Blackmore, and President Clinton. He can be heard on over 100 recordings and jingles as a violinist and string arranger, and receently on the soundtrack of the Will Ferrell/Adam McKay-produced movie, VIRGINITY HIT. 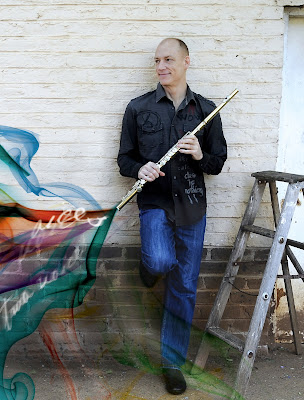 After wowing audiences at SXSW in 2010 and 2011, South Africa’s Top Flautist Wouter Kellerman returns to the United States this July and August. Shows include dates at the Kennedy Center’s Millennium Stage July 26, Summerstage and Joe’s Pub in New York City on August 6 and 7. These shows, in particular, were booked by Wouter and his manager Tholsi Pillay from their homebase in Johannesburg, South Africa. More shows are being scheduled now along the East coast, in Las Vegas, and Southern California.

Wouter’s album “Two Voices” won the 2011 SAMA (South African Music Award, the SA equivalent of the Grammy) for “Best Instrumental Album,” and reinforces his status as one of South Africa’s foremost musicians. Inspired by styles and cultures drawn from South Africa and around the world, Wouter Kellerman takes his listener on a musical journey through African, Latin, jazz and Celtic sounds, with classical inflections.His debut album, “Colour,” enjoyed rave reviews, topped the charts and was nominated for a 2008 SAMA for “Best Instrumental Album.” His DVD “Kellerman Colour Live” won the 2010 SAMA for “Best Jazz/Instrumental/Popular Classical DVD.”In March 2010 and 2011 he performed at the South by Southwest (SXSW) music festival in Austin, in Texas. SXSW is the biggest music festival in the USA. Wouter’s flute-playing can be heard on the soundtrack of the Emmy Award-winning film “Eye of the Leopard.” His albums “Colour” and “Two Voices” were mixed in Los Angeles by Grammy-winning engineer Husky Hoskulds.In 2010 Wouter performed at the FIFA Soccer World Cup Closing Ceremony for a global TV audience of 700 million people, followed by Concerts at the Standard Bank Joy of Jazz festival in Johannesburg and two performances at the Shanghai World Expo, China.Passionate about teaching and empowering young people, Kellerman has sponsored the living expenses of 10 children in the SOS Children’s Village in Ennerdale for the past 14 years, and also financed the building of a house in the SOS Children’s Village in Rustenburg. For his continued efforts in helping give these children a better life, Kellerman was nominated by the SOS Children’s Villages for the Inyathelo Special Recognition Award for Philanthropy. He continues to facilitate the teaching of young dance and music students.Wouter Kellerman started playing the flute at the age of 10, and in 1981 appeared as a soloist with the Johannesburg Symphony Orchestra. He went on to feature in several South African orchestras, scooping musical accolades along the way. Among these was winning the Perrenoud Foundation Prize during the 1997 Vienna International Music Competition.Using his classical training as a foundation, Wouter focuses his attention on world music, exploring the versatility of the instrument and fusing classical and contemporary sounds, resulting in a potent and thrilling musical encounter. He is taking his crossover world music to a global audience, having gained a solid following in South Africa. He has already released the album in Germany, Austria, Switzerland and most recently in Australia, where he combined his release with a nationwide tour, which included a support slot on Johnny Clegg’s Down Under tour. 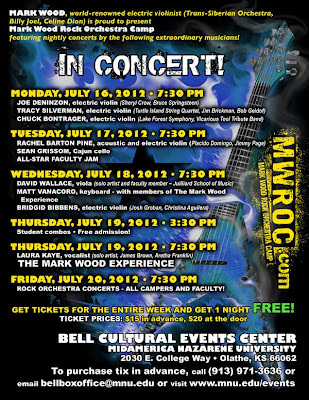 If you are ANYWHERE near the Kansas City area, make sure you get tickets to any or all of the FIVE concerts at the Bell Center while Mark Wood Rock Orchestra Camp is in town! Performers will include The Mark Wood Experience, Rachel Barton Pine, Tracy Silverman, Joe Deninzon, and will culminate with all campers and faculty sharing the stage for the LOUDEST ROCK ORCHESTRA IN THE WORLD!! For more information on all the performers, please visit the camp website and/or click on the concert flyer!

SPREAD THE WORD! SHARE THIS WITH EVERYONE YOU KNOW! LET'S PACK THE JOINT!

Mark has brought together some of the country's most revered musicians and educators to work with the camp attendees, and they will be offering performances - open to the public - throughout the course of the week. Special reduced tuition to MWROC is available for area residents.

All concerts will take place in the state-of-the-art concert hall at the Bell Cultural Events Center on the campus of MidAmerica Nazarene University, 2030 E. College Way, Olathe, KS 66062.

Joe Deninzon, electric violin--hailed by critics as “The Jimi Hendrix of the Violin” because of his innovative style on the electric seven-string violin and his compositions combining jazz and rock with Gypsy influences. A musician who transcends many genres, he has worked with artists such as Sheryl Crow and Bruce Springsteen.

Tracy Silverman, electric violin--lauded by the BBC as “the greatest living exponent of the electric violin.” The world’s first concert electric violinist, he has worked with artists such as the Turtle Island String Quartet, Jim Brickman, and Bob Geldof.

Chuck Bontrager, electric violin--Chuck Bontrager uses his electric violin to play lower than most cellos and louder than most guitars. He obviously chose the wrong instrument. He’ll keep it up until his students, friends, bandmates, and old teachers (like Myron Kartman from Northwestern) tell him to stop. You can also find him playing “regular” with the Lake Forest Symphony, the Chicago Sinfonietta, and the occasional Broadway in Chicago production.

Posted by Anne Leighton at 9:25 PM