Ever since Jann Klose sang and played guitar for Tim Buckley's parts in the movie, GREETINGS FROM TIM BUCKLEY (due on DVD/Blu Ray September 17) he's been on a journey to find out what made Tim Buckley tick as an artist.  This included connecting with some of Tim's collaborators, including (original bandmate and bassist) Jim Fielder and (poet/lyricist) Larry Beckett.  The three performed shows in the Pacific Northwest in Beckett and Fielder's hometown of Portland (August 21) and in Seattle (August 24).

Larry, who co-wrote many of Tim Buckley's songs including "Song To the Siren," which Jann covered on his current album, MOSAIC, is now writing songs with Jann. The first two songs are SUGAR DADDY and AFTER THE LAST.  Jann and Larry are BMI songwriters, and look forward to creating more music together.

The LAist's Matthew Bramlett states, Jann "can be accurately described as the man chosen to carry on the legacy of great musicians like Tim Buckley and Paul McCartney."

Posted by Anne Leighton at 5:17 PM

Five bands will be performing a benefit concert at the Shrine on September 26 to help David Gotay and his family fight cancer.
The event starts at 6 pm with musician friends of David available for conversation.
The concert begins at 7 pm and runs until midnight.
The Shrine is at 2271 Adam Clayton Powell Blvd. (at 135th Street), in New York, NY.
The web site is www.shrinenyc.com

David Gotay is a cellist, composer, rapper, and musical educator based in New York City. David has played with artists including Billy Joel, Jay Z, Sheryl Crow, Alicia Keys, and is the co-founder of the Sweet Plantain Quartet (www.sweetplantain.com).  Sweet Plantain combines street music styles and classical, and has been a favorite in the arts theaters, PAC centers and schools over the past half decade, playing from Alaska to Florida.

In May of 2013, David was diagnosed with Stage IV Renal Carcinoma (kidney cancer). The cancer has spread to his brain, partially paralyzing his arms and hindering his ability to play the cello, which is his main source of income. David’s health insurance does not cover his treatments, which include multiple surgeries to remove tumors in his brain and throughout his chest, as well as chemotherapy and radiation treatment.  Furthermore, David has a wife and children.

Friends and fellow musicians have been fundraising to help David's family, and also created a Facebook page that some background information: https://www.facebook.com/DaveFightsEvilCancer

This concert involves five incredible bands, each with a personal connection to Dave:

Admission to the concert is free, but all donations and sales of merchandise will go towards helping David pay for his treatment and living expenses.

Please come and hear some incredible music and help support our friend in the fight for his life!

JANN KLOSE Joins Tim Buckley Collaborators in Open Secret, a Night inspired by Buckley in Portland on August 21 and Seattle on August 24 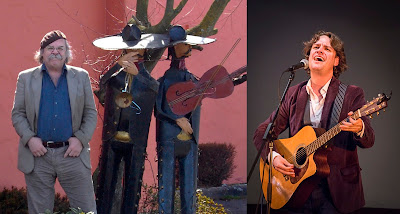 JANN KLOSE and Poet/Tim Buckley collaborator LARRY BECKETT will be presenting two evenings of the music and words of Tim Buckley, and their own works in Portland and Seattle this week.  Tim's original bassist Jim Fielder will be accompanying both Jann and Larry.

On August 21, Jann and Larry will perform at the Secret Society, in Portland.  The web site is www.secretsociety.net  Jack McMahon, who is a contemporary of Tim's, will be opening in Portland.

Jann and Larry will be at Cafe Racer on August 24, in Seattle.  The web site is caferacerseattle.com/

Larry and Jann forged a partnership after Jann sang Tim Buckley's parts in the movie GREETINGS FROM TIM BUCKLEY,  (Tribeca Film/Focus World) which will be out on DVD and Blu Ray on Sept. 17.  In exploring Tim's music, Jann sought out Larry, who gave him insight and inspiration.  Now they appear together, and are also writing songs together.

Jann's new album, MOSAIC is now on iTunes and Amazon and Spotify. Writes Paul Freeman at the San Jose Mercury News, "Klose shows he can create diverse new tunes that rival those of such masters as (Tim) Buckley.

MOSAIC is finding support from a variety of edgy characters, including TIME Magazine Columnist Joel Stein, who pranked Jann in his column, and Genya Ravan will be spinning “Make It Better” on Little Steven's Underground Garage show, GOLDIE'S GARAGE in time for Election Day.

The LAist's Matthew Bramlett states, Jann "can be accurately described as the man chosen to carry on the legacy of great musicians like Tim Buckley and Paul McCartney."

Jim Fielder has played with Tim Buckley, Buffalo Springfield, Blood, Sweat & Tears, and is still on the road with Neil Sedaka.