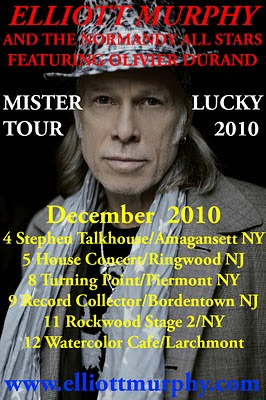 Rock troubadour Elliott Murphy will be performing The Mister Lucky Tour this December 4 through the 12 with dates in New York City, Amagansett, NY, Bordentown, NJ, Piermont and Larchmont, NY. His band The Normandy All-Stars (guitarist Olivier Durand, drummer Alan Fatras, bassist Laurent Pardo will be on hand to rock).

Elliott Murphy first came to prominence over 35 years ago with the release of the now-more-relevant-than-ever album, AQUASHOW. That, along with NIGHT LIGHTS, LOST GENERATION, and JUST A STORY FROM AMERICA were played on mainstream radio throughout the United States. These albums were also picked up internationally, especially in Japan and Europe, where Elliott has found international stardom. 20 years ago he moved to France. At that point he last played the United States in 2000 at New York City's Bottom Line, and his last west coast dates were in 1996. In 2008, December, when his son Gaspard started studying at SUNY Purchase in New York, Elliott was invited to start performing in the States again.

Elliott has released 30 albums, his latest is NOTES FROM THE UNDERGROUND, which has received 5 stars on the prestigious music site, ALL MUSIC.COM. In 2011, look for his album, ELLIOTT MURPHY, which was produced by Gaspard Murphy.

Some of the musicians who've collaborated with Elliott on his recordings are Bruce Springsteen, Billy Joel, Phil Collins, and the Rolling Stones' Mick Taylor. Elliott was also honored with a monumental exposition, LAST OF THE ROCK STARS-RETROSPECTIVE at Paris' Town Hall, and has been cited in literature in the work, SAVAGE DETECTIVES by the late Roberto Bolano, who now has a best-seller book called, 2666.

Elliott, who is already played on Sirius-XM's the LOFT, and was the subject of a story on an upcoming Bob Edwards' show on the satellite station. Recently he acted in the French movie "La Ligne Blanche."

The Schenectady Gazette's Brian McElhiney says, "Murphy gives hungry cadre of stateside fans what they came for." Indeed the fans also are receiving more than their money's worth. One Boston fan blogged, "Murphy sang with the resilience of a survivor who will always continue to grow and change. His performance let us in on a taste of what his journey has been like. I know I felt changed by it. Murphy's show was a true rock 'n' roll baptism."