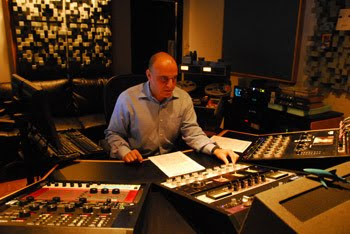 Fred Kevorkian at the mixing board

The final part of the job in completing the sound of Gentle Giant albums (IN A GLASS HOUSE, THE POWER AND THE GLORY, FREE HAND, INTERVIEW, PLAYING THE FOOL: THE OFFICIAL LIVE, THE MISSING PIECE, and GIANT FOR A DAY) for CD and vinyl is the mastering process.

The job includes listening to the artists, finding out what kind of audio shine they want in the albums, plus making sure each song's level and brightness are consistent.

Fred came of age in the '70s in France, and his favorite bands were rockers--AC/DC, Sex Pistols, the Rolling Stones. He liked more simple music, so he didn't listen to Gentle Giant growing up, though he knew of them.

In tackling the Gentle Giant re-releases, he was pretty impressed with the musicians of the band, "They knew how to handle their arrangements. It would seem the music would drift in parts, and then return, and go in a way that was meant to be."

He notes that "50% of the job in mastering recordings is the relationship you have with the musicians. You have to understand the artist's point of view for their songs and sensibility." After Ray Shulman remixed the albums from the band's original 1/4 tapes from the original Abbey Road sessions, they expressed what they were looking for in the masters. The band members even expressed things they didn't like about those albums through the years!

LET'S GET A GENUINE, UNSIGNED BAND INTO THE CHARTS--TWO ARTISTS' STORIES!

Black Daniel, a London-based rock and punk band with a range of soulful and classic punk/new wave influences, are one of 10 finalists in the Facebook contest, LET'S GET A GENUINE, UNSIGNED BAND INTO THE CHARTS.

"I liked the bands that weren't even in the running," said Black Daniel's frontman Craig Louis Higgins Jr., who picked Splash Theory and Me My Head as favorites. "They play the type of music I'm into. I also thought Sundae Club (who have an ELO influence) was pretty good."

Black Daniel worked to get the band's fans to vote, e-mailing and making calls to friend to vote for them at all the contest's levels. On its own, the band has worked very hard the past four years to build its following, including finding opening slots for Bryan Adams and Kasabian. Recently the Rough Trade record store offered to have the band do an instore, which the group is--of course--very excited about. Black Daniel does not look at this contest as a "make or break" for their career, but an opportunity. Higgins says, "We've got good things happening."

The finals of the contest are only on Facebook at http://www.facebook.com/unsigned, at the link entitled "Polls."

Contest organizer Oliver Tooley says he did this to allow more people to vote. Previously there was one vote per IP address but this stopped people in the same house or same company from voting. Unfortunately that has led to a small number of complaints from bands that their fans do not have Facebook accounts.

"It doesn't matter what system you use, someone will not be happy, but the group started on Facebook and it is natural to end it there as well." The fact is that with over 1859 votes (as of 6 AM GMT on 17 February) already is clearly not an obstacle for some. The leading band already have more votes than Facebook OR Myspace fans so maybe it is truly about the music and not partisan fans."

Tooley says he's also received support from people from different parts of the music industry. People are scouting bands on his Facebook page, with a recent post, seeking a band to replace a drop out from a battle of the bands at the Chester Hangman, in Chester. He's heard from independent musicians, journalists, and terrestrial and online radio stations. This Friday night, Leeds' based radio programmer Bill Horncastle will be featuring the top 10 artists and other contenders on his radio show on Vixen 101.

Tooley is ecstatic over the amount of people who've joined the Facebook group, which (as of 6 AM GMT on 17 February) was at 8465 members. He's hoping 5000 people vote and also buy the MP3 of the contest winner in hopes the recordings hit the charts...as is whoever wins the contest on February 20. While people are quick to compare Tooley to the judges on X-FACTOR, he shrugs, "I want to align myself with radio legends like John Peel and Steve Lemacq. These people are not afraid of playing stuff that people aren't ready for. I'm interested in new ideas, and it's obvious the acts in this contest are, as well."

LET'S GET A GENUINE UNSIGNED BAND INTO THE CHARTS: TWO ARTISTS' STORIES

New York City-based pop singer/songwriter Jann Klose's song "Doing Time" is in the semi-finals of an intriguing Facebook "battle of the bands"-styled Internet contest called, "Let's Get a Genuine Unsigned Band into the Charts." The contest allows everybody to listen to songs by independent musicians, rate them by how they like the songs at the link http://www.french4tots.co.uk/unsignedbands/index3.html . On February 21st a winner will be chosen, publicised, and members can buy the artist's MP3 single over the course of a week, making the song hit the charts.

The contest was thought up by Oliver Tooley, a London-based singer who fronts the group Led Zep Too.  He also has a volume of original music, and has always supported independent music. An example is how Klose met him, after his agent mistakenly called Tooley's number to find a gig in London. As Tooley was familiar with the talent buyer's name, he gave the agent advice and UK leads for gigs, and then turned out for Klose's first show in England.

Through the years Tooley's presented small battles of the bands on MySpace, and only "got as many as 12 votes for one band!"

In late 2009 he realized it takes about 5000 people to buy an MP3 to have it place on the UK radio charts, and decided to start up the Facebook group. First, he invited all his friends, on the first day he had 250 members in his group, by day two there were 500 people.  Says Tooley: "It was growing exponentially, at the end of the first week there were over 2500 people. Now we have 8000 members and this is only five weeks old."

84 bands were in the first round. The second round of voting features 31 bands.  Most are from the UK. One group, Anielka, is from Finland. Klose (who was born in Germany, raised in Kenya and South Africa) lives in New York City. Power trio-with-a-singer Paint Box and songwriter Bill Monaghan are from Pennsylvania.

The contest has found Internet airplay, including BBC 6 and Hamiltonradio.net, as well as terrestrial radio in the UK. Birmingham, UK recording studio XRP has been featuring contestants' music on its station and self-promoting heavily on the Facebook page to the point that members are listening to that station throughout the day.

Tooley understands that some of the voters work with bands in the running, and will purposely down-rate competing artists. He also understands that some of the contestants, who lose the contest may not stick around to buy the winning recording. "I believe there'll be 10,000 group members by the time we assault the charts. If half our members buy it, the song will get into the top 40." He hopes the musicians will be supportive in order to have this contest run again and--maybe--other people in different countries run their own contest to get onto the indie charts.

While Tooley agrees that all musicians would like to have their music at the top of the charts, he says, "My target number for this Facebook page is to have one of our bands hit “37” on the charts. After that, let the rest of the UK get them to the top. There's a band in the contest called Deferred Sucess, and they have a song that states the sentiment, 'Make a living.'  That is what this contest is about."
Posted by Anne Leighton at 10:00 PM