Grammy Nominated Jann Klose | indystyle.tv
Let me set this straight. Jann is on the GRAMMY-nominated album, HEALTHY FOOD FOR THOUGHT.

Email ThisBlogThis!Share to TwitterShare to FacebookShare to Pinterest
Labels: Grammy, IndyStyle, Jann Klose, Please Share This Link With Your Friends

THE YARDBIRDS OFFICIAL STATEMENT ON RUMORS OF ZEP FEST'S DEMISE

The Yardbirds: guitarist Chris Dreja, drummer Jim McCarty, bassist David Smale, singer Andy Mitchell, and guitarist Ben King have joined together to state, "We have heard numerous rumors that ZepFest, which is scheduled to be held at National Harbor, the weekend of May 27, 28, and 29, has been canceled. However, despite our repeated requests, the promoters have failed to confirm or deny the rumors.

"The band is ready and eager to perform under the terms of our fully-executed contract.  All that is needed for our performance to go forward is, among other things, receipt of our international flight tickets -- which we were supposed to receive on May 15, 2011. They were not received.

"We await word from the ZepFest promoters. Only they can confirm or deny whether the rumours of ZepFest's demise are true or untrue. We have been looking forward to playing the Festival and remain ready to do son. We call upon the ZepFest promoters to set the record straight, for performers and fans alike."

JANN KLOSE AND EMILY HURD TO PLAY SKOKIE THEATRE, MAY 20 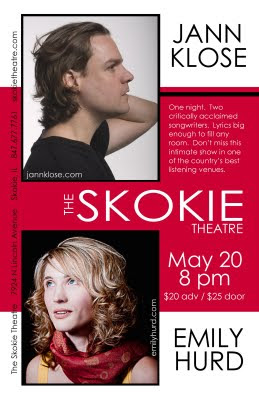 The show is being presented by Val's List; Valslist.com is a boutique music website that helps busy adults keep up with the music scene.

Emily and Jann will be raffling off their entire in-print catalogs to a lucky concert goer. The lucky winner will receive a copy of both artists' entire currently available body of work and an autographed copy of their most recent albums: Jann's REVERIE w/ SACRIFICE EP and Emily's DAYTIME FIREFLIES.

Jann is also appearing on area TV and radio. On Thursday overnight, he'll be appearing on Steve and Johnnie's radio show on WGN Radio. Friday at noon, he'll be on WGN TV, performing.

The Washington Post does not cover too many independent artists, but felt compelled to write about Jann, “Klose wins over the listener with his soaring voice, which may well be a staple of chamber pop for a long time to come.”

A citizen of the world, he's lived on three continents, making his home in the melting pot that is New York City. Before coming to the United States as an exchange student in Cleveland, Ohio, he lived in Germany, Kenya, and South Africa. As a singer/songwriter, his music reflects this lyrically, melodically, rhythmically and in his choice of eclectic instruments and musicians.

Jann's most recent recordings, REVERIE (2008) and SACRIFICE EP (2010), have earned him respect as a singer, musician, songwriter, and someone with a new and viable slant on the music business at a time when the industry threatens to collapse under its own weight. Jann's approach to fan sourcing of production money and concerts in areas as diverse as Chicago and Germany is creating a “cottage industry” out of popular music. REVERIE was made largely with fan support.

It also shows in the people who choose to work with him. Jann has worked live or in the studio with artists, including Pittsburgh favorites Rusted Root, pioneers like Pete Seeger and Les Paul, classic rockers Annie (Renaissance) Haslam, Roger (The Byrds) McGuinn, and major country stars like Rosanne Cash and Marty Stuart. WGN-Chicago Radio's Steve & Johnnie, Rock Hall inductee Joey Reynolds and Jethro Tull's Ian Anderson have all personally lent a helping hand in his career.

Jann's music has also been featured on the GRAMMY-nominated album, HEALTHY FOOD FOR THOUGHT, MTV's Cribs, the soundtrack to the Paul Sorvino film Dead Broke (Warner Bros). He's performed in touring companies of Broadway shows: The Who's Tommy, Jekyll & Hyde, and Jesus Christ Superstar. He also has released three albums and two EPs, which can be heard around the world, on over 140 FM stations and Sirius XM in the U.S., the BBC in England to Prambors Radio in Indonesia. In less than three months thousands have viewed (and reposted) Jann's remarkable video for DOING TIME, now featured on indoorDIRECT's Restaurant Entertainment Network and AOL/Spinner. Watch the video at www.youtube.com/jannklose. Jann is now an eligible artist for the 2011 New York Music Awards, listed right between "Carole King" and "Lady Gaga."

Time Out New York writes, “Jann Klose writes warm, hooky pop music.” The Advance Wire Service states: “The first thing that's totally unmistakable about Jann Klose is that voice - which is just light years beyond that of the typical singer-songwriter … a sound that is classy, distinctive and often irresistible.”

Emily Hurd is a Chicago-based songwriter and pianist with vocal chops that both Rick Kogan of WGN and Richard Milne of WXRT have likened to musical icon Janis Joplin. The wordsmith is well-respected for her cutting, intelligent lyrics and inimitable live showmanship. Like Russian-American piano-pop diva Regina Spektor, Hurd’s style is a raw mix of rock piano, soul singing, and roots songwriting. Hurd caught her break in 2005 when she joined forces with other greats from the Old Town School of Folk Music to create her first original album.  Eight albums later, her songs have won three international songwriting competitions, and she has shared stages with various legends, including Bettye Lavette and soul-queen Irma Thomas. Her web site is http://www.emilyhurd.com.

Jann Klose at the Lemon Grove, Youngstown, May 15

Determination is the most important factor in making things happen for your life. When I was in high school, and wasn't picked for All County Chorus, I went to my guidance counselor and asked him to talk with my choir teacher, and got in to All-County three years in a row. As a publicist, I call journalists instead of just sending e-mails. If I'm booking my artists, I send e-mails every month to venues, asking them to book my artist. I make follow-up calls. When we get gigs, I start calling and e-mailing my friends, asking them to come to shows; sooner or later, some of them make it. I have checklists of people to contact. Persistence makes a difference in achieving results. Talent only works a little, but speaking up for yourself will set you apart from everyone else. 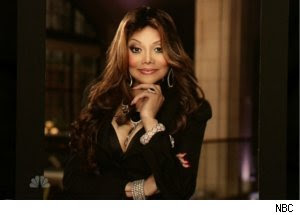 This is the story of LaToya Jackson and how she set a deserved precedence on TV's Celebrity Apprentice. She was asked back to the show after Donald Trump fired her the previous week. Why? Because she believed so much in her talent and abilities that she went back, and asked to be hired.

I know some regard her as "the untalented Jackson, standing in the shadow of Michael, Janet and the other Jacksons," just because she once posed in the buff for PLAYBOY. Even so, that particular issue of the magazine sold more than any others up to that point in history. LaToya is intriguing, eclectic, and bohemian, co-writing "Reggae Nights” with Amir-Salaam Bayyan (who has a big catalog of songs by name acts) for Jimmy Cliff, speaking out for gay rights, and has made albums, appeared on reality TV in the States and abroad. She even has a dessert named after her at West Hollywood's Millions of Milkshakes. She's adorable, soft-spoken, her music is sweet.

She's one hell of a role model to me--smart, creative, gentle, and diplomatic. I started noticing LaToya's quiet, but strong leadership abilities in this year's season. Twice, when she was a team leader, her team (ASAP) beat the men (BACKBONE). She has a very humane outlook, and able to tell which women were the manipulators, the followers, and who were good sports. If lawyer/TV personality/writer Star Jones wanted a team member eliminated, Star encouraged that person to be the team leader, "Well, it's time for your charity to make money." Then she'd encourage the rest of the team to argue with one another.

On Easter, April 24, ASAP and BACKBONE's assignment was to design advertising pages for one of Donald Trump's hotels. Star was in charge, and wanted LaToya and Nene Leakes (one of the Desperate Housewives of Atlanta) to run some errands. LaToya was uneasy about working with Nene, who had come down hard on LaToya previously, arguing the "untalented Jackson" had gotten by all these years because of her family name; Nene called her "old." On that Easter Sunday, Star suggested a "Come to Jesus" meeting to clear the cobwebs of hate. The two developed an appreciation for one another as they completed their project.

LaToya, who studies people and is a bit analytical, zoned in on Star's weaknesses that episode. It included taking charge of everything, working too much to the point that her product was weak. ASAP's presentation had each woman stating singular words to describe the luxury of Donald's hotel. After the presentation, LaToya had her own word to describe it, "corny."

Donald had to fire someone from Team ASAP. Of course the women pointed to LaToya as a "weak player." LaToya's voice was extra weak that day as she had laryngitis. Softly she explained that Star's work was poor because she was just doing too much. Star became more irate. Despite Donald's awareness that LaToya's talents and team leadership was equal, if not "sometimes greater than her team members," he decided that the women's team would be more formidable if the members got along. "Your team doesn't seem to like you, and they like Star. LaToya, you're fired.”

All of Donald's people seemed disappointed in the decision to the point he was even justifying himself to them. Still showing dignity at the elevator down, LaToya ignored Star, and hugged Nene, nodded to the elevator attendant, and left. In the limo ride, LaToya stated, "Truthfully, I think Mr. Trump made a mistake. I am not a weak player, and it's not a good feeling to be fired when you know you have something to offer."

Then she tweeted, "Most of you R as surprised & shocked as I was 4 getting fired. But keep N mind, I'm Joe Jackson's daughter, I was raised to NEVER give up!"

Then Nene gave Star notice, "I got my eye on you. You orchestrated all this, and you're willing to cut off your head to win." I don't know if Star was giving Nene lip service or sincere when she responded, "This is something I can learn from."

The following week, Star suggested Nene be a team leader, which made Nene believe that Star was throwing her under the bus.

Nene did some good work, and also noticed that the men's team brought in ASAP's former team member Niki Taylor to model for their presentation. She let all the women know and to be aware that she was working for the other team, "Don't tell her what's going on."

Of course Team BACKBONE beat ASAP. Nene complained that Star was indeed not playing fairly, and taking charge when she should not have.

Right before the firing debate portion of the show, Donald said he's doing something for the first time ever in the show's 11-year history, bringing back a team member. Everyone turned their heads, expecting to see Niki. Nope. Instead, my heroine, the accomplished, determined, and self-assured LaToya Jackson strutted into the meeting. She sat down with the BACKBONE men. She smiled. So did the men. Nene smiled. Star closed her eyes; maybe she was praying, maybe seeing red.

Donald said, "LaToya came to my office, and made a strong case as to why she should be allowed back, and I respected that. Never give up. People say, 'How do you become successful, Mr. Trump?' Never ever quit. Never ever give up."
Posted by Anne Leighton at 4:46 PM