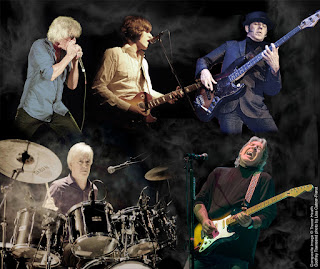 GODFREY TOWNSEND is the new guitarist for the Yardbirds. A favorite in the Classic Rock World, Godfrey has played with a range of greats from John Entwistle to Jack Bruce.

Godfrey’s plays guitar, keyboards, sings, and is the music director of countless live performers, most notably his own “Clapton is God-frey” show and the Happy Together tour.

A favorite in New York City’s Max’s Kansas City and the China Club scenes, Godfrey’s been the guy that got famous rockers on stage to jam with the bands.  After a stint in Las Vegas working with Mitch Ryder, Spencer Davis, and Joey Molland of Badfinger, he was recruited by John Entwistle of The Who, with whom he performed a half dozen tours, a studio album, and a live album. Godfrey went on to play with Alan Parsons, Todd Rundgren, Ann Wilson of Heart, Jack Bruce, Mark Farner, Christopher Cross, Flo and Eddie, and Dave Mason.
Since the Yardbirds’ birth from 1963 to 1968, and then its 2003 reformation, the group has been known for its incredible guitarists. In addition to Eric Clapton, Jeff Beck and Jimmy Page, plus rhythm guitarist/bassist Chris Dreja have contributed to the band’s history.
Jim McCarty continues to lead this innovative British rock band that provides the crucial link between British R&B, Psychedelic Rock, and Heavy Metal, while pioneering the use of innovations like fuzztone, feedback and distortion. The drummer/singer/songwriter is responsible for its haunting sound.
The Yardbirds are exclusively represented TCI (Talent Consultants International) for booking concerts. Stay tuned for an announcement soon of U.S. Tour dates for this November.
Goldmine Magazine stated, “the band’s hallmark of top-notch musicianship remains. There are no passengers in this band.”
theyardbirds.com
yardbirds.us

Posted by Anne Leighton at 4:14 AM

I work quite a bit with music from the African continent, both as a newly published songwriter, and in helping artists from there, most notably Sharon Katz, Wouter Kellerman, Jann Klose, Shawn Phillips, Alex Boye’.  I’ve been a cheerleader for many more!
From South Africa Sharon Katz made CNN News in 1993 as she created and led South Africa’s first, 500-voice multiracial choir. This became a 2015 award-winning documentary, WHEN VOICES MEET, selected for 25 film festivals and shown in over 50 countries, premiering in South Africa. (www.WhenVoicesMeet.com). Sharon Katz & the Peace Train have 5 other albums, and appear on the Rainforest benefit album, “Carnival!” alongside of Sting, Elton John, Madonna, Johnny Clegg…

This is Peace Train,” which appears on her 2002 Grammy-nominated album, “Imbizo.”

I want to turn you on to the holiday song NEVER TAKE LOVE FOR GRANTED by Dan Berggren.
“Remember it’s the thought that counts!”

Ilona will be performing at the Cutting Room, New York City on August 1.
She has two Nashville gigs: August 5 at the Bluebird, and August 7 at the Basement.

Ilona’s music, to me, is a cross between Pink’s and Taylor Swift’s, and she has grit with energetic pop arrangements.

Her song LOVE IS STUPID is upbeat power pop about tossing and turning late at night because she’s missing her ex. (lyric below)

Elliott Murphy; OPEN CITY:  Bluesy, ethereal guitar, Elliott's voice could be described as a cross between Tom Waits & Petty and Bruce Springsteen. This November is going to be an empowering time for this rock troubadour that the universe has been giving back to.  Soon I'll have complete info. One confirmation is Elliott is playing New York City's Rockwood on November 10.

Rebecca Loebe is a member of the Austin, TX-based trio, NOBODY’S GIRL, who were at the top of the list in this month’s ROLLING STONE for their country-pop cover of Blondie’s CALL ME:   https://www.rollingstone.com/music/music-country/10-best-country-and-americana-songs-of-the-week-cam-kenny-chesney-and-more-701812/

This is Rebecca’s song, LIE, from her top ten European album, BLINK.

More
Rachael Sage’s new album, MYOPIA, has yielded a finalist in the IAMA (International Acoustic Music Awards). The song is ”Tomorrow" is Rachael’s first co-write ever, with James Mastro, who is in her band, and was a member of the classic band, The Bongos.  ”People are crazy, but you’re not crazy, and neither am I”

Posted by Anne Leighton at 5:51 PM