Very active summer with new jamband fusion music coming in from Joe Olnick, a TBA film placement with my music director Roberta Piket.  Phoebe Legere playing the Congres Mondial Acadien, in New Brunswick, Nova Scotia's Coal Fuel Festival.  She is finishing a collaboration with one of Canada's greatest poets. Gary Lucas performs at Vancouver's Chutzpah Cultural Film Festival this October. The Movie, “One Little Finger” premieres at the Laemmle Monica Film Center on August 16, at 7 PM. The event starts at 5:30 PM with a Red Carpet Opening.

We have more holiday music, including some Dean Friedman songs for Rosh Hashanah and Hanukah... or is it Chanukah?

IT'S CHRISTMAS TIME by Jon Mullane: the joys of Christmas, and getting ready for it.  Sounds like Maroon 5. Tempo exactly like BandAid’s “Do They Know It’s Christmastime…”

REINER THE RHINESTONE REINDEER Phoebe Legere
LGBTQ-friendly about a well-dressed reindeer that lit up the sky with all his bling! bling! bling!

SOME SAY CHANUKAH Dean Friedman: Live Recording, a singalong with kids, that includes laughter Ha-Ha-Ha-Hanukah AND singing comments on how “Cha-NU-Kah” could be pronounced!  They sing about other seasonal customs in this fun song.

WARM, LOVIN’ CHRISTMASTIME Rob Bonfiglio  Bouncy Brian Wilson-y, from one of Brian AND Carnie Wilson’s long time musical partners.  In fact, Carnie and Rob have recorded this, and so have Wilson Phillips! Imagery of mistletoe and writing our names in the snow!

If you are looking for jamband /fusion substitutes like the Dixie Dregs, Medeski Martin & Wood, and Mastersounds, ask me for a Joe Olnick zipfile.

Posted by Anne Leighton at 2:09 AM

Listen Only On YouTube
New Album Everywhere on September 6 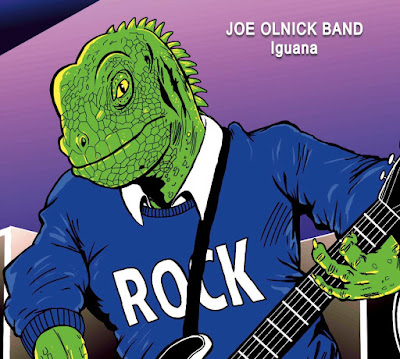 STICKY FLOOR NIGHTCLUB, the first song from Joe Olnick’s 7th album, IGUANA, is out on YouTube.  The instrumental’s funky rock vibe features Joe’s soaring guitar and dirty grooves with a tight rhythm section made up of bassist Jamie Aston and drummer Stew Bradley. The song's ending section gives way to a rowdy crowd in a club, giving a cinematic feel to the musical story unfolding.


Joe is self-releasing IGUANA on September 6. Based in the fusion genre, IGUANA has rock influences, from Talking Heads to Pink Floyd to REM to the Allman Brothers. Comic book artist Ron Good (of the horror series, God-Awful Comics) designed the album art about the story of a misunderstood Iguana named Don, who eventually—after lots of struggles ultimately gets his own hot rock to rest upon!  “There are parallels of Don’s life with my own career,” Joe says. “I’m an artist producing original instrumental work, so it’s a struggle at times to get my music out there.” “Meet” Don in the Youtube video!


Joe’s music has a rocking vibe of “avant-jam” and fusion like Medeski, Martin & Wood and New Mastersounds.  His previous album DOWNTOWN received unique feedback from a range of journalists.  MUSIC STREET JOURNAL called his music “classy.”  BURNED OUT BORDERS proclaimed his music great for, “Any fans of hard-hitting, rock-leaned instrumental music with a progressive, experimental backbone.”


In addition to guitar, Joe played sax and bass, plus worked as a recording engineer. In 2012, he released his first CD, and continued self-producing with albums from ambient to jazz/rock genres.

Posted by Anne Leighton at 5:24 AM