ELLIOTT MURPHY: BACK IN THE U.S.A. FOR A WEST COAST TOUR, WITH OPENER JANN KLOSE

Elliott Murphy first came to prominence 35 years ago with the release of the now-more-relevant-than-ever album, AQUASHOW. That, along with NIGHT LIGHTS, LOST GENERATION, and JUST A STORY FROM AMERICA were played on mainstream radio throughout the United States. These albums were also picked up internationally, especially in Japan and Europe, where Elliott has found international stardom. 19 years ago he moved to France. He last played the United States in 2000 at New York City's Bottom Line, and his last west coast dates were in 1996.

Elliott has released 30 albums, his latest is NOTES FROM THE UNDERGROUND, which has received 5 stars on the prestigious music site, ALL MUSIC.COM. Some of the musicians who've collaborated with Elliott on his recordings are Bruce Springsteen, Billy Joel, Phil Collins, and the Rolling Stones' Mick Taylor. Elliott was also honored with a monumental exposition, LAST OF THE ROCK STARS-RETROSPECTIVE at Paris' Town Hall, and has been cited in literature in the work, SAVAGE DETECTIVES by the late Roberto Bolano, who now has a best-seller book called, 2666.

Elliott, who is already played on Sirius-XM's the LOFT, will be the subject of a story on an upcoming Bob Edwards' show on the satellite station, and he will be releasing his 31st album this March 16, his 60th birthday. And this spring, he'll be acting in the French movie "La Ligne Blanche" out in spring 2009.

Opening all dates will be Jann Klose, whose new album REVERIE is an independent release that has been picked up by 90 AAA radio stations in North America, a variety of folk and jazz stations, some European stations including regional BBCs and Radio Caroline, and played on a mixture of formats including talk, classic rock morning and "Acoustic Sunrise"-styled shows, and Sirius-XM's The Loft. KMMT-Mammoth Lakes, a top 40/modern rock station, has also picked up on Jann's album. Born in Germany, raised in Kenya and South Africa, Jann has collaborated on stage with Renaissance's Annie Haslam, songwriters Rosanne Cash, Marty Stuart, and Roger McGuinn.

The tour has received praise in every city it's played so far from Boston, MA to Larchmont, NY. THE WASHINGTON POST'S Christopher Porter notes, "Murphy engaged his campfire crowd with direct eye contact, making the evening's intimacy even more intense. His textured voice -- as with his songwriting, it's equal parts Bob Dylan, Lou Reed and Bruce Springsteen -- also exhibited tonal strength and beauty."

The Schenectady Gazette's Brian McElhiney writes, "Murphy gives hungry cadre of stateside fans what they came for." Indeed the fans also are receiving more than their money's worth. One Boston fan blogged, "Murphy sang with the resilience of a survivor who will always continue to grow and change. His performance let us in on a taste of what his journey has been like. I know I felt changed by it. Murphy's show was a true rock 'n' roll baptism." A female working in Washington, DC media had never heard of either artist, and her boyfriend was curious about the venue they played in. She said, "This was the most memorable night of rock & roll I've ever had. Both artists are great."

April 14-26: The next tour. Dates will include Buffalo, Cleveland, Hoboken, Chicago....

Other dates for Elliott are in Europe, including his special 60th birthday show on March 14 at New Morning, in http://www.blogger.com/img/blank.gifParis, France. Please visit http://www.myspace.com/elliottmurphy

Bruce Kulick
In addition to Elliott and Jann at NAMM, other artists are scheduled to appear.
Grand Funk Railroad's Bruce Kulick will be hanging at NAMM on Thursday the 15th of January. His web site is http://www.kulick.net

Alex Skolnick will be there for all three days, rotating between Peavey Amps, Rockhouse Instruction, Yamaha Acoustics and Heritage Guitars. Before and after NAMM, Alex is touring the West coast between San Diego and San Francisco. Visit http://www.alexskolnick.com.

Carmine Appice will be hanging at the DDRUM and Calzone booths.

On Thursday, Jan. 15 at 8 PM and 11:30 PM, Hoshino USA celebrates Simon's 30th Anniversary in the Anaheim Marriott Ballroom, as he and friends will play material from his full career: Judas Priest, MSG, Stanley Clarke, Jeff Beck, Pete Townsend, 801, and Toto. He'll also be at the Tama booth throughout the week.

Jeff Berlin will join what's called Muriel Anderson's All-Star Guitar Night on January 17 at 7:30 PM in the Hilton Anaheim Ballroom. Stu Hamm and Danny Gottlieb are also on the bill.
Posted by Anne Leighton at 10:49 PM

Electric violinist Joe Deninzon has one last Stratospheerius show before he and his classical violinist wife Yulia Ziskel discover the creative world of parenthood. The Deninzons are due a son late January/early February. So while "junior" is growing up, Joe will be writing a book on gear for string instruments and finishing up the next Stratospheerius album, plus gigging with Metro Strings and other pro gigs in the New York City/New Jersey area. 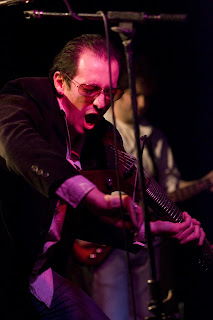 Metro Strings, which includes Brazz Tree's Mazz Swift-Camlet on violin, cellist David Gotay and viola player Hiroko Takuchi, will be performing at Drom, 85 Avenue A (between 5th and 6th Streets), in New York City, at 7:15 on January 12. The group combines vocal and instrumental rock, hip hop, jazz, funk, and electronic music. There are some recordings of covers at myspace.com/metrostrings.

And for fun, visit this link to hear Joe jamming on "If I Were a Rich Man" from FIDDLER ON THE ROOF. I think it is the way the song should be performed, especially in today's economy. How about you?

Email ThisBlogThis!Share to TwitterShare to FacebookShare to Pinterest
Labels: " David Gotay, "If I Were a Rich Man, Fiddler on the Roof, Hiroko Takuchi, Joe Deninzon, Mazz Swift-Camlet, New York City

over the NEW Rainbow, singing together

My friend Lisa Walker is publicizing the new Rainbow, which features Ritchie Blackmore's son, Jurgen "JR" Blackmore on guitar, Joe Lynn Turner on vocals, Tony Carey on keys, Bobby Rondinelli on drums, and Greg Smith on bass. How does the younger Blackmore feel about sharing the stage with musicians he grew up watching perform in concert with his legendary father? "I have not worked with them," says Blackmore, "But, I have admired them since I was young. That makes them like brothers.”
Contact: LisaWalker@ToTheMax1.com

And finally, my radio teacher Dan Berggren turned me on to this amazing story about Brian Eno telling NPR the importance of family singing together, because there are physical and civilizational benefits in singing, dancing, and camping. http://www.npr.org/templates/story/story.php?storyId=97320958

Eno says, " if I were asked to redesign the British educational system, I would start by insisting that group singing become a central part of the daily routine. I believe it builds character and, more than anything else, encourages a taste for co-operation with others. This seems to be about the most important thing a school could do for you."
Posted by Anne Leighton at 10:41 PM