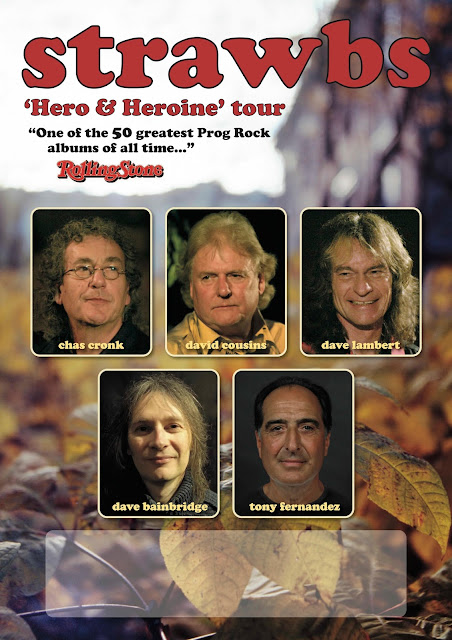 In June 2015, ROLLING STONE named the Strawbs’ HERO AND HEROINE one of the 50 Greatest Prog albums of all time. Insightful writer Ryan Reed noted HERO AND HEROINE, as the bands “heaviest, most symphonic album,” and cited leader Dave Cousins’ “ambitious prose” as some of the album’s power.

Inspired by this new intention, ROSFest invited the Strawbs to headline its Festival on Friday, May 6 (the fest runs May 6-8), and the band’s booked a tour around it. North America has an amazing relationship with Strawbs, as the group has sold more records in the USA and Canada than anywhere. In the USA the band had seven consecutive albums in the Billboard Top 200.

Dave Cousins, founder member, has been described by All Music Guide as: “the most talented Dylan influenced songwriter to come out of England.” He recently released his long awaited, and critically acclaimed, autobiography Exorcising Ghosts: Strawbs and Other Lives. It was listed by ALLMUSICGUIDE writer Richie Unterberger in his “Top 10 of 2014 rock books.”

Strawbs are often mentioned in the same breath as progressive rock bands like Yes, King Crimson, and The Moody Blues. It is well-documented that Rick Wakeman left Strawbs for Yes. Rick was followed by Blue Weaver - who left Strawbs to join the Bee Gees, John Hawken – from the original Renaissance, Don Airey - now with Deep Purple, Adam Wakeman, and Oliver Wakeman, who, like his father, left Strawbs to join Yes!

Strawbs emerged out of the British Folk Movement of the mid-1960s, starting life as the Strawberry Hill Boys playing bluegrass. They moved into the mainstream in 1967 by making the first Strawbs album, All Our Own Work, with Sandy Denny, a full year before she recorded her first album with Fairport Convention. The album attracted the attention of A&M Records in Hollywood who signed Strawbs as the first British band on the label.

Strawbs albums Hero & Heroine, Bursting At The Seams, Ghosts, and Grave New World define the music. The current Strawbs line-up comprises Dave Cousins, lead guitarist Dave Lambert, bass player Chas Cronk, and drummer Tony Fernandez, who has been in the Strawbs for the last 10 years and was first in the band in the 1970s (and Rick Wakeman’s drummer for 35 years). They are joined by keyboard virtuoso Dave Bainbridge of Iona, a band whose mystical blend of rock, folk, Celtic and ambient music has endeared them to audiences across Europe and North America for the last 25 years.


“Like a Ray Davies steeped in Arthurian folklore and rustic reverie, David Cousins’ visionary talents are to the fore conjuring up a mythical canvas of Albion awakening.” —Uncut – September 2008

“Tell me what you see in me revealed it to be a virtual blueprint for the harmonies and arrangements of the entire Styx catalogue. Oh how she changed, similarly, sounded like a vocal model for latter day bands like Fleet Foxes.” —Schenectady Times Union – September 2010

“The songwriting was phenomenal, and the way the trio embellished sublime melodies with supreme harmonies and incredible instrumentation made their performance unforgettable. In fact, I repeatedly thought “music just isn’t this good anymore”.” — Philadelphia Examiner – September 2011

“Dave Cousins shows himself as a brilliant and original songwriter….”—Classic Rock – September 2012

“From beginning to end, this veteran group put to shame bands a third their age with the majesty of their arrangements, the craftsmanship of their tunes and lyrics, which remain as socially relevant as they were decades ago. The band’s vocal harmonies at this stage of their career are tighter and soar higher than anything Crosby, Stills and Nash ever did.” — New York Music Daily – September 2012

“Spellbinding guitar interplay, with countless alternative tunings to create the drone effect so evident in The Strawbs’ music, was the hallmark of an evening which provided far more than a dose of nostalgia. Whether you lean towards the folk or the prog it matters little . . . plugged in or not, the Strawbs are the juiciest, tastiest fruit you’re ever likely to hear.” — Swindon Echo – October 2014

Posted by Anne Leighton at 2:31 AM