The Multi-talented Dr. Frank Ercoli and his sax join Tower of Power on stage at the Palm Springs Smooth Jazz Festival, May 19. 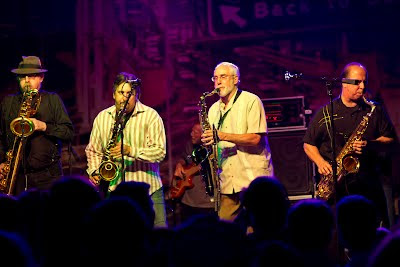 Dr. Frank Ercoli goes back with Tower of Power to the days he played sax and keyboards with the West Coast rock band, Fertile Earth. He also runs the Palm Springs Smooth Jazz Festival where Tower of Power played May 19. That was a benefit for Dr. Ercoli's Hanson House, “a community-supported facility with low or no cost services whose dedicated staff and volunteers are committed to making available a safe, clean and caring temporary HOME AWAY FROM HOME for the families of the critically ill and injured.”

Posted by Anne Leighton at 9:50 PM


Icons of English Progressive Rock, Van der Graaf Generator, return to New York City on June 30 to perform at The Concert Hall. The group features three of the original touring members and blew away fans when they performed in 2009 (read NYT review). Their signature sound is shaped by Peter Hammill’s distinctive & dynamic voice, Hugh Banton’s thick chordal keyboard & bass parts and Guy Evans' rolling jazz-rock-like drumming. Formed in Manchester 1967, VDGG first broke out on BBC Radio One and performed at such prestigious venues as London's Royal Albert Hall and Paris’ Olympia. Since their reunion in 2006 as a trio, the group has remained active and produced new material as well as reworked versions of earlier songs. They have toured worldwide for the past six years and on the strength of their newest release, A Grounding in Numbers, Van der Graaf Generator will storm North America with a series of dates that also includes NearFest (6/12) and Montreal Jazz Festival (7/3). 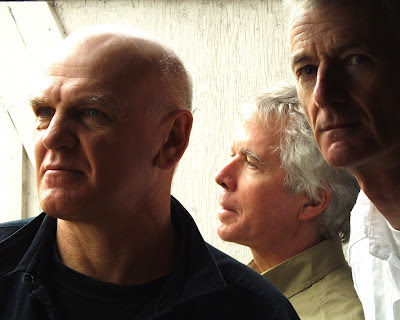 Posted by Anne Leighton at 9:51 PM

Singer/Songwriter/Pianist Performs in Annapolis on May 18, Woodstock on May 19, and New York City on the 21

Vonda Shepard and her piano will be performing three east coast dates this May 18, 19 and 21.

May 19 brings Vonda to the Bearsville Theater, 291 Tinker Street in Woodstock, at 9 PM. The web site is http://www.bearsvilletheater.com

Vonda is touring in support of her new album, SOLO, which features just Vonda and her piano. The songs are favorites from Vonda's albums through the years, "Lose My Way," "Don't Cry Ilene," "The Sunset Marquis," "Soothe Me," and "I Know Better," as well as some favorite cover ballads--"Walk Away Renee" and "You Belong To Me." This show features Vonda Shepard (piano), James Ralston (guitar) and Jim Hanson (bass). The SOLO tour provides the perfect opportunity to get to know Vonda's earthy and accessible style, and to get a glimpse of her intimate interaction with her audience.

The Fans have known, but now the media is falling in love with Vonda one person at a time, and we'd love for you to join the fold. Just recently Vonda was featured on SIRIUS XM's DAVID ESSEL ALIVE, who said "She was insightful, vulnerable, inspirational-- everything you could want from a top guest... her impact on the lives of my listeners will be long lasting. And yes, we want her back for more. "

Tood Goodbout from contemporary pop web site, myjoog.com, says, "I never really bothered to listen to Vonda Shepard. Maybe it was an anti-pop culture phase from her "Ally McBeal" fame. Maybe it was being tied to the blues and roots rock. Whatever the reason, that was a huge mistake. Recently I was sent a copy of her latest CD, SOLO - just Shepard and her piano - and I was completely overwhelmed."

LET IT ROCK writes, "Her new album...requires all your attention, and the late night romanticism is a rarity nowadays. Recorded live in the studio and produced by Mitchell Froom whose credits include Paul McCartney, SOLO is as sensual and intimate as it gets."

With over 12 million album sales to her name, two Golden Globes, two Emmy Awards, two Screen Actor's Guild Awards as well as the Billboard prize for selling the most television soundtrack records in history for the hit TV series “Ally McBeal,” Vonda is a world-renowned artist who continues to delight audiences with her magnanimous live performances. She dedicates songs, tells stories, and-at the same time-projects dynamic charisma and intimacy with her audience.

Over the past few years Vonda has opened for Sugarland, who once opened for her, and she has performed live with the Indigo Girls and The Funk Brothers (a highlight of her life), and has shared the stage at music festivals with Sting, The Eurythmics, Santana, and Matchbox 20. She is also known for "Can't We Try," her duet with Dan Hill, which hit number 6 in 1987. She played keyboards and sang with Rickie Lee Jones, Al Jarreau, and Jackson Browne, eventually opening for Browne in the U.S. and Asia.

Fans all over the world have been listening to Vonda for years, and there's a reason why SOLO is getting the attention of critics and fans alike. Listen, and let us know what you think. 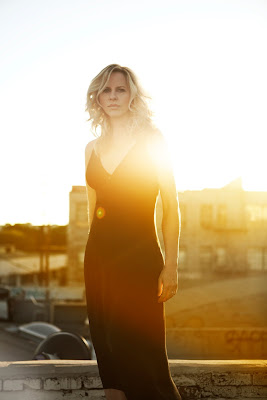 Welcoming State Lawmakers Back to Raleigh, North Carolina, with an Unforgettable Protest

First-ever Pots & Spoons Protest of our out-of-control General Assembly will be one to remember in Raleigh at 10 A.M., Wednesday, May 16th

Doing this protest was my stepmother, Estelle Leighton's idea. An amazing woman, she has always fought "city hall," and made this world a much better place!


Raleigh, N.C.– When lawmakers return to town on Wednesday, May 16, North Carolinians outraged and disappointed at actions taken by our General Assembly to enrich the few at the expense of the rest will converge on Bicentennial Mall at 10 A.M. for a cacerolazo – a Pots & Spoons Protest – the first-of-its-kind protest of our out-of-control state legislature.

The Pots & Spoons Protest comes at a critical time for North Carolina.  As corporate lobbyists and the right-wing “crazy train” line up to be heard inside the legislative building, we will drown them out with a noise only We the People can muster!  Each of us armed with only a pot, a spoon, and a determination not to be ignored, we will stand across the street from the People’s House – our house – and bang our empty pots non-stop for 15 minutes.

Despite election results that disappointed hundreds of thousands of North Carolina voters, we are not going to let our out-of-control legislature off the hook.  We will make May 16, 2012 a day to remember in the ongoing struggle for economic and social justice in our state.

What: Pots & Spoons Protest of our Out-of-Control legislature
When: Wednesday, May 16 at 10 A.M.
Where: Bicentennial Mall (across from the legislative building),16 W. Jones St.,Raleigh,NC
Why: Let’s welcome state lawmakers back to Raleigh with a sound they can’t ignore.
Who: AFL-CIO, MoveOn.org, Action NC, Triangle Jobs with Justice, and others


Press availability:
Before the protest begins, MaryBe McMillan and James Andrews of the NC State AFL-CIO will take questions from reporters; rally participants will be available to share what motivated them to participate in such a novel protest.

Photo ops:
1. A hundred or more North Carolinians from all walks of life, assembled between the Capitol and the legislative building, united in their opposition to out-of-control lawmakers using the state against the people, each banging a pot or pan they brought from home non-stop for 15 minutes.
2. Call to action by MaryBe McMillan (2-5 minutes).

Unique recording opportunity:
The sound of a cacerolazo is unmistakable and unforgettable.  The 15-minute Pots & Spoons Protest on May 16 will be unlike anything most radio and television viewers have ever heard or witnessed.  It will be unlike any protest ever held in our state capital.

About the cacerolazo:
A form of popular protest that originated in Latin America which consists of a group of people creating noise by banging pots, pans, and other utensils to call for attention.  In cacerolazos from Chile and Argentina to Iceland, Ireland, Greece, and even Syria, people have come together to challenge power and affect change. It is time to bring the spirit of the cacerolazo to North Carolina, where our out-of-control state legislature has busied itself since the 2010 election with catering to corporate interests and right-wing ideologues, gutting funding for public education, endangering women’s health care, putting the rights of unmarried couples up for popular vote, and attempting to lock some groups of voters out of the political process. ###

Video: When lawmakers return, let’s welcome them back!

Posted by Anne Leighton at 9:34 PM

Joe Deninzon & Stratospheerius Celebrate the Release of THE NEXT WORLD, at the Shrine, in Harlem, May 24 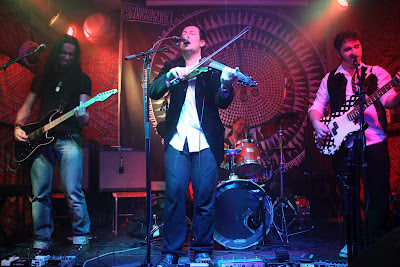 Stratospheerius will be releasing its new album, THE NEXT WORLD at The Shrine, 2271 Adam Clayton Powell Jr. Blvd., at 135th Street, in New York City, on May 24, at 10 PM. Admission is free, and there will be FREE Stratospheerius gifts, prizes, and free food catered by the Shrine!

The band will play THE NEXT WORLD, and video tape the show.

Stratospheerius' new album THE NEXT WORLD is on Steve Vai's Digital Nations and Joe's imprint D-Zone Entertainment. Generally Steve signs metal/hard rock acts, but in addition to the great singing/songwriting on this album, Joe shreds on electric violin.  Stratospheerius generally shares bills or opens for bands from fusion, jam, progressive, rock, and hard rock.  Powderfinger radio promotions will be working the album to AAA radio this summer. THE NEXT WORLD features the fiery "Gods," an energetic power clash in "The Missing Link" and the glorious "Release." The album's wide ranging instrumentals are the whiplash-inducing "Road Rage," the soulful "Ballad for Ding Bang," and the post-apocolyptic "Fleshbot." Joe & his band bend genres in the electronic/ska-inspired "Tech Support," the country rock ballad "Climbing," and the bluesy "The House Always Wins."

Already THE NEXT WORLD is gaining some media attention. BLOGCRITICS writes, "If Jeff Beck had been a fiddlemaster with a streak of humor." Binghamton's PRESS & SUN BULLETIN calls the group "innovative."

The band is on the soundtrack of the recent Will Ferrell/Adam McKay-produced movie, VIRGINITY HIT.

Joe has written the book on Electric Violin--literally; Mel Bay books has released his "PLUGGING IN: A Guide To Gear and New Techniques for the 21st Century Violinist" at NAMM. Often called "The Jimi Hendrix of the Electric Violin," his innovative performances on the electric seven-string violin and his compositions blend rock, funk, jazz, classical, and Eastern European Gypsy influences. While leading Stratospheerius since 2001, Joe has worked with Bruce Springsteen, Sheryl Crow, Les Paul, Phoebe Snow, and Ritchie Blackmore, and President Clinton. He can be heard on over 100 recordings and jingles as a violinist and string arranger.


Joe Deninzon & Stratospheerius "One Foot In The Next World" Live

Posted by Anne Leighton at 2:37 AM 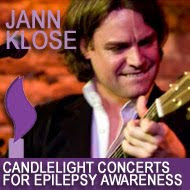 
Jann Klose, heard on the Grammy-nominated ‘Healthy Food for Thought” compilation and MTV Cribs, and currently in the studio with David Bendeth (Papa Roach, Paramore, Bruce Hornsby), will be performing at the Candlelight Concerts For Epilepsy Awareness, in Pennington, NJ on May 19, at 8 PM

Writes the Washington Post, "Klose wins over the listener with his soaring voice, which may well be a staple of chamber pop for a long time to come.”

The Candlelight Concert is a unique and fundraising house concert series to raise awareness and spread the facts about epilepsy. Currently, the house concert series is in Pennington NJ and open to a very limited number of guests (40 per show.) The shows are also streamed online using StageIt.com, with proceeds going to various epilepsy charities.

Posted by Anne Leighton at 3:34 AM