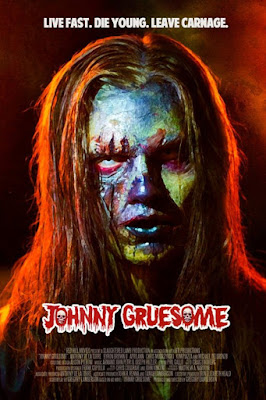 Johnny Gruesome tells the story of a murdered high school student who returns from the grave as a vengeful monster. Petri and Rozler signed on to compose the score following their work in the same capacity on Killer Rack, and enlisted Takac to collaborate on "Dyin' Tonight."

"Johnny Gruesome is a rock 'n roll monster, and we needed a score that reflected that vibe," says Lamberson. "Armand, Joe and Robby are among the most talented music pros in Western New York, and since Johnny Gruesome is a Buffalo production, it's fantastic to have them involved in such instrumental roles. Horror fans are going to love this score, it's full and lush, not just synth.

An independent record producer and manager, Petri has worked with the Goo Goo Dolls, 10,000 Maniacs, and Sixpense None the Richer. Rozler is a renowned keyboardist and studio musician who has written string arrangements for Manowar and 10,000 Maniacs.

In addition to his Goo Goo Dolls role, bassist and vocalist Takac owns the record label Good Charamel Records and serves as president of the nonprofit Music Is Art Festival. All three have been inducted into the Buffalo Music Hall of Fame.

Mary Ramsey of both 10,000 Maniacs and John & Mary fame played viola and violin on the score, accomplished conductor Bryan Eckenrode played cello, and Virginia Croft, honored by Miramax Films with their "Music of the Heart" award, plays violin.

The soundtrack for the film also includes songs created by Dean Italiano and Giasone Italiano for the "Gruesome" rock CD released 10 years ago to promote the novel. The film’s co-star Aprilann, who portrays Johnny’s girlfriend Karen, performed the song, “Not You” for the soundtrack.

Johnny Gruesome is now wrapping post-production, and Lamberson will soon seek distribution. "Dyin' Tonight" will be available on iTunes before the film is released. The "Gruesome" CD by the Italianos is currently available on Amazon and iTunes. 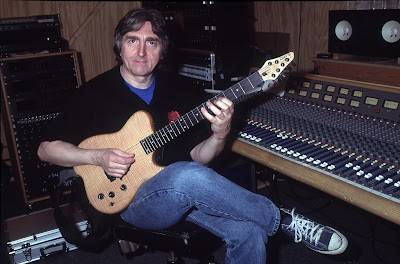 Music Industry Friends Share Appreciation for Allan Holdsworth
Hello to my friends and colleagues in music. Along with Manifesto Records’ Dan Perloff, it’s been a pleasure to work Allan and his two new reissues: the box set:“The Man Who Changed Guitar Forever” which has all of Allan’s solo albums, and “Eidolon,” a 2 CD collection that Allan chose the songs for.
Between April 4 and April 10, Allan played 3 SOLD OUT shows in Southern California. He left us on a high chord!
A tech-savvy man of 71, he taught me to have fun with my cellphone, as he always requested that we text important notes to him. No email, just texting! He got me using emojis like the British flag, pictures of snowmen, and broken hearts. Allan’s favorite was a smiley guy that gritted its teeth.
I will be making MP3s available for radio programmers, music supervisors, and other accredited journalists—please email me if you’re interested.
This note is a scrapbook of remembrances from friends of Allan’s. Chris Hoard’s two paragraph recollection will give biographical insight and personal remembrances. I’m also including links to video, writing, and a podcast interview. In the next few weeks there will be a variety of articles on Allan—interviews conducted by Bill Kopp for PROG magazine and Joe Lalaina for GUITAR WORLD.
One of the fans posted on his Facebook page, “I swear he made some chords up.”
Robben Ford dubbed Allan “the John Coltrane of the guitar.”
This instructional video, put out by Alfred Music in the 1980s, shows Allan explaining how he comes up with his chords: https://www.youtube.com/watch?v=7h-MdM7JCGs
I’ve had the pleasure of knowing a number of industry people that have worked intently with Allan through the years: Manifesto Records’ Dan Perloff, manager Leonardo Pavkovic, music writer/researcher/Allan friend Chris Hoard, guitar maker Jim Reiske, photographer Glen Laferman. Under their thoughts are links to some of my favorite interviews that Allan did in the past few months. Eric Harabadian was the last person that interviewed Allan.


NOTES FROM FRIENDS AND THE MEDIA
“I feel very fortunate to have been the producer on the recent Allan Holdsworth reissue projects for Manifesto Records. Getting to know Allan over the last year and putting together something for him that will honor his great legacy was a privilege. Allan hadn’t played out in a while, but had recently done four sold out shows in Southern California, that’s what I call going out on a high note!"
-Dan Perloff, Manifesto Records,

"There is no greater measure of a life well-lived than the amount of people he had impacted, and by that measure the artist Allan Holdsworth lived a very good life. This man took a plank of wood, a few strings and some wires and transformed people's lives in a way that few others have. The ultimate genius of the rarest kind. So much history with Allan."
–Leonardo Pavkovic, MoonJune Music (Managed Allan Holdsworth between 2001-2016)

“Allan is a celebrated musical legend among so many great contemporaries, and among today’s younger generation of master musicians whom he performed and collaborated up until his sudden passing.  So many of the most revered musicians of the half-century consider Allan Holdsworth to be one music’s leading musical innovators and most original voices. Those close to him knew him as a humble genius with a wonderful sense of humor, and a generous and kind soul at his core.  Allan’s many collaborations are now the stuff of legend, as were his friendships, collaborations, touring performances and recordings with so many jazz and rock luminaries, among them the late Tony Williams, Jack Bruce, Gordon Beck, and John Wetton among others.
“Allan’s career began as a London-based journeyman sideman who captivated the attention and imagination of guitarists world over was unparalleled in modern times—he recorded and toured with Soft Machine, U.K., Bill Bruford, Jean-Luc Ponty, Gong, Stanley Clarke, and performed as a member of HoBoLeMa, the improvisatory “supergroup” ensemble which last performed in 2014; it was formed by Frank Zappa/Jeff Beck drummer Terry Bozzio, with drummer Pat Mastelotto, and bassist/stick player Tony Levin.  In 1980 Holdsworth launched a successful solo career with drummer/keyboardist Gary Husband, which began a succession of self-produced studio albums band leader and principal composer featuring his singular “Holdsworthian” conception.  Allan had just released his solo career retrospective 12-CD box set of 11 studio albums, and one live disc, aptly titled The Man Who Changed Guitar Forever.  Holdsworth strongly resisted the proposed name, but eventually allowed it, having been lobbied by many friends and fellow musicians that it was indeed an accurate view of how his fellow musicians and fans viewed his contribution to music and the evolution of his instrument.”
-Chris Hoard

“There is an indisputable truth suspended in all the music Allan created. The burden of being a mortal, saddled with this answer to a universe of creativity, weighed heavily on Allan. He was the temporary flame keeper, like Parker and Coltrane before him. His musical genius was searing. I will miss his humbleness and hospitality. Seldom has a man walked so unassuming a walk and influenced so many fellow human beings. Rest in Peace Maestro.”
—singer/songwriter Jim Reiske built several guitars for Allan, “We have been friends since mid 1980s. He was like a brother.”

“It is with a heavy heart that I share the loss of my friend and client, Allan Holdsworth. I have been Allan’s photographer nearly 33 years, and just saw him live last week. His box set was just released. Condolences to his family and circle of friends. He and Gary Moore are drinking with God. Goodbye my friend, and thank you for your music and friendship.”
-Glen Laferman, photographer

Legere is celebrating the release and Top ten success on the Alternate Roots chart, plus Top 30 on Roots and Americana Radio of her new album, HEART OF LOVE. The Hamptons, NY will be playing host to Fourth of July with Phoebe this summer. Look for events leading up to a big party and concert on July 4 at Stephen Talkhouse. She recently signed with Jeff Miller for booking her Cajun Jamboree in PACs and Casinos. Look for an announcement for a new record deal for an all-French album, something this treasure of an artist has always wanted to do. Visit www.PhoebeLegere.com.

Deninzon is finishing up a new album. GUILTY OF INNOCENCE, with his band Stratospheerius, and special guests Rave Tesar (keyboardist, Renaissance) and Alex Skolnick (guitarist) for release this fall. Look for an announcement of him being signed to an great prog label early May. They will be playing Chicago’s ProgtoberFest this fall. Enjoy photos and stories of Joe’s work at www.joedeninzon.com/category/news/. www.joedeninzon.com/category/news/.

Mike is writing new songs with Devin Townsend. Mike will be touring in Europe this summer with a trio called the Mike Keneally Report, and touring the west coast in August with his longtime band Beer For Dolphins (who will also appear at Progtoberfest in Chicago this October). In the works is a semi-secret new band project with former members of Zappa Plays Zappa and a current member of Umphrey's McGee. Hey, Mike also appears on a song on Mastodon’s new  album "Emperor Of Sand.”  Visit his website at Keneally.com, and check out Mike’s  recent albums including Scambot 2, Sluggo!, and Wing Beat Fantastic which features songs he co-wrote with XTC’s Andy Partridge. 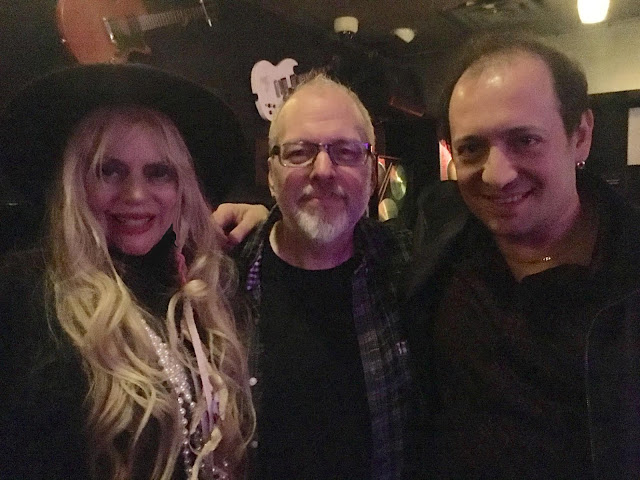 Posted by Anne Leighton at 2:10 AM


For tickets and more information, visit our website at http://www.planetheart.org, or call 212-222-5432 or email earthday@wetheworld.org. 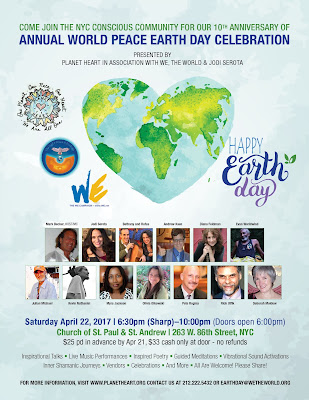 Come join us in NYC for A Very Special Evening with our Conscious Community as we Gather in Unity, Honoring Mother Earth & The New Earth. Listen to Inspirational Talks, Experience Live Music Performances, Inspired Poetry, along with Guided Meditations. Heal, Awaken & Be Ignited through Vibrational Sound Activations & Inner Shamanic Journeys, as well. There will be Vendors, Celebrations & Prayers for World Peace, Planet Earth & All Inhabitants.

Produced by Andrew Kaen in Association with We, The World (fiscal sponsor), and Jodi Serota.

“This is Planet Earth, yet, we are also living on Planet Heart. Where our hearts beat as one - We Are One. We just have to remember. This event is about bringing people together to remember who we are, to heal the world. ” – Founder, Andrew Kaen.