The best new and classic progressive rock bands will headline this incredible three-day rock festival, including:

Jobson Plays UK: Returning to the stage for one night only, ProgStock presents Eddie Jobson and the music of UK as the Sunday night headliner. Best known as the legendary keyboardist and co-founder, composer and producer of progressive supergroup ‘UK,’ and as the world’s top exponent of the electric violin, Jobson’s playing and compositions have been featured on more than 60 albums with such groundbreaking artists as Roxy Music, Frank Zappa and King Crimson, as well as guest appearances with Yes, Jethro Tull and with members of Deep Purple and The Who. Jobson has brought together an all-star band for ProgStock with Jobson on keys and electric violin, Marc Bonilla on bass and vocals, Alex Machacek on guitar, and Thomas Lang on drums.

IQ: With a 37-year history, IQ are widely regarded as one of the world’s most highly respected progressive rock bands. Hailing from England, the band includes Michael Holmes on guitars, Peter Nicholls on lead vocals, Tim Esau on bass, Nick Durant on keys, and Paul Cook on drums. IQ will be headlining ProgStock on Saturday night.

Michael Sadler of Saga: ProgStock’s Friday night headliner, Michael Sadler, is the highly-acclaimed vocalist and frontman of legendary Canadian Prog darlings SAGA, who recently celebrated their final touring year with a special 40th anniversary appearance on the 2018 Cruise to the Edge. With 21 studio albums, awards, accolades and worldwide sales in the millions, Michael is in demand as a featured artist on many outstanding/high profile projects, and is known for his dynamic stage presence and musicianship. Michael’s latest project is a triplet EP with world-renowned pianist Rachel Flowers, who will be joining Michael on stage at ProgStock to perform the songs from their new collaboration.

World-renowned album cover artist, Paul Whitehead, will be exhibiting his work at ProgStock 2018. Known in the progressive world for his work for the band Genesis, including covers for Trespass, Nursery Cryme, and Foxtrot, Whitehead’s art has recently graced the cover of Fernando Perdomo’s debut prog album, Out To Sea.

“For me, painting,” Whitehead says, “is about questioning reality and challenging perceptions.” This is so in his painting “MUSIC?” in which an electric guitar is transformed into a sailing ship sailing towards a very active volcano and asks the question, “Music?” The painting “Music?” became the cover of Perdomo’s Out To Sea. Whitehead will be exhibiting his work and creating paintings and other art pieces live on-site, as he is inspired by the music performances at ProgStock 2018.

“This festival is about showcasing music that’s been around since the supposed ‘end’ of prog,” says ProgStock 2018 promoter Thomas Palmieri. “There’s no clearer way to show the connection between modern prog and classic prog than to show some of classic prog’s most influential elements, like Eddie Jobson and Michael Sadler, while showcasing some of modern prog’s most notable artists, like Mystery and Enchant.”

ProgStock 2018 is capturing a diverse international fan base that includes teachers, physicians, engineers and other professionals who share an affinity for complex rock music. The genre is also attracting a growing number of young people who, largely through internet radio, are getting introduced to progressive rock’s musicianship and complexity.

ProgStock’s Stage will feature music that most rock radio programmers consider too long and intricate to add to their playlists. Terrestrial radio has not collectively embraced a wave of new progressive rock bands since the second British Invasion in the early 1970s made legends of Yes; Genesis; King Crimson; Emerson, Lake, and Palmer; and their peers for elevating the genre to a higher commercial art form. The strong response to ProgStock is already proving there’s more room than ever in today’s musical landscape for a resurgence in a genre of music that began migrating underground in the 1980s.

As Palmieri sees it, the decade that has passed since the demise of the record industry created more opportunity for independent artists to be heard, opening new portals for progressive rockers to rise and flourish.

“The only thing we’re up against is the corporate machine, much of which is excessive in terms of production rather than musicianship,” he says. “If there was any time to bring prog back to the attention of the mainstream listening public, now is the time.”

ProgStock 2018 is sponsored in part by IK Multimedia and The Waiting Room restaurant in downtown Rahway, NJ.

IK Multimedia is a multi-national company based in Modena, Italy, with business units operating in 7 countries: Italy, the United States, the United Kingdom, Japan, Mexico, Brazil and Hong Kong. Their company motto is “Musicians First,” with products sold in over 120 countries utilizing a network of 15,000 resellers and used by millions of musicians worldwide (https://www.ikmultimedia.com).

Nestled in the heart of downtown Rahway, The Waiting Room is Union County's legendary restaurant and bar, providing a welcome sanctuary for all who enter (www.thewaitingroom.us).

Sponsorships are still being accepted. Information can be found on the ProgStock 2018 website:
http://www.progstock.com/2018/contact/sponsorships/. 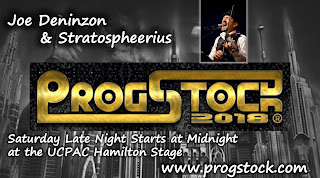 For those who would like to support the festival, donations are being accepted at: https://www.fracturedatlas.org/site/fiscal/profile?id=16273.
ProgStock 2018 is a sponsored project of Fractured Atlas, a non-profit arts service organization. Contributions for the charitable purposes of ProgStock 2018 must be made payable to Fractured Atlas only and are tax-deductible to the extent permitted by law.

Posted by Anne Leighton at 2:54 AM

Joe Deninzon and Stratospheerius' ProgRock Album 'Guilty Of Innocence' will be released on Vinyl format on 4th October via Melodic Revolution Records. 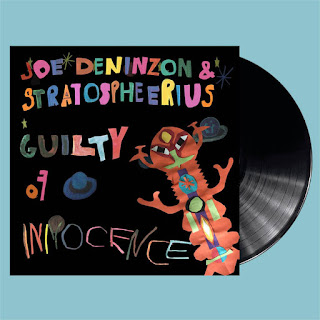 'Guilty Of Innocence', the electric-violin-driven progressive rock album for Joe Deninzon & Stratospheerius, found some surprise support from the European Indie Charts this past Summer and was a breakthrough album in North America, hitting # 4 on the Relix/Jamband radio charts. Released on leading U.S.-based progressive label, Melodic Revolution Records, 'Guilty Of Innocence' is now being released on vinyl on 4th October.

Joe Deninzon & Stratospheerius' single and video for 'Behind The Curtain' is out now on Melodic Revolution Records.
Here's the video!

Progression Magazine writes “Joe Deninzon has made a career...wielding his violin like a guitar. In that way he has pioneered a new standard for rock violin, much the same way Ian Anderson did for Flute.”

Joe befriended legendary Testament guitarist Alex Skolnick in New York City, 1999, when Joe was a teacher at the New School where Alex was studying jazz.  Alex was a guitarist for Stratospheerius for 3 years and 2 albums. Alex says Joe “is amazing on violin and a great musician!” and guests on the 'Guilty Of Innocence’s epic track 'Soul Food'. Along with Alex, Renaissance’s keyboardist Rave Tesar, and Randy McStine (Vinnie Moore, Stu Hamm) contribute their chops to 'Soul Food'. Joe is concertmaster on the new Renaissance Live 'Symphonic Journey' CD/DVD, Annie Haslam spotlighted him as “a talented violin player” in press for their first tour together.

'Behind The Curtain' is the band’s radio track and video. Joe says "it’s about the rise and downfall of celebrity and the dark soul of our society. We have a primal fascination with chastising someone while we ourselves often lead double lives, hiding all kinds of skeletons in our closets while pretending we are faultless. We cathartically project our own demons onto public figures and relish watching someone go down in flames".

Joe is called the “Jimi Hendrix of the electric violin.”

Fans can pre-order the vinyl (and order the digital & CD) of 'Guilty of Innocence' c/o Melodic Revolution Records: https://joedeninzonstratospheerius.bandcamp.com

Posted by Anne Leighton at 2:28 AM

NEVER TAKE LOVE FOR GRANTED Dan Berggren
Shopping in the malls for Christmas. “You’ll never take love for granted if you always give love in return.”  Male bass/baritone and acoustic guitar.  Folk styled.


GOT MY EYE ON YOU SANTA by Jody Quine & the Big Mr. C (Dan Berggren) This flirtatious song has sleigh bells. Like Meghan Trainor, Katrina and the Waves, administered by SHEER PUBLISHING. c/o info@sheer.co.za and+27 11 438 7000.

Posted by Anne Leighton at 4:12 AM