It's that time of year when we love all kinds of people.  Let's face it, we have people we love whole-heartedly.  As for the people that make life harder for us, we pay attention because their stories are unique.   NOTHING AT ALL is a Gentle Giant song about a female crazy maker. It's special because it's a radio edit by mixer to the Prog Stars Steven Wilson.   Every other song is about all the different love we have for all the different people! Happy holidays!!!!

BLUE CANOE BLUES: Phoebe Legere
Roots rock with electric guitar, female soprano. In the winter, there lake is frozen, and she has to wait for the spring when the ice melts to visit her true love. Native American singing including in song.

LEMONADE Alex Boye’: Afro-pop, tenor voice, electronics, joyful. “I used to be bitter, bitter, bitter or you can be better, better, better...Every day is like a brand new day.”  Watch and hear Alex live December 11 on Monday Night Football (Miami VS New England).

NOTHING AT ALL Gentle Giant (Steven Wilson Mix)
A girl who brought her own sadness to her by turning down potential loves. Lyrics:“The girl who has everything, and she has nothing at all.” Kindred to psychedelic Beatles meets Black Sabbath-styled guitar cords. This is a 4:54 radio edit of the original nine minute song.

THE TRUTH I KNOW  Robert Wyckoff
Like an acoustic Marshall Tucker song, with lyrics about believing that people will be nicer. Hoping there will be no more hunger or lies.  My Soul Moves Music co-partner Karen Besbeck wrote this song about having faith in the human race.


Electric violin and guitar-driven rock song about parenting, and missing his son while he's on the road. This month Joe is posting on his social media, asking friends for song ideas for his Spotify list on family, togetherness, holidays, friendship, feel good.

HOLIDAY SONGS
TCHACHKES LATKES Rachael Sage
With violin, this is old school with Rachael’s voice treated. Whimsical lyrics. So good to use: “onions peppers oy gevalt.” "Eight Days of tchachkes, can I have some more please?"

CHRISTMAS IS COMING Leo Schaff
song in motion like lots of people walking fast, upbeat tempo, Beach Boys’ styled harmony.
WHAT CHILD IS THIS the Atlanta Symphony Pops Orchestra & John Driskill Hopkins
A country twist with orchestra from John Driskill Hopkins, singer of the Zac Brown Band. Tempo changes throughout the piece.
** The Orchestra’s and John’s album “The Spirit of Christmas” can be heard at https://soundcloud.com/john-driskell-hopkins

Posted by Anne Leighton at 5:00 AM

Got My Eye on You, Santa Digital Store Links

iTunes: Got My Eye on You, Santa by Jody Quine & the Big Mr. C (Dan Berggren)

Amazon: Got My Eye on You, Santa by Jody Quine & the Big Mr. C (Dan Berggren)

CDBaby: Got My Eye on You, Santa by Jody Quine & the Big Mr. C (Dan Berggren)

Spotify: Got My Eye on You, Santa by Jody Quine & the Big Mr. C (Dan Berggren) 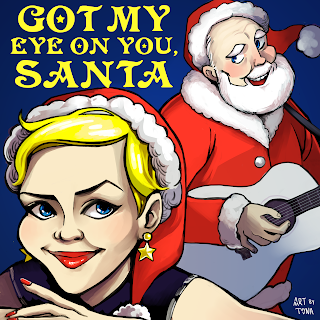 GOT MY EYE ON YOU, SANTA
Performed by Jody Quine & the Big Mr. C (Dan Berggren)
on Optimistic Kitty Records, available digitally, Christmas 2017

Posted by Anne Leighton at 1:43 AM

Black Friday Store Links: Got My Eye on You Santa

iTunes: Got My Eye on You, Santa by Jody Quine & the Big Mr. C (Dan Berggren)

Amazon: Got My Eye on You, Santa by Jody Quine & the Big Mr. C (Dan Berggren)

CDBaby: Got My Eye on You, Santa by Jody Quine & the Big Mr. C (Dan Berggren)

Spotify: Got My Eye on You, Santa by Jody Quine & the Big Mr. C (Dan Berggren)

Posted by Anne Leighton at 3:16 AM

LEMONADE, Alex Boye' Song About Turning A Negative Into A Positive!

If you’d like to help turn around any and all of today’s negativity, listen to Alex Boye’’s “Lemonade.”
Listen to this joyful song that says, “Every day is like a brand new day.”

Alex Boye’’s upbeat performances of pop hits, including Taylor Swift’s “SHAKE IT OFF” and his latest BELIEVE by Imagine Dragons define his empowering attitudes.  His song LEMONADE is an original, and much needed in today’s angry society:  The hook” “I used to be bitter, bitter, bitter or you can be better, better, better.”  Lyrics below.

Alex and his band are touring, currently, as “Artist of the Year” by the Hard Rock Cafe & Pepsi. They play the half-time show for Monday Night Football Dec. 11 (Miami Dolphins VS New England Patriots).

I, first, saw him live July 2015 when he was singing solos with the Mormon Tabernacle Choir in Carnegie Hall.  Alex has previous national TV exposure form appearing on America’s Got Talent in 2015.

I'm just so broke you won't believe
Can't get a dollar out of me
And as far as I can see
I'm losing control like a bad disease
No I just can't get relief
I've been shot down by the life police
And everyday I try to rise
But I can't succeed
Can anybody find a cure for me?
You can be bitter, bitter, bitter
Or you can be better, better, better

Now every day is like a brand new year
I throw my hands up in the air
Like I just don't care
I'm moonwalking down the streets
Feeling like oh yeah (oh yeah!)
Like the bottom of the glass now I see clear
So now I laugh just a little more (Yeehehee!)
I stand much taller than I did before (Yahahaa!)
I know I'm not where I need to be
But I thank God that I'm not
Where I used to be
I used to be bitter, bitter bitter
And now I feel better, better, better

It was on the 2nd of February 1968 at the world-famous Marquee Club in Wardour Street that Jethro Tull first performed under that name. The group would go on to become one of the most successful and enduring bands of their era, selling over 60 million albums worldwide and entering the cultural collective consciousness along the way.

To celebrate this golden anniversary, Ian Anderson will present 50 years of Jethro Tull in summertime U.S. concerts, as part of the worldwide touring schedule.

The debut album, This Was, was released later that same year.  Founder, frontman and flautist, Ian Anderson, is rightly credited with introducing the flute to rock as a front line instrument, not to mention the codpiece!

Jethro Tull are one of the biggest selling Progressive Rock artists of all time, and the group’s immense and diverse catalogue of work encompasses folk, blues, classical and heavy rock stylings. The anniversary concerts will feature a broad mix of material, some of it focussing on the earlier formative period through to the “heavy hitters” of the Tull catalogue from the albums This Was, Stand Up, Benefit, Aqualung, Thick As A Brick, Too Old To Rock And Roll: Too Young To Die, Songs From The Wood, Heavy Horses, Crest Of A Knave and even a touch of TAAB2 from 2012.

Anderson says:  “I am not usually a birthday or anniversary kind of guy but, just for once, I won't be a party-pooper either! I treasure the memories of the earlier years of Jethro Tull repertoire, associated as it is with the adventures of visiting so many countries for the first time to connect with new fans around the world. And this is a celebration of all the 33 band members who graced our ranks - musicians who brought their talents, skills and styles to bear on the performances live and in the studio. Join me and the current band for a nostalgic evening of varied music, representative of my ever-changing songwriting as our careers progressed through the years.”

Formed in 1968, Jethro Tull have released 30 studio and live albums, selling more than 60 million copies worldwide. During their 50-year history, the band has performed over 3,000 concerts in more than 50 countries, playing 100+ concerts each year.

Posted by Anne Leighton at 9:14 PM

Behind The Curtain, song about transparency by Joe Deninzon

Welcome to the circus
It’s your biggest nightmare
Wear the scarlet letter
Scrutinized forever
All the doors are bolted
You can’t find your way home
Everybody knows your name You feel so alone
Put your mask on
And tuck your shirt in
Pay no attention to the
Pay no attention to the man behind the curtain
© 2017  By Joe Deninzon, All Rights Reserved

Posted by Anne Leighton at 1:07 AM