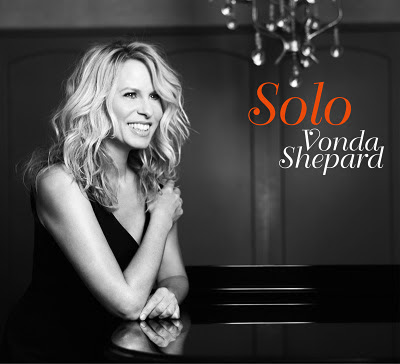 My Vonda story started with seeing her at BB King Blues Club in New York City, and she changed my life, awakened something deep within me. In concert she was singing songs that related to some of my relationship issues and also hit home with all the nostalgia that springs up when dear friends (including pets) die. She was magnanimous on stage--talking with her audience, celebrating people's relationships, and singing her heart out with a natural and powerful voice. She has her own sound that--to me--seems to combine soul and country and pop and jazz in her music. Very earthy presence, and a raw and straight forward alto voice. After the show, I saw how she listened to her fans and took time to get to know them. I had to ask her, "Are you a student of people?"

I realized why David E. Kelley cast her as the bar singer on the TV series, Ally McBeal--she's a person who really listens to others.

VONDA SHEPARD BIO
Vonda and her piano. That's SOLO, the new album which features many of Vonda’s originals ("Lose My Way," "Don’t Cry Ilene," "The Sunset Marquis," "Soothe Me," "I Know Better," ) as well as some favorite cover ballads ("Walk Away Renee" and "You Belong To Me").

SOLO provides the perfect opportunity to get to know Vonda's earthy and accessible style and her intimate interaction with her audience. During the coming year, most of Vonda's shows will feature just her heart, voice and piano. This includes more openers with Sugarland, with whom she’s worked since 2010. The clarity of her voice and the grace of Vonda at her piano on SOLO shows the beauty and richness of Vonda’s music. Says RED at Redhotvelvet.co.uk: “It’d be hard to argue that the Californian is a bad performer. She’s incredible… Shepard gracefully pounds the grand piano and manages to ooze a presence which seeps into the spellbound audience… it’s thoroughly refreshing to see such inherent talent performed naturally with such sunny disposition… Delectable.”

With over 12 million album sales to her name, two Golden Globes, two Emmy Awards, two Screen Actor’s Guild Awards as well as the Billboard prize for selling the most television soundtrack records in history for the hit TV series “Ally McBeal,” Vonda is a world-renowned artist who continues to delight audiences with her magnanimous live performances.  She dedicates songs, tells stories, and—at the same time—projects dynamic charisma and intimacy with her audience.

Just as Vonda's songs reflect an independent woman with profound and self-reflective insights on relationships, her approach to running her career in today's ever-changing music scene is based on that same strength and sense of purpose. She is a consummate artist and businesswoman with her own label, Hotele´ Records.  "I love the idea of making and releasing my own records exactly the way I envision them, then going on the road, getting the music out there and having a blast doing it all.  I have a tremendous amount of energy for music and life.”

Born in New York City, Vonda's family moved to Los Angeles when she was a child, and by age 14, she was performing original material at small L.A. clubs. She played keyboards and sang with Rickie Lee Jones, Al Jarreau, and Jackson Browne, eventually opening for Browne in the U.S. and Asia. She has also performed with the Indigo Girls and The Funk Bros. (a highlight of her life), and she has shared the stage at music festivals with Sting, The Eurythmics, Santana, and Matchbox 20.

"Can't We Try," her duet with Dan Hill, hit number 6 in 1987. In that same year, Vonda secured her first solo deal with Reprise Records and two years later her eponymous album was released. The Top 10 AC Radio and VH1 hit single “Don't Cry Ilene” brought her outstanding and unmistakably bluesy voice to a wide audience and caught the attention of the critics.  In 1992, her follow-up album, THE RADICAL LIGHT was released.

Vonda has always taken a unique approach to her career, attracting everyone from established music artists to television producers to rally behind her. In 1995, no longer with Reprise, Vonda borrowed money (and Jackson Browne's studio) to make her third recording, IT'S GOOD, EVE, and released it independently.  It was this album that caught David E. Kelley's ear right at the moment he was searching for a voice for his new TV show “Ally McBeal.”  Throughout the show’s five year run, Vonda performed on each episode and produced the show's music, recording almost 500 songs featuring artists including Gladys Knight, Sting, Barry Manilow, Al Green, Chubby Checker and Jon Bon Jovi.

Along with her six Ally McBeal Soundtracks, Vonda also recorded BY 7:30, produced by Mitchell Froom (Crowded House, Elvis Costello, Randy Newman). The two went on to make 2002’s CHINEATOWN, FROM THE SUN (2008), and now SOLO.

Most recently, in addition to opening for Sugarland's summer 2010 and 2011 tours, Vonda has been performing at her own international and domestic concerts, plus numerous private and fund-raising events. Vonda has also been in the studio recording her next album.