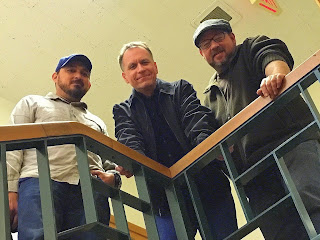 Avant fusionist available for all media
Joe Olnick’s new avant-fusion album, IGUANA is out, and available on every major streaming/download platform online in the world: Spotify, Apple Music, iTunes, Tidal, Deezer, Amazon, Google, CD Baby. Look for the album on Bandcamp, plus CDs through CDBaby. Here's the SmartUrl: http://smarturl.it/4a8362
The media is giving a thumbs up to IGUANA, which is Joe’s 7th album.

Jeff Collins, host of Hard Rock Hell’s radio show, The Rock Jukebox” calls IGUANA “one of the best of the year!  a magnificent album!” KOCF Eugene, Oregon’s Andy Goldfinger says Joe’s album has “that feel of cool. It crosses the boundaries of genre and lets the listener just feel the music." Vents Magazine’s Steve Kinrade offers an eclectic comparison in his review of the album, mentioning its range from musical styles from Yes, Ian Dury, James Brown to an obscure British singer-songwriter named Peter Greenwood. He writes that the album is “worth a thorough investigation.”

Olnick, and bandmates—bassist Jamie Aston and drummer Stew Bradley are performing live, "Our live shows have become a really cool multimedia experience, with custom videos being projected during most of the show. And our concerts have always expanded on themes from the recordings, using exciting improvisational techniques that come from playing for many years. Every concert is unique, and a lot of fun.”


Along with the album release, the group's second track is “Don’s Theme,” an introspective instrumental based on the Iguana (from the album cover) walking into the room in a slow and thoughtful way.

Designed by artist Ron Good (of the horror series, God-Awful Comics), the album art tells the story of a misunderstood iguana named Don, who struggles to find his own hot rock to rest on. Joe says there are parallels of the animal’s life and his career, as it’s a struggle to find support for creating original, instrumental music!

Joe calls his music “avant-jam” and fusion like Medeski, Martin & Wood and New Mastersounds. In addition to guitar, Joe plays sax and bass, plus works as a recording engineer. In 2012, he released his first CD, and continued self-producing with albums from ambient to jazz/rock genres.

Posted by Anne Leighton at 4:39 AM